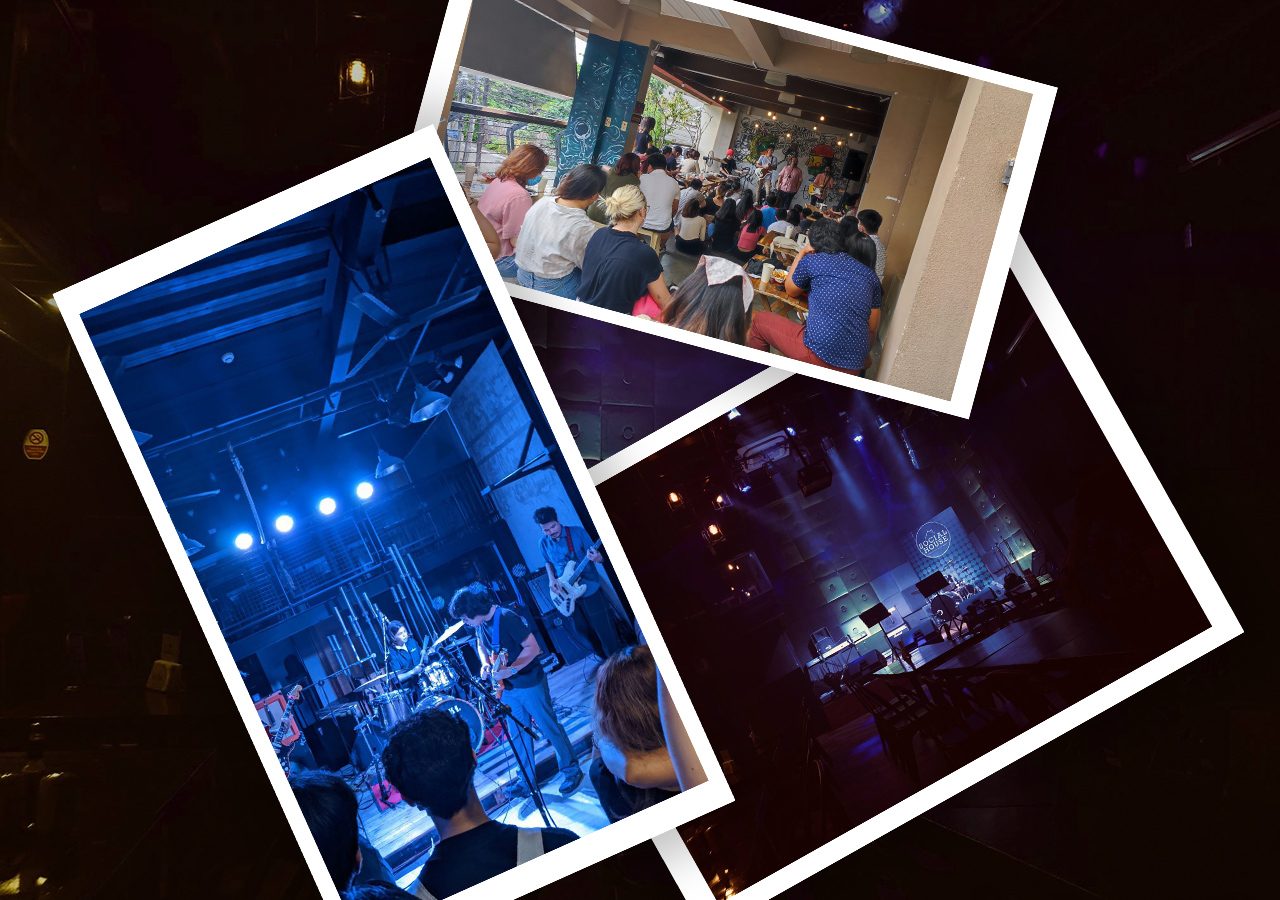 MANILA, Philippines – The pandemic has put many of the metro’s favorite gig venues to rest (RIP Route 196, RIP Conspiracy), but the music has not stopped playing, and today, the gig scene is pretty much back in full swing.

A number of new (or new-ish) venues have opened up around the city, and are quickly becoming the new gig go-tos.

And of course, some oldies but goodies have made it through the lockdown blight and are welcoming musicians and music fans back to their spaces with open arms, as if they’d never left.

If you’re emerging from your lockdown hole and wondering where everyone is going to these days for live music, check out these venues:

Hidden inside the contemporary art gallery Gravity Art Space on Mother Ignacia in Quezon City, Dirty Kitchen is a pandemic-era bar that’s quickly filling the Route 196-shaped hole in the hearts of Northside music fans – but make it hipster. The space has played host to an EP launch, a silent film concert, club nights, indie musicians, and ~cool kids. This bar’s mystery is part of its charm – it’s so elusive, in fact, that you can barely find any photos of it, and it doesn’t have its own social media page.

Social House has held its space at Circuit Makati for years, and it’s always served up live music with acts like The Bloomfields, Brownman Revival, and South Border taking their stage. Recently, it seems to have become the gig stage du jour, hosting both up-and-coming musicians, well-loved acts, and even drag queens (the Divine Divas and Marina Summers are performing there on November 17!)

Once located along Pioneer Street in Mandaluyong, this gig venue has moved to a new, near-ish spot in Mandala Park along Shaw Boulevard. The semi-open space is smaller than it used to be, but it’s also become busier, with seemingly everyone from Clara Benin, to Cheats, to Ebe Dancel, to Itchyworms to Alisson Shore playing there. It’s standing room only at 123 Block so it gives off strong concert vibes, but they’re also pet- and kid-friendly, so your little ones of any species can tag along.

This bar in Poblacion, Makati celebrated its third anniversary in August, but it only recently reinstated its themed live music nights. Get some face-to-face time with some soulful guitar on Blues Night every Wednesday with the likes of the Bleu Rascals, or jazz it up on Thursday Jazz Nights with artists like Gaia and Andrei.

Gig-goers might already be familiar with this café along Maginhawa Street in Quezon City. It’s been showcasing live music since before the pandemic, and is back on the scene now that things have opened up again. The space is particularly friendly to indie bands, singer-songwriter types, and anyone else whose music might be described as “stripped down” or “chill.” Their “tanghalian gigs” are perfect for early birds and junior titas who don’t like staying up past 10 pm. They also occasionally have open mic nights, so the next gig you catch there could be yours.

This space located on Guijo street in San Antonio Village, Makati is, for lack of a less overused word, iconic. It’s been featured in a film (Ang Nawawala). It’s seen some of the biggest names in OPM perform within its walls (UDD, IV of Spades, Imago, practically every member of Eraserheads, even Gary Valenciano), with some even calling it home. People were genuinely scared that it would go the way of other bars under those strict lockdowns, but it didn’t, and it’s come back to life with the likes of Sandwich, Bita and the Botflies, Autotelic, and Munimuni recently taking the SaGuijo stage.

Another Northside favorite, this bar in Anonas has been around for DECADES, and now it’s dusted off the quarantine cobwebs to bring live music back to its space. Music legends like Noel Cabangon, Yano, the Eraserheads, and Parokya ni Edgar have all played this venue at some point in their careers. Recent performers include Tanya Markova, Blaster and the Celestial Klownz, This Band, Mayonnaise, and Ebe Dancel, and coming up is a gig featuring Wolfgang’s Basti Artadi.

Like many bars in the pandemic, Mow’s took quite the hit at the height of lockdown. But after their grand reopening in June, this beloved live music venue in Matalino, Quezon City, has come back swinging, with a packed event calendar every week. Mow’s gig line-up has something for everyone – recently they held cover nights for Blink 182, Yellowcard, and Dashboard Confessional, a stand-up night with comedians from Comedy Manila, and even a gig/panel discussion to raise awareness on the Hacienda Luisita Massacre.

Located along the East Service Road (KM 19, hence its name) in Muntinlupa, this spot has always been the go-to live music venue for people in South Metro Manila, thanks to its wide space and great acoustics. These days, while they will occasionally feature younger acts (Ena Mori and Fern., for instance), their gig line-up is more on the old-school side, with acts like MYMP, Paolo Santos, Side A, and Freestyle regularly playing. – Rappler.com