MANILA, Philippines – GMA actress Glaiza de Castro came to the Manila concert of Japanese band One OK Rock (OOR) on Monday, January 29, with tickets not just for herself but for a fellow OOR fan, Joanne Kaye Mercado.

They didn't know each other before this, but Glaiza felt she just had to give her a free ticket to the concert.

On Sunday morning, January 28, Joanne posted on the fans' Facebook group – Philippines One Ok Rockers (POOR) – about how heartbroken she was after losing her money on her way to buying a ticket a day before the concert. 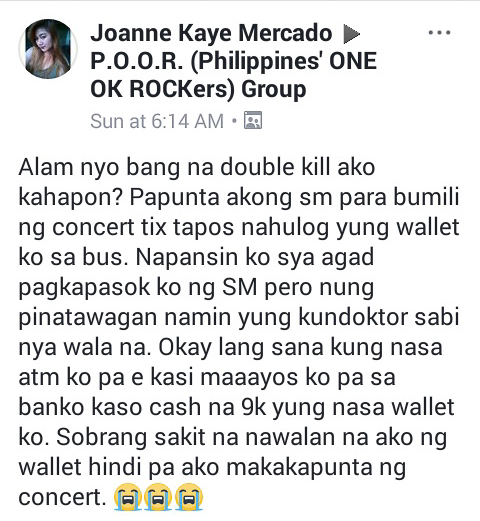 A little over an hour later, Glaiza posted on Twitter that she had an extra ticket to OOR's "Ambitions" concert, and wondered whether she should sell it or give it away to a true blue fan of the band.

Another fan noticed Glaiza's tweet, took a screenshot of it, and posted it as a comment on Joanne's post. Immediately, more fans commented that they should help Joanne get that free ticket by posting the screenshot of her post on Glaiza's social media accounts.

A few hours later, the actress revealed that she was touched by the support of other fans for Joanne, and decided to give her the extra ticket.

Glaiza and Joanne did not reveal how the ticket would be handed, but the GMA star was herself early at the Mall of Asia Arena. Wearing the official OOR "Ambitions" tour shirt, she had her photos taken with the other fans who had lined up to see to watch Taka, Toru, Ryota, and Tomoya of One OK Rock perform.

Joanne, meanwhile, posted a message of thanks to the fans who helped her out, saying she knew there were many other fans who wanted Glaiza's free ticket, but she was touched that they tried to help her out.

(Because it's easier to wish that the ticket would go to you, because we all want to go, but you helped me out anyway. Earlier, I said that whether or not I'm chosen, it's okay. I will never forget this.) 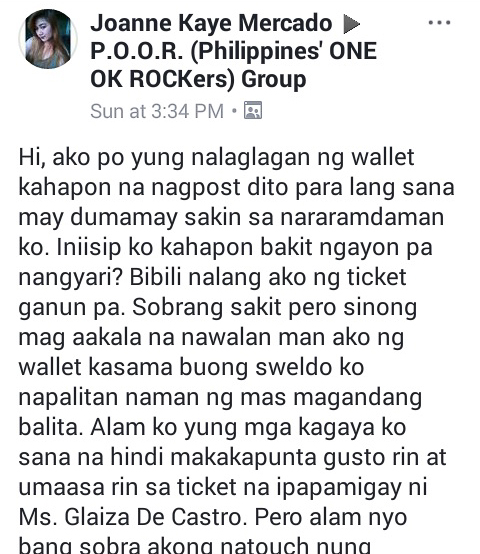 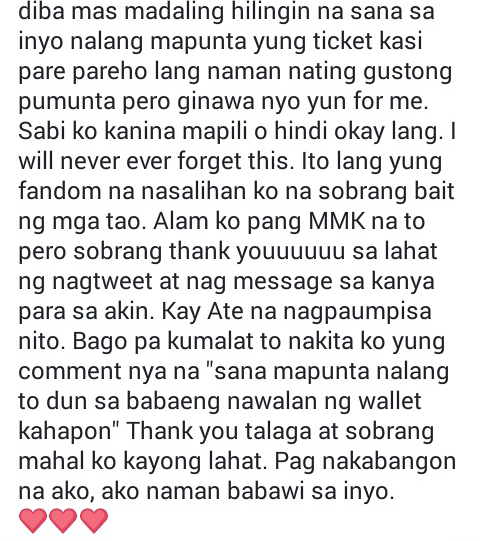