Facebook Twitter Copy URL
Copied
The P-pop Kings live up to their name, and are listed alongside other iconic groups like BTS, The Beatles, Backstreet Boys, and One Direction 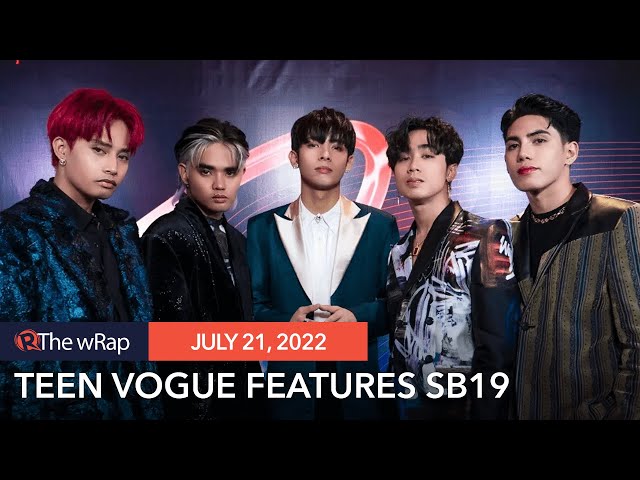 On Thursday, July 14, Teen Vogue published an article entitled Our Favorite Boy Bands of All Time, listing 33 global groups of various music genres and eras, in no particular order.

SB19 was the 18th band to be named on the list, sandwiched between Latino pop group Menudo and American R&B group All-4-One. The article also mentioned the Pinoy group’s hit “Bazinga” and featured the official video for “What?”

Joining them on the list are other iconic boy bands like BTS, The Beatles, One Direction, Backstreet Boys, Westlife, *NSYNC, and The Jonas Brothers.

This is not the first time that the “MAPA” singers were featured in the teen magazine. Their hip-hop single “BAZINGA” was praised as “a hallmark of a great 21st century pop smash” in Teen Vogue’s Best New Music Friday in 2021.

SB19 is the first Korean-trained Pinoy idol group to appear several times on Billboard charts, such as the Social 50 list. They made history as the first Southeast Asian act nominated for Top Social Artist in the 2021 Billboard Music Awards.

Another milestone for the idol group was their reign in Billboard’s Hot Trending Songs chart in December 2021. Their song, “Bazinga” surpassed BTS’ “Butter” and “Permission to Dance.”

Since debuting in October 2018, SB19 rose to fame with their viral song “Go Up,” which expanded their loyal fanbase, A’TIN, from local to global. The National Commission for Culture and the Arts (NCCA) also named the group Youth Ambassadors for their worldwide influence and promotion of Filipino culture.

The “Alab” singers held the “Our Zone” concert, their first solo show, at the Big Dome in November 2021 and performed at the 2022 Pinoy Pop Convention (PPOPCON) alongside other groups like BINI and MNL48.

The five-member music sensation, formed in 2016, comprises of members Josh, Stell, Ken, Justin, and Pablo (formerly known as Sejun). The group’s leader rebranded to Pablo, as a variation of his birth name, in the group’s “Ikalawang Yugto (New Era)” trailer. SB19’s other hits include “SLMT,” “Hanggang Sa Huli,” and “Mana.” – with reports from Sydney Cañamo/Rappler.com