Most of the excitement happened when host Steve Harvey misread the winners announcement and Miss Colombia was crowned instead. But what happened before that?

Let’s have a look.

The night started out with the ladies walking the stage in their national costumes. This portion of the show was pre-taped, it was filmed after the preliminary competition on Wednesday, December 16, (Thursday, December 17 in Manila). After the national costume show, the Top 15 contestants were announced. Check out some of the girls’ costumes below: The 10 ladies then walked the stage in their evening gowns as The Band Perry performed “Live Forever” and “Done.” The Top 5 contestants – France, Colombia, Philippines, Australia, and the USA – were announced afterwards. The question and answer portion came next. The Top 5 contestants were asked about current issues affecting their countries, such as terrorism, gun laws, and the legalization of marijuana. The Top 3 were announced after – Philippines, Colombia, and USA. Before the announcement of the winners, the Top 3 walked the stage one last time as Seal performed. They were each asked why they should be Miss Universe. USA was named the second runner-up, Philippines the first runner-up, and Colombia Miss Universe. But after Miss Universe 2014 Paulina Vega passed the crown on to Colombia’s Ariadna Gutierez, Steve went back onstage and apologized. 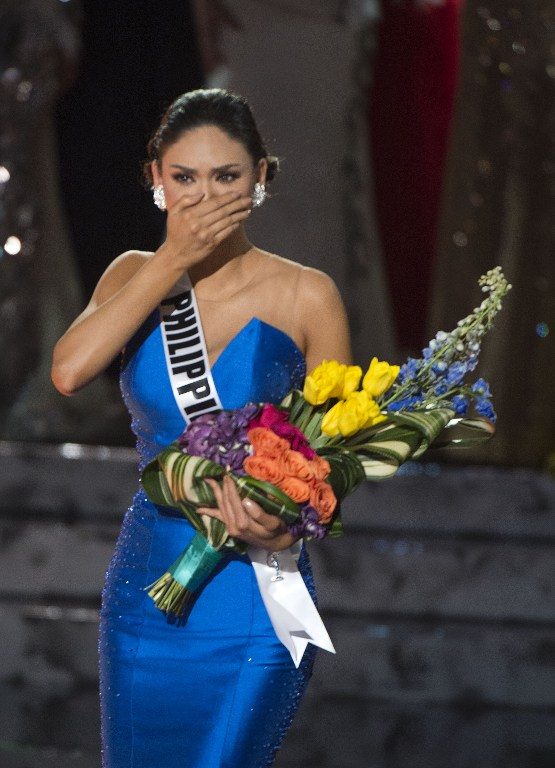 Paulina took the crown back from Ariadna and passed it on to Pia instead.