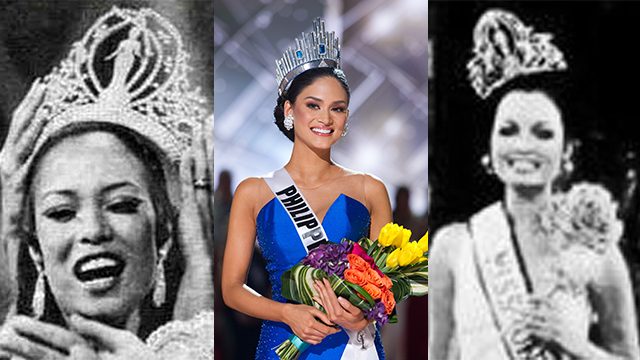 Facebook Twitter Copy URL
Copied
Margie and Gloria talk about the error in the announcement, while other former Miss Universe bets also chime in

MANILA, Philippines – After the Philippines’ Pia Wurtzbach won the Miss Universe crown on Sunday, December 20 (Monday, December 21 in Manila), Gloria Diaz and Margarita “Margie” Moran shared what they thought about her win and the announcement mix-up.

Gloria and Margie – both Miss Universe winners and Philippine representatives – spoke in an interview with ABS-CBN’s TV Patrol.

Gloria praised designer Albert Andrada for Pia’s evening gown, and commented on her answers in the question and answer portions.

For the first question and answer portion, Pia was asked whether or not she thought that the US should have military presence in the country.

Pia answered: “I think that the United States and the Philippines have always had a good relationship with each other. We were colonized by the Americans and we have their culture in our traditions even up to this day, and I think we are very welcoming with the Americans, and I don’t see any problem with that at all.”

“The first answer was, for me, iffy,” said Gloria. “Playing to the Americans. That’s fine. Of course I love America – take me with you,” she added, laughing. “But the second answer was really very inspired, and I think that’s what clicked.”

For the second question, Pia was asked why she should be the next Miss Universe. After speaking about issues like HIV/AIDS, Pia finished, “I want to show the universe that I am confidently beautiful with a heart.”

On Margie’s end, she said of Pia’s performance, “She answered very well. She’s very confident, a very good review, I think, for her personality.”

During the coronation night, host Steve Harvey initially announced that Miss Colombia Ariadna Gutierrez was the winner. After she was crowned, Steve went back onstage, explaining that he misread the card and that Pia was actually the winner.

“He should pay a fine!” she added. “Hundred thousand dollars, right? To both. To Miss Colombia and to Miss Universe for the faux pas.”

But later in the interview, Gloria said: “My heart went out to Miss Colombia. I can’t imagine taking off the crown and putting it on somebody else.”

Margie, meanwhile, sympathized with both Ariadna and Pia. “I feel sorry for both candidates, and for Miss Philippines, her glory was stolen from that moment. She didn’t even get to walk in the aisle. Nevertheless, she still won.”

Margie said that the mix-up distracted from the win. “I think it would take time before we forget what really happened and we’ll focus on who the real winner is.”

The Philippines may have only won the crown 3 times, but we have come close in recent years.

Here’s what they had to say:

Venus Raj, the 4th runner-up in Miss Universe 2010, thanked Pia for the win.

@PiaWurtzbach wwaahhhh!!!!! Thank you for making our dreams come true!!!!

Shamcey Supsup was 3rd runner-up 2011. She expressed her excitement over the win on Twitter.

OMG OMG the Universe is finally ours!!!!

Janine Tugonon commended the team that trained Pia for the pageant, Aces and Queens. Janine was Miss Universe 1st runner-up in 2012.

Mary Jean Lastimosa, who made it to the Top 10 in 2014, congratulated Pia.

A blue gown fit for a blue crown! All the stars in the universe aligned for you @piawurtzbach Congratulations! Our 3rd Miss Universe from the Philippines ❤️