Jan 23, 2017 3:50 PM PHT
Pia Ranada
Facebook Twitter Copy URL
Copied
To the beauty queens, President Rodrigo Duterte says, 'Aside from the worries of governance, all the troubles in the world, when we look at you, we forget the universe' 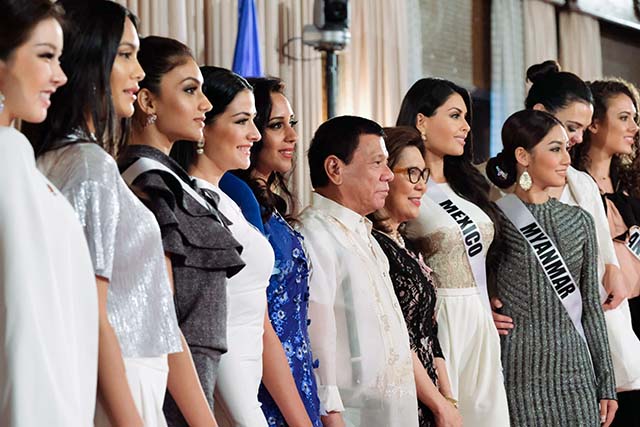 MANILA, Philippines – “I wish this day will never end,” said President Rodrigo Duterte as he looked around the room full of Miss Universe 2016 candidates on Monday, January 23.

That day, 84 of the candidates paid a courtesy call on the President in Malacañang. Duterte, who has never hesitated in showing his “appreciation” for women, was all compliments for the beauty queens in front of him.

“I must say that God is really good. Aside from the worries of governance, all the troubles in the world, when we look at you, we forget the universe,” he said.

The President could not help but add to his written speech. With a glass of water in his hand, he said, “That’s the end of my speech but there’s something more that I must do. May I just give you a toast, by myself, to your beauty and to your brains. Mabuhay kayong lahat (Long live all of you).”

Eighty-four out of 86 candidates occupied half of the seats of the historic Rizal Hall for the courtesy call, which took place a week before the much-anticipated coronation on January 30.

Two candidates, Miss Finland and Miss Switzerland, were absent from the event because they were “not feeling well,” said Malacañang staff.

Tourism Secretary Wanda Teo said after the event that many of the candidates have had to adjust to the Philippine heat.

After his speech, Duterte shook hands with each of the contestants and posed for photos with them in batches.

Medialdea admitted to Rappler that he was “more excited” about meeting the beauty queens than about the Cabinet meeting to be held later that day.

Also present were Miss Universe Organization officials and former Ilocos Sur governor Chavit Singson, who led the fundraising efforts for the Philippines’ hosting of the pageant.

Before the courtesy call, the candidates had lunch at the Presidents’ Hall with Miss Universe Organization officials.

Duterte, known to have made controversial statements about women, has been invited to watch the January 30 coronation.

But Teo said his attendance is not yet confirmed. – Rappler.com