More Bb Pilipinas 2017 predictions: Who will win a crown? Note: The piece below was first posted in Norman Tinio’s blog. It is republished here with his permission. Another set of predictions, from pageant writer Voltaire Tayag, can be found here.

Late last month, it finally dawned on me how the Philippine pageant sphere has been sharply split into several competing combinations for the new Binibining Pilipinas 2017 titleholders. Just when I thought that I have assembled an almost perfect batch of titleholders and runners-up, small but significant factors toppled the foundation for my fearless forecast. Thing is, whoever I put on top and in the succeeding placements will not necessarily jibe with that of others. So to lessen the stress bogging me down of late, I covered my ears, focused on my personal notes/assessments, and came up with what I believe could be my best possible winning combination.

One factor that I enjoy as your blogger is the friendship I established with all of the binibinis – something that is neither deep nor superficial, but enough to give me precious hints on the 6 contenders who deserve to be glorified in the end. At first, camp affiliations threatened to sway me back and forth. Believe it or not, I consciously distanced myself from both to keep my eyes focused on the personal merits of each one and not be influenced by who handles who, or whose clout could be more extensive than the other. I also moved away from the “independent” angle because it only tends to muddle the whole process. 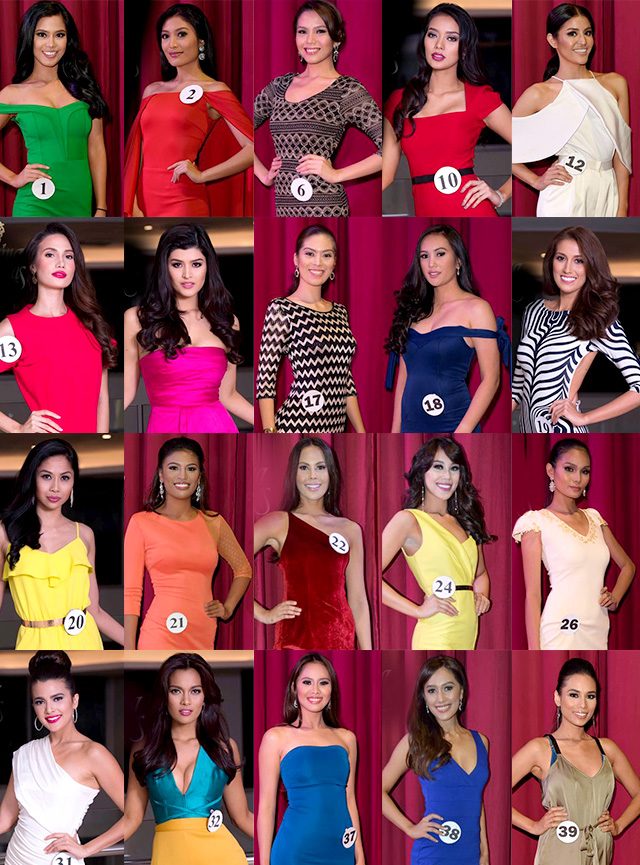 Dear readers, it took me a long time to build the binibinis included in the first cut of my predictions. Here now are my Top 16 (I couldn’t go lower than this number anymore) for Bb Pilipinas 2017, arranged according to their assigned numbers first: You know too well that nobody can make instant guesses on who are guaranteed to ace the question and answer (Q&A). But if your main basis is the ABS-CBN primer shown on April 23, then it would be safe to speculate that a good majority of the 16 binibinis above will perform very well – unless the unexpected happens and those deemed to easily deliver will buckle under extreme pressure.

There is that one crucial minute where anything can happen. It may depend on which judge will ask the question or what question will be asked of a particular candidate. However, at this juncture, the favored ones are already starting to shape up as the eventual winners and they simply need to give a decent job of answering. One or two may surprise the judges and the audience, but if they don’t belong to the “initially chosen” (keep in mind that the closed door panel interviews are crucial), then the anticipated judges’ deliberations (in the presence of key Binibining Pilipinas Charities, Inc officials) afterwards seal (or unseal) whatever their placements will be.

Before moving on, let me make mention of the 9th and 10th placers on my list who nearly entered the winners’ circle but were still edged out due to the high level of competitiveness and consistency in this batch. They are Katarina Rodriguez and Arienne Louise Calingo, respectively.

My top 8 in reverse order

I placed Sirene Sutton and Dindi Pajares as my First and Second Runners-up, respectively. I need not explain the importance of these two positions. With no titles – save for the status of being ladies-in-waiting – to show off, they can immediately rejoin next year and capitalize on their inclusion in the winners’ circle for around 10 months. Both ladies are crown-worthy, but given the company of binibinis they are in, I wouldn’t mind seeing them compete again in 2018. Sirene still needs to comfortably get out of the professional model look and mold that sticks to her skin like super glue. Dindi, for her part, has stayed the same as last year – brightly competitive, but still missing that one note to fully break into the game of crowns. For the 6 titles, I have narrowed down the selection to an equal number – Maria Angelica de Leon, Charmaine Elima, Rachel Peters, Nelda Ibe, Chanel Olive Thomas and Jehza Huelar.

I can see Jehza Huelar getting the Miss Globe Philippines crown from Nichole Manalo. Jehza has proven that despite having such a strong lineup to deal with, she can still rise to the occasion and pocket a victory. She has really leveled up from 2016. I may have pinned her to the least-aspired sash among the victors, but it is an achievement that will stay in her credentials forever. What’s more, her easy-to-work-with attitude is a trait that needs no further proof. Chanel Olive Thomas is my pick for Grand International. This one is the result of a very close tussle between her and Arienne Louise Calingo, whose fluency in Thai is an edge nobody else can claim to. It is her biggest ace to get on the good side of Miss Grand International president and founder Nawat Itsaragrisil in the bigger mission ahead. But Chanel has a playful charm and cheerful disposition that she can use to her advantage. Given that both ladies can express themselves better than most, this is what the Fil-Aussie displayed to nose out the multi-lingual Kapampangan. Supranational-wise, Nelda Ibe is the lady I can see taking the spot to be vacated by Joanna Eden. It’s no secret among some near-insiders that this gorgeous natural beauty is one of those wearing a halo (since day one, almost) of admiration from those who matter. She could easily upset the stronger favorites if getting into auto-pilot mode (pun intended) can be avoided. I can honestly see her making waves in Poland or any other European country where Miss Supranational 2017 will be hosted. She has always mesmerized me during our encounters, and relying only on photographs to size up her chances will be a great disservice to what she is capable of delivering up close and personal. I have placed Rachel Peters for the Intercontinental spot for more than two weeks now. The competition abroad remains unpredictable in terms of their choice for a big winner, and I still believe that Jennifer Hammond was unfairly upended in Sri Lanka last year. So sending Rachel to wherever the next edition of Miss Intercontinental will take place should be a good risk. She has the qualities that could make the organizers sit up and take notice, the same way they did when Christi McGarry competed and placed 1st Runner-Up.

Who knows, she could really be just what the doctor ordered for the competition – a woman of racial mix with the right amount of saucy allure. And now we’re down to the two highest titles of the Bb Pilipinas season – Universe and International. Two beautiful ladies stand before me, each with their distinct qualities that have made them the last two binibinis standing – Maria Angelica de Leon and Charmaine Elima. Any one of the two would make an excellent representative to the 66th Miss Universe, the same way that either one of them can go for a still impossible back-to-back win in Japan for Miss International. So who will stay in the country longer and be kept in suspense as to where Iris Mittenaere will crown her successor? And who goes with Kylie Verzosa to Tokyo and be constantly pressured to compete for a title that her compatriot is currently holding?

Maxine Medina moves forward and stops on the side of your #15, Maria Angelica de Leon, and leaves Charmaine Elima in the arms of Miss International 2016. Except for the unstinting focus and dedication to win, Charmaine is like the antithesis of Kylie Verzosa in more ways than one. And I’m all for taking the risk of sending to Japan a safe opposite of the reigning winner. Maria Angelica de Leon, you are the new Miss Universe Philippines for me! It is you I see being dramatically transformed for the Universe. That is where I am pulling out all my defenses in your favor. And the achievable vision is starting to excite me. This much I can say – your detractors ain’t seen nothing yet. Norman Tinio started pageant-blogging back in 2009 but has been an avid pageant enthusiast since the early 1970s. Apart from that, he is an Industrial Psychologist by profession, movie addict by nocturnal choice, and an ex-seminarian who can pray in ancient Latin. You can always find him and his daily musings at normannorman.com.