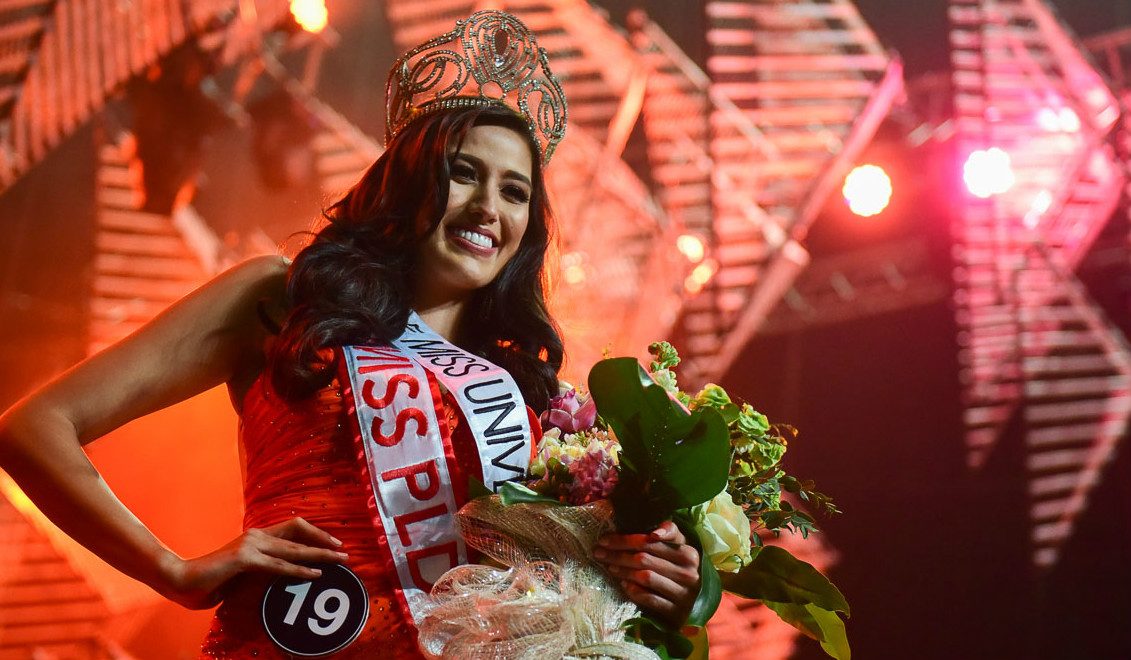 Rachel, 25, is now tasked with continuing the country’s winning streak, after Pia Wurtzbach’s historic winn 2015 and Maxine Medina’s top 6 finish in the 2016 competition.

Get to know Rachel, our new Miss Universe Philippines, by reading a few facts about her below!

1. She competed in Miss World Philippines.

Before she entered Binibining Pilipinas, Rachel joined the Miss World Philippines 2014 pageant, where she placed 4th Princess to Valerie Weigmann. 2. She loves the sand and sea.

If you look at her Instagram, you’ll discover that Rachel loves the beach and the water. Check out some of her photos below!

Home from a much needed break!Siargao I love you

First surf with this baby

Rachel loves dogs and posts a lot of photos with her pets.

4. She represented Camarines Sur in the Binibining Pilipinas 2017 pageant.

On Instagram, Christi wrote about Rachel: “A long night, but well worth the wait! Congrats to my girl [Rachel Peters] for winning the coveted Binibining Pilipinas Universe crown! So happy I had the chance to award her as ‘Face of Binibini’ during one of the special awards segments earlier in the competition, when I got to whisper to her ‘You’re gonna win, babe.’ I knew from the beginning that you could do it, well-deserved!”

A long night, but well worth the wait! Congrats to my girl @rachelpetersx for winning the coveted Binibining Pilipinas Universe crown! So happy I had the chance to award her as “Face of Binibini” during one of the special awards segments earlier in the competition (swipe left for photos!) where I got to whisper to her “you're gonna win babe…” I knew from the beginning that you could do it,  well-deserved!!! . . Fun fact: Rachel and I both shared the same Binibini #19 contestant number and both represented our province of CamSur! So proud of you!!! #MissPhilippines #teamphilippines #bicolana #binibiningpilipinas #bbpilipinas #bbpilipinas2017 #beautyqueens #winner #proudofyou #camsur

5. According to her Bb Pilipinas profile, Rachel completed her International Baccalaureate at the British School in Phuket, Thailand, and graduated with a Bachelors degree in Business, Tourism and Events from La Trobe University in Australia.

I did it!!!  happy to have had my mum @anitasplendita and man @chris_herrod with me today!

On he Bb Pilipinas video profile, Rachel said that she’s always been active in organizing events, including concerts.

“I’ve been living and breathing events for as long as I can remember. I’ve been lucky enough to work with artists such as Katy Perry and Christina Aguilera,” she said.

Check out Rachel’s video from Bb Pilipinas below, where she talked about how she usually spends her Sunday afternoons.

Aside from Rachel’s family, another special person cheered for her at the Smart Araneta Coliseum on coronation night – her boyfriend Migz Villafuerte, the governor of Camarines Sur.

In an interview with reporters after coronation night, an overwhelmed Migz compared Rachel’s win to his victory during the 2016 elections.

“So excited for [Rachel Peters] by far, you are the most genuine, sexiest, and most beautiful of them all. So proud of you!”

so excited for @rachelpetersx! by far, you are the most genuine, sexiest and most beautiful of them all  so proud of you! lets goooo Before winning Miss Universe Philippines 2017, Rappler asked why Rachel decided to to join the competition.

She answered: “Since joining Miss World, I’ve always had some people messaging me, ‘Please join. Why don’t you try?’’ And there’s always been a prestige that comes with being a Binibini. And I’m 25 and so I thought this was kinda my last chance and my last shot. And so I’m here and I’m gonna give it my all.” (READ: Bb. Pilipinas 2017: The crossover candidates)

Binibining Pilipinas candidates are required to be between the ages of 17 to 26 at the time of the pageant in order to compete.

Rachel did give it her all, nabbing some of the special awards during coronation night aside from the honor of representing the country in the Miss Universe 2017 pageant.

We’re wishing her all the best as she trains further in the next few months for the competition ahead! – Rappler.com