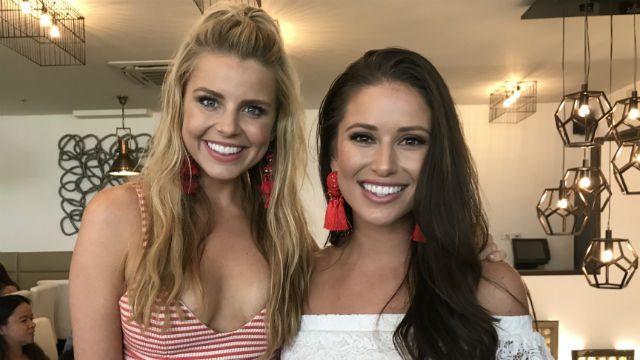 MANILA, Philippines – With a little over a month before Miss Universe 2017, beauty queens from all over the world are busier than ever preparing for the pageant. According to Miss USA 2014 Nia Sanchez and Miss Australia 2014 Tegan Martin, there are 2 things you need to do to snag the crown: be yourself and come prepared.

Rappler caught up with Nia and Tegan during a meet and greet, hosted by PLDT, on October 10. Fresh from their fun adventure in Palawan, where they spent most of their time snorkeling and island hopping, the beauty queens looked back on their pageant days.

Cheers to the freakin weekend (singing it as I type. lol) As I'm approaching my last few day on the trip, I just wanted to say, thank you for all the insta love. It truly means a lot to me, especially since I know I'm blowing up your insta, and that can be annoying sometimes.  Thank you for all the love and support from all over the world Y'all warm my heart . #ItsMoreFunInThePhilippines #WatchNiaAndTegan @tegan.martin #TravelWith_Nia @onelifeadventures @tourismphilippines

When they were just starting out, Nia and Tegan recalled that they hid their personalities and pretended to be somebody they’re not to please the judges.

“It was 5 years of competing over and over again. I think I became my best when I was a 100 percent me and I wasn’t trying to be what I thought the judges wanted. I did that for so many years. The judges wanted a blonde? I dyed my hair blonde!” Nia shared. “I had the exact same experience. I competed twice and then on my third attempt, I won. I’ve been overthinking everything. I’ve been thinking way too much about what other people expect me to be. The final time I competed, I was just Tegan and I’m very humorous. I’m not a very serious person. I love laughing. I love making jokes. I went back as that Tegan and that’s when I won. That’s my biggest piece of advice. Just stay true to who you are,” Tegan added.

However, being prepared is just as important. After winning Miss USA 2014, Nia recalled that she trained for over 6 months for Miss Universe. During this time, she worked on her runway walk, practiced answering thousands of interview questions, and kept up with current events.

“Be a thousand percent prepared. The more important thing is your mind and where you are with yourself, but you better have practiced your runway walk a thousand times, practice a thousand interview questions, but still not change who you are. You don’t want to show up and be happy mentally but not be prepared for everything else. So be prepared and be yourself and you’re golden,” Nia said.

Currently, there are over 80 contestants vying for the Miss Universe crown. With such a slim chance, Tegan emphasized the importance of having a back up plan.

“There are so many girls that get disappointed by pageants. When they don’t win, they get so down and they don’t ever want to think about the word pageant again, But I always think it’s 30 girls’ dream, because there are 30 girls in the finals in Australia, but one girl’s destiny. It was meant to be part of the path for one girl. It’s not meant for everyone. It will happen to who it’s supposed to happen to.”

“You have to have other goals and dreams as well. You can’t think that ‘I don’t win that my life is over.’ Think about what you can do if you don’t win. It’s not the only way to be successful.” This year, the 66th Miss Universe pageant will return to Las Vegas, USA. While excited for her hometown, Nia still feels dejected after reading reports about the recent Las Vegas shooting.

“It breaks my heart, the whole situation that happened. Las Vegas is hurting right now but there are always good people. I’ve always been told when I was little, when something bad’s going on, look for good people, ‘cause there’re always good people who are going to help others.”

On what’s keeping them busy

Nia and Tegan started Universal Confidence, a series of workshops that aims to help girls struggling with low self-esteem. “We talk about how to be confident in everything, not necessarily pageantry. We talk about interviews, relationships, and body image.”

Apart from Universal Confidence, Nia and Tegan are also busy working on their individual careers. Both of them have several hosting gigs lined up. Tegan is hosting an event at the Melbourne Cup, which is one of the biggest horse-racing event in Australia, while Nia has recently landed a segment on a TV show. –Rappler.com