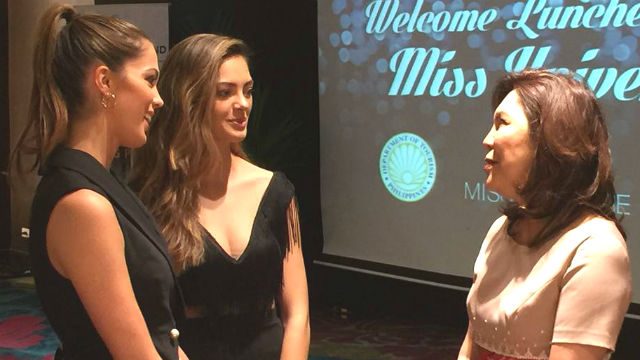 In an interview with the press at the Jollibee Biopolis branch on Thursday, December 7, Demi-Leigh, who became South Africa’s second Miss Universe title holder in 4 decades, said she was thrilled to be in the country and also spend time with kids from the Kanlungan sa Er-ma, a non-governmental organization for children.

“It’s so amazing and so heartwarming to see all of the people around us….Everyone just wants to feed me and and give us nice things so I think it just [embraces] how wonderful the people, the spirit in the Philippines are. And I think to be able to share the spirit of the holiday and the Christmas season with the kids is just great,” she said.

Demi-Leigh also talked about the advocacies she will push for. Aside from working with groups tied with Miss Universe such as Smile Train, Demi-Leigh said she wants to focus on empowering women and kids. Back in South Afica, she started a program called #Unbreakable, where they teach women how to defend themselves. (READ: Meet Miss Universe 2017 Demi-Leigh Nel-Peters)

“I would like to focus on empowering women and children by giving them skills nad knowledge on how to overcome difficult situations and how to prevent difficult situations. I think it’s very important and real problem all over the world today,” she said.

Demi-Leigh also mentioned during a press conference on Wednesday, December 6, that aside from her advocacies, the issue of HIV-AIDS is also a program she wants to be involved in since it continues to be a big problem in South Africa/

Iris, who won the title in Manila in January, said that she was fortunate to be back in the country which has a special place in her heart.

“I feel so happy to be here. I was waiting for this moment since almost one year,” she said. “So I feel happy, I feel like a little bit like home.”

Miss Universe Demi-Leigh Nel-Peters on the advocacy she wants to pursue. pic.twitter.com/uHmHGr9Y0n

“I’m so excited about everything but I want to know more. I want to travel more around the Philippines so that’s why I’m here and I’m very happy.”

Iris has returned to France since crowning Demi-Leigh  in Las Vegas on November 26. She also said that will still be busy with a number of projects but her focus will be to finish her studies. Before she became Miss Universe, Iris was a dentistry student.

Prior to their visit to Jollibee on Thursday, Demi-Leigh and Iris also had time to spend with selected fans during a lunch hosted by Tourism Secretary Wanda Teo at Dusit Thani. The visit of the candidates is part of the Bring Home a Friend program, which was relaunched in October. (WATCH: Piolo Pascual performs DOT ‘Bring Home a Friend’ theme song) The ladies are set to visit 3 locations in the country before flying back to their respective countries. – Rappler.com