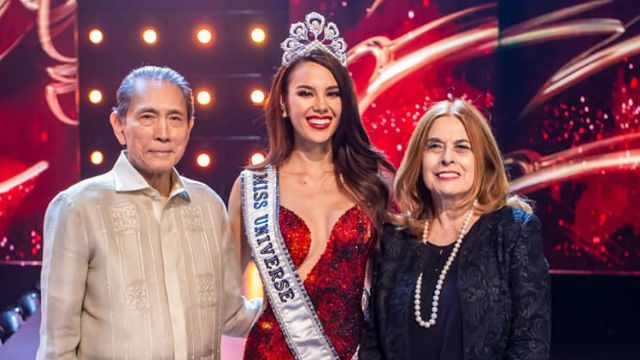 MANILA, Philippines – Binibining Pilipinas Charities Inc (BPCI) chairperson Stella Marquez Araneta put to rest reports that the Miss Universe franchise is no longer under the group. On Thursday, January 3, she told reporters that they are still working with the organization.

“Well, it’s still with us,” she said when asked about reports that the franchise had been given to another company. “If some people say something else, let them talk about it.”

Araneta’s response comes following reports that the international organization allegedly offered the franchise to former Ilocos Sur governor and businessman Luis “Chavit” Singson. Speculation was fueled when Singson and his daughter Richelle, who was a judge at the pageant, came to Manila with Miss Universe 2018 Catriona Gray in December 2018.

Singson, in an interview, confirmed that he was offered the franchise, but said he was thinking about it since it might involve more hardwork. Singson has been supporting the Miss Universe Organization since he brought the pageant back to Manila in 2017 for the 2016 pageant.