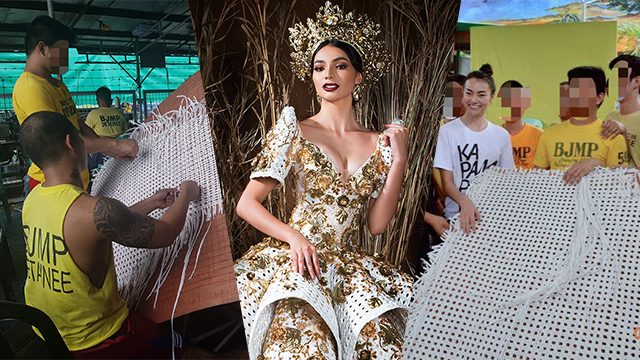 MANILA, Philippines – The national costumes photos of the Binibining Pilipinas 2019 candidates were unveiled last week, and as expected, it made a big impact among pageant fans.

While each costume had a story to tell, Pampanga’s Emma Tiglao had something extra – it was made with the help of inmates at the Angeles City Jail. Photos released by the BJMP Angeles District Jail show Emma and fashion deisgner Richie Sabinian’s visit to the inmates who worked on the costume called “Fe Esperanza Caridad” or Faith, Hope, and Charity. One of the fabrics used by Richie was hand woven by the inmates. In an interview with Rappler on the sidelines the Bb Pilipinas media day on Thursday, May 9, Emma spoke about the work that went behind her costume.

“Actually I want in this Binibini journey to be full of Kapampangan people. And I chose Tito Richie Sabinian to make my national costume, and he said let’s bring in the inmates. We call them PDL– persons deprived of liberty. Because if we call them prisoners or inmates, it sounds something else. They’re also humans,” Emma said in a mix of English and Filipino.

“So we we went there and we saw how they weave the fabric cause some of them are basket weavers. They just use fabric instead to make the national costume.” Emma and the other candidates cotumes will be showcased during a fashion show on May 29 at the New Frontier Theater at the Araneta Center. – Rappler.com