Aug 14, 2013 10:51 PM PHT
Agence France-Presse
Facebook Twitter Copy URL
Copied
It will be offered as a free download to those already using Windows 8; a full retail version of Windows 8.1 will also be available 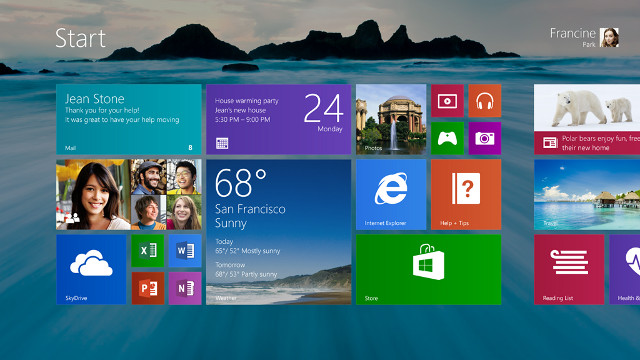 SAN FRANCISCO, USA – A tweaked version of Microsoft’s Windows operating system which restores the “Start” button missed by users and updates other features will be available on October 18, the company said Wednesday.

Windows 8.1 will be offered as a free download to those already using Windows 8, and comes in response to a lukewarm reception to the operating system introduced last year aimed at serving both mobile devices and PCs.

A full retail version of Windows 8.1 will also be available on the same date.

“I know a lot of folks are eager to find out when they will be able to get Windows 8.1,” said a blog posting from Microsoft’s Brandon LeBlanc.

LeBlanc said it would roll out worldwide starting in New Zealand just after midnight.

“Windows 8.1 brings many improvements in areas like personalization, Internet Explorer 11, search which is powered by Bing, built-in apps including a few new ones, an improved Windows Store experience, and cloud connectivity with SkyDrive (and much more) that people will enjoy,” LeBlack said.

A public preview of Windows 8.1 was made available June 26.

At the time, Microsoft said it had sold more than 100 million licenses for Windows 8 but that the update was planned after listening to customers.

Some analysts say Microsoft was forced to act because of slow adoption of Windows 8, which made some radical changes to the design of the desktop.

With Windows 8, Microsoft was trying to create a system that could be used on mobile touch screen devices while also serving the users of traditional PCs.

Microsoft launched Windows 8 last October, revamping its flagship system in an effort to make inroads in the fast-growing mobile segment. At the same time, it launched its Surface tablet computer. – Rappler.com