MANILA, Philippines – Pageant followers are going berserk over this year’s edition of Miss World Philippines with its perfect recipe for a thrilling competition: one favored candidate with 4 possible challengers right behind her tail, all hungry for the crown.

[Think of a boxing bout with the champion in the center, and a challenger in every corner of the ring!] After two years of rumors that the actress will be competing in a major beauty pageant, the Fil-Am bombshell is finally in the battle. She was supposed to be an official candidate in Bb Pilipinas 2013 but was rejected due to a sexy photo spread. Not to be deterred, Megan tried out months later for Miss World Philippines and was welcomed with open arms.

Why should Megan win? She is pageant-ready. You see, the winner of MWP will only have about two weeks or so to train for the big event: the Miss World 2013 pageant in Indonesia. She will have to contend with 133 other nations for the international crown so the Philippines needs a pageant-ready winner.

Megan’s got the package. From body to brains, she is all beautiful.

The downside to a Megan victory

Perhaps we are so starstruck with Megan’s beauty, her being a famous celebrity in the Philippines. But in the eyes of international judges in Indonesia, she won’t have that edge. She’ll be just as unknown as the next contestant. Will she really stand out?

To ensure that we’re not blinded by her fame, we should have a sharp panel of judges, mostly foreign dignitaries, who won’t know her from Adam.

With or without that extra gloss of fame, Megan Lynn Young can’t afford to sit pretty counting daisies. She has got several challengers who can overtake her in a flash. When Julia Morley, wife of the founder of the Miss World beauty pageant, visited the Philippines earlier this 2013, she said that she wanted girls from the poorest regions of the Philippines to have equal opportunity in MWP (Miss World Philippines). She was hoping to see a girl with a Cinderella story, and Janicel Lubina fit that picture to a tee.

Janicel grew up impoverished in Puerto Princesa City, Palawan. Her mom, a kasambahay [house helper] and her dad, a gasoline boy, could never afford much; only food on the table for her and her siblings.

Janicel’s tall frame and tanned skin earned her the nickname “tikbalang” among her friends and classmates.

But poverty and hurtful names could not stop Janicel from achieving her dreams. The “tikbalang” became a teen queen when she won Mutya ng Palawan in 2012. She has collected two more titles since then: Miss Scuba Philippines 2012 and Slimmer’s World Miss Bikini Philippines 2013.

Janicel’s biggest challenge will be interviews with the judges and the Question and Answer portion. While she is a fast learner and is excellent at memorizing answers, we need a Miss World Philippines who can think on her toes and communicate her message as naturally as possible. Maria Paula Bianca Paz is a repeater in Miss World Philippines, but she’s not just any repeater. She also happens to be the 3rd Princess (3rd runner-up) in MWP 2011. As a result, she has got solid relationships with all the top honchos in the MWP organization and the former queens.

When Paula walked into the screening room, it felt more like a reunion than a scrutiny; everyone was gushing over her “new and improved” figure, asking what her diet and exercise regimen were. At the end of her screening, she declared, “I’m back to win that crown!”

At age 24, this could very well be her final bid for a national crown. Her first attempt was in 2009 when she joined Bb Pilipinas. She left the stage unplaced. In 2010, she was sent to China to represent the Philippines in the Asian Supermodel search where she garnered the Miss Photogenic special award.

In 2011, she tried Bb Pilipinas one more time, but the organization took her off its list of official candidates without saying why but it is generally believed that Bianca was removed due to a sexy calendar spread. That same year, Bianca was vindicated after joining MWP and placing 3rd Princess.

Today, she’s back for that elusive MWP crown, but does she deserve it? If she does win, Bianca Paz would be a great representative and needs little or no training at all. From the talk to the walk, this shapely babe should be able to shine in Indonesia. Out of all the challengers (and contestants), Patricia Lae Ejercitado is the most doll-like. She is so near-perfect that you will want to tear off her arm or leg just to see if she’s real. But she is real enough and has been doing the pageant circuit for a few years now.

In 2009, Patricia participated in Century Tuna’s Superbods contest and was the People’s Choice winner. In 2010, she made an attempt for a Bb Pilipinas title but walked off stage unplaced. Her second try in the same pageant in 2012 was more successful; she landed in the Top 12 circle. Today, she’s gunning for the Miss World Philippines crown, but would she be the right choice?

That would be a big yes.

After all her pageant experience, this licensed interior designer is ready to compete abroad. She is stunning on stage and gorgeous up close. Aside from her doll-like qualities, her next best asset would be her beautiful mahogany skin, the one thing that marks her as truly Pinay.

Patricia also has that competitive South American vibe that would leave her competitors quaking in their heels. And, based on the few Question and Answer video of Patricia online, we can trust her to do well enough in interviews. The only thing she would need to improve on is to sound more natural when speaking. Out of all the pageant newbies in MWP 2013, Zahra Saldua is, by far, the strongest one.

Fresh with a very pretty face, Zahra’s one big edge is her upbringing as a Muslim. During her audition for MWP, she entered the screening room in her bikini covered with a sarong. We asked her to remove it but she declined, saying that she was Muslim and was uncomfortable with exposing so much skin.

Then Zahra explained that she had no plans of joining pageants until she heard that the winner of Miss World Philippines wouldn’t have to wear a bikini when she competes in Miss World 2013 in Indonesia. The pageant removed the bikini contest due to that nation’s conservative Muslim beliefs.

This will be the first time that Miss World will not have a swimsuit competition. Instead, they will have a Balinese Beach Fabric contest.

Being Muslim, Zahra knows the culture well and should be able to impress Indonesian organizers and judges. If that doesn’t work, she has her sharp communication skills to depend on, being a PTV4 news anchor, a radio jock, courtside reporter, event host and singer.

One more asset? She fits the Miss World theme of “Beauty with a Purpose.” Visit her Facebook and you will see it dotted with posts asking people to help out the foundation she is affiliated with: the Muslim Sisters Bridging Society. The group is involved in feeding programs for poor children, fund raising for indigent patients in need of surgery and blood donation drives. Zahra herself has donated blood on occasion.

The only downside to a Zahra Saldua election is her inexperience in modeling. Gone are the days when beauty and brains were enough to win a crown. You need a catwalk that leaves skid marks on the ramp and posing skills that can burn the lenses off a camera.

The winner of this pageant will only have two weeks to train for Indonesia. So the question is, can Zahra wing it in such a short time?

Other contestants to watch!

There are several girls in MWP 2013 who may pull a fast one on coronation night. Let’s go through the possibilities. KC had one of the most elegant walks in Bb Pilipinas 2013 where she was a replacement candidate for a disqualified contestant. In MWP she still is the best when it comes to walking like a queen. Her past achievements include being a runner-up in Supermodel of the World Philippines 2009 and a candidate in Bb Pilipinas 2013. This General Santos City native has been modeling since age 13. This pretty Registered Nurse from Las Pinas was a candidate in the Miss Philippines Earth 2013 beauty pageant but she was unplaced. She has improved since that pageant with a glossier look and sleeker walk. The current Mutya ng Palawan title holder is a dead ringer for comedienne Giselle Sanchez. She gets her fine form and graceful moves from being a gymnast and dancer for a folkloric troupe. This fashion model and UP Los Banos Math wizard has joined a couple of pageants: the Miss Casino Filipino 2012 and Bb Pilipinas 2013. She was unplaced in both but gained a strong following among pageant fans for her dusky look. She has a blog that you can check out: merceraquel.tumblr.com. Paula is the skyscraper in the MWP 2013 batch. At the screening, she said she was 6 feet flat but some websites say she is 5’11″. It doesn’t matter: either height is still way up there! Paula saw action in Miss Bikini Philippines 2013 (representing Caloocan) and Body Shots 2013. This HRM graduate from Sta Rosa, Laguna entered the Mutya ng Pilipinas 2013 where she won Best in Swimsuit and placed in the Top 10. Keep an eye on this consistent winner: her titles include Rosas ng Sta Rosa 2012, Miss Casion Filipino Heritage 2012 and Bb Laguna 2013. This business graduate from Columban College is the reigning Bb Olongapo and one of the prettiest faces in MWP 2013. She is fresh out of her braces and had her cute corkscrew locks straightened for a more competitive look. This Ilocana rose is a stand out on stage with her tiny waistline and subtle curves that will make your eyes pop out. Her list of titles is also eye-catching: Saniata Ty Ilocos World 2013, Miss University of the East 2011, La Bulaquena Miss Earth 2011 and Miss Lions Clubs Visayas 2012. Ria Rabajante has the hottest catwalk in MWP 2013! Even in Bb Pilipinas 2013, she sizzled on stage but unfortunately did not place. Many say that this Pasiguena from Albay, Bicol has a strong Miriam Quiambao vibe. Visit her blog at riarabajante.tumblr.com. Zandra is fresh from a good showing at the Mutya ng Pilipinas 2013 where she entered the Top 10 and won two key awards: Press Favorite and Miss Photogenic. She also did battle in Bb Pilipinas Gold 2013 but unfortunately did not win. One of Zandra’s most interesting achievements is being the model on one of the book covers of teen fiction author Alison Goodman where she portrayed a teenage Samurai warrior. 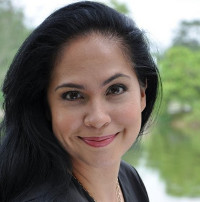