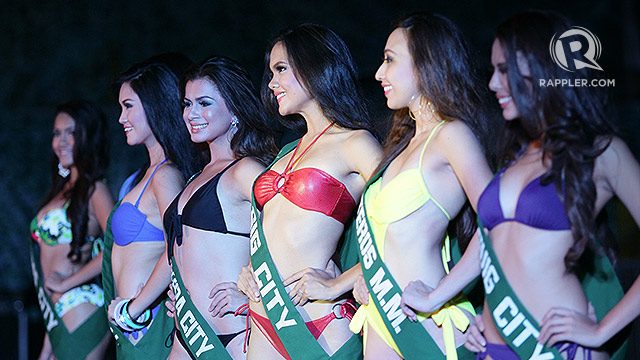 MANILA, Philippines – It was Cebuana beauty Jamie Herrell’s night as she was named Best in Swimsuit during the Ms Philippines Earth 2014 Swimsuit Competition, held poolside at Solaire Casino and Resort Wednesday, April 30.

See photos of each candidate here:

Special Awards were also given to the following:

Each of the 47 girls took turns posing in front of the judges, led by Ms Earth 2008 Karla Henry and Ms. Earth –Air 2012 Stephany Stefanowitz, who gave their comments with regard to the walk, stage presence, swimwear of choice, and overall presence of each candidate. The event was hosted by reigning Ms Philippines Earth 2013 Angelee delos Reyes.

Two candidates, Kidapawan’s Trixie Aira Hipolito and San Leonardo Nueva Ecija’s Leslie Ann Pine, missed part of the event after becoming indisposed during the competition. Both ladies were immediately attended to by medics on standby.

Another two candidates, Tungawan, Zamboanga Sibugay’s Cesdianne Daung, and Caloocan City’s Amanda Arbitrario, were not present at the event.

The Ms Philippines Earth 2014 coronation night is set to be held on May 11 at the Mall of Asia Arena. – Rappler.com