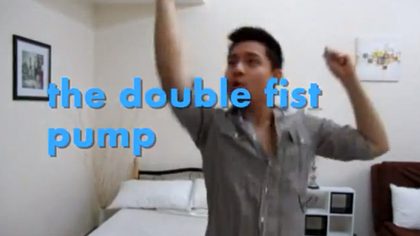 MANILA, Philippines – Ever found yourself at a loss of how to carry yourself while in the middle of a club? Don’t fret! Let this guy show you how.

In two short minutes, YouTube user “jemdahunk” shows you the essentials in club dancing — from “the two fingers,” “the fist pump,” to “the socialite.”

The video was uploaded on May 21; currently the video has over 119,00 views, and its hits are rising.

It is funny, succinct, and also very true. Watch it below.

Our personal favorites include the “the drunk” (complete with a bottle of spicy vinegar!), “the manyak” (hey club pervs, we’re looking at you!), “the feeling close,” and “the space hugger” (please take note: personal space is still important in a packed club).

In an interview with Rappler, Jem said he made the video because he was missing the Philippines. He is currently working in the United Arab Emirates. “I had to have an outlet,” he said.

How’s he handling his viral fame? “I don’t consider it fame. It’s a phase; the video was in the right place at the right time,” he said, well aware that viral sensations easily come and go.

“The next day, there will be another YouTube sensations. I’m just happy that I made people laugh,” he told Rappler.

Two days after the first video was posted, Jan came up with with a “sequel.” Watch it here:

Another “How To Dance In A Club” video also went viral recently–YouTube user “ashleyslips” went viral after she uploaded a video of her alter-ego Petro Mahalimuyak doing a step-by-step guide to dancing in a club. -Rappler.com