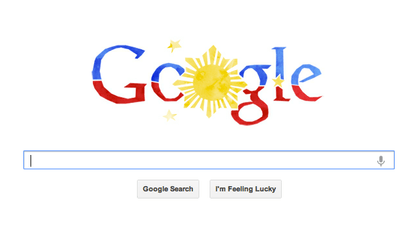 On Tuesday, June 12, Google’s logo on its global and Philippine homepages (www.google.com and www.google.com.ph, respectively) was changed to commemorate the Philippines’ 114th independence day.

Instead of the usual blue, red, yellow and green of the individual letters forming the company’s logo, Google adapted the Philippine flag’s blue and red, and changed one of the Os into the sun from the flag.

The 3 stars representing Luzon, Visayas, and Mindanao are also present, surrounding the sun in its usual triangular formation.

Clicking on the logo will bring the visitor to a search results page on the query “Philippine Independence Day.” The design joins the more than 1,000 doodles the company has placed on its site, commemorating important milestones in history — from natural phenomena to local holidays and birthdays of historical figures.

The doodles are made by a team of illustrators, aptly called “doodlers” by Google, and they have produced a wide range of doodles, from simple images to ones that can record tunes.

“Doodles are the fun, surprising and sometimes spontaneous changes that are made to the Google logo to celebrate holidays, anniversaries and the lives of famous artists, pioneers and scientists,” the company said.

It originated in 1998, when founders Larry Page and Sergey Brin played with the Google logo to indicate their attendance at the Burning Man festival in Nevada. The practice was formally instituted in 2000, with a doodle marking France’s Bastille Day.

Google has celebrated Philippine Independence Day via Google doodles twice before in 2009 and 2010.