My thoughts on the Bb Pilipinas 2015 queens Note: The essay below was first posted in Norman Tinio’s blog. It is republished here with his permission.

As we begin a new chapter in the country’s annual beauty contest season, let us all welcome the 5 ladies who will symbolize the modern Filipina on the international pageant stage – hopefully with wide open arms as they will train like no other in hopes of achieving more victories abroad. (READ: The ultimate Bb Pilipinas 2015 face-off: My predictions for the big win)

There is Miss Universe Philippines 2015 Pia Alonzo Wurtzbach, who will take part in the next Miss Universe edition to be hosted in a still-unannounced city. (FULL LIST: Winners, Bb Pilipinas 2015 coronation night)

Get to know each one of them a little more in the following dedicated pieces, an introduction to the Bb. Pilipinas 2015 winners, if you will. March 15, 2015 was Pia Alonzo Wurtzbach’s day of deliverance from two years of longing (dreaming, if you will) for a Bb Pilipinas crown. (WATCH: The moment Pia Wurtzbach wins Miss Universe PH crown)

In 2013 during the Gold edition, she was close but not quite as the sole runner-up of the batch. She patiently went with the flow of joining the titleholders even without competing internationally. (IN PHOTOS: Pia Wurtzbach’s 3-year Bb Pilipinas journey)

But last year, she wasn’t fortunate enough to land a place in the Top 5, not even the Top 7. And that slump should’ve been more than enough to discourage a Binibini of lesser stuff. But not for the type of determined lady who, after taking stock of her remaining options, went for the 3rd leap of faith in this year’s nationals.

The Cagayan de Oro City rep’s win last Sunday night was, to put things in a serendipitous state, written in the stars. And I’m sure that statement won’t sit well with some pageant fans who think otherwise. That’s how a fatalist like myself would think, though. Had the results for Miss Universe Philippines 2015 favored someone else again, I can still take things squarely. Just as Pia would not lose her mind, if ever. (READ: Pia Wurtzbach on victory: I’m not going to waste it)

Pia is still on Cloud 9 right now. And she just might stay that way for some time. Let’s hand it to her. The minute training starts, she will have her heart, body, mind and soul #ForThePhilippines. And that is a promise she intends to keep. 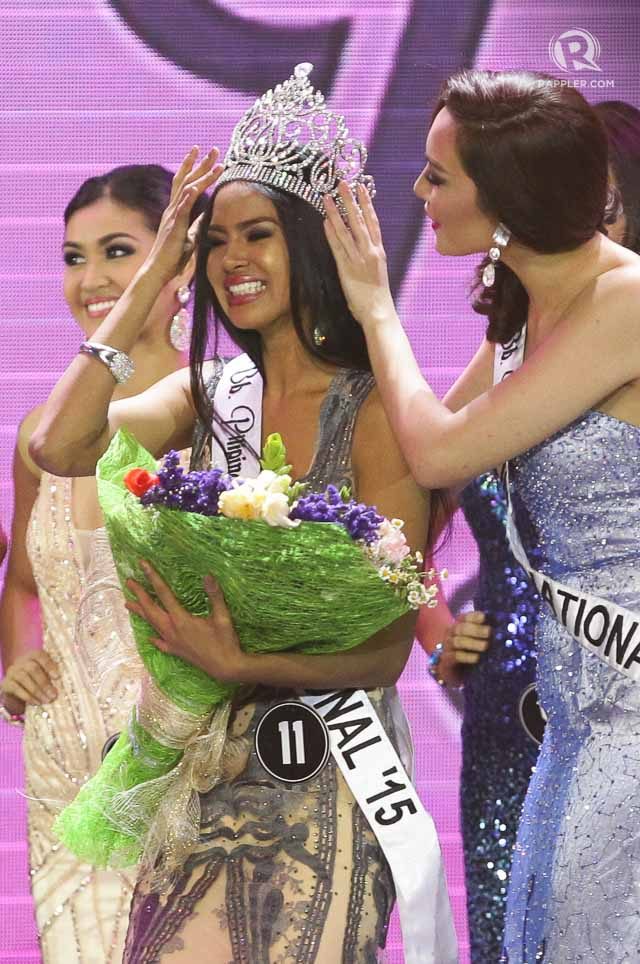 Newly crowned Bb. Pilipinas International 2015 Janicel Lubina may not have gotten the crown she was initially aiming for, but for all it’s worth, she still left Araneta Coliseum a happy young Binibini. After all, only 5) of the 34 candidates were honored with glittering victories. And taking home the 2nd highest title shouldn’t be taken lightly.

Truth of the matter is that, whatever transpired during the judges’ deliberations is now moot and academic. The decision can no longer be undone. One doesn’t pray for time to go back and redo all the steps that could’ve made that small difference to effect the preferred change. Instead, destiny should be accepted as is.

The best thing to do at this point is look forward to the higher level of training in store for her. There is a burden of responsibility on Janicel’s shoulders from now on. And it is something that goes beyond camp affiliations. The reign is already for flag and country.

The sooner the results settle in, the better. And we trust that all the 2015 Queens will take their brand-new ‘job’ with unbridled enthusiasm and unstinting commitment. For starters, she won the crown that automatically gave her the right to represent the Philippines in Miss Intercontinental 2015, the same competition she participated in (and where she made Top 10) back in 2010 as a Mutya ng Pilipinas titleholder. What could make the scenario extra interesting, in an iffy kind of way, is if the organizers of the Europe-hosted pageant will approve her candidacy which should make her the only country delegate ever who will take part in the same tilt in two separate years. Sounds weird and useless, if you ask me. And my hunch is not about to lean towards the above. So what could be the options for the beautiful 25 year-old Fil-American?

As what fellow pageant blogger Joyce Ann Burton-Titular stated in her site, it will all be sorted out by BPCI sooner or later.

Let’s just wait and see what will happen next. This is the second consecutive year that KF Cebu snatched a Bb. Pilipinas crown after Kris Tiffany Janson, and the group is on a roll, so to speak.

While Bb. Pilipinas Supranational 2015 Rogelie Catacutan was given positive feedback and early on in the competition, she was not as popularly singled out as the other Binibinis. But then again, she pleasantly managed to pull through during the finals night and is now in line for a shot at more pageant glory with her future participation as Miss Philippines in Miss Supranational 2015.

Rogelie will have to take an extended leave of absence from her work in a 5-star hotel. And if she is extra fortunate in her mission abroad, then she just might re-channel her career and go for more rewarding opportunities coming her way.

So are you happy with Rogelie’s win? She is such a sweet and charming 23 year-old who deserves the recognition.

And Cebu will definitely welcome her back with much fanfare. “Star light, star bright,
The first star I see tonight;
I wish I may, I wish I might,
Have the wish I wish tonight.”

Bb. Pilipinas Tourism 2015 Ann Lorraine Colis must have been chanting the nursery rhyme above from the time she won a national crown two nights ago. And by the way BPCI has not been serving its holder an assignment to any overseas pageant mission, our lovely Kapampangan beauty queen might need to exert more wishful thinking to make the reign extra meaningful compared to her predecessor, Parul Shah.

Truth be told, Ann could have easily gotten a better title. She continuously oozes with unmistakable appeal that can be greatly appreciated in an international beauty competition. But with what she ended up with, all we can hope for is that one of those Tourism contests make serious negotiations with Bb. Pilipinas to allow this lass to spread her magnetic charm and perhaps give the country one more deserving representative to cheer for.

At the rate the Facebook page of Miss Tourism Queen International has been miserably inactive except for a sad-looking Lunar New Year post last month, there’s really no use expecting any signs of life in that organization anymore. – Rappler.com