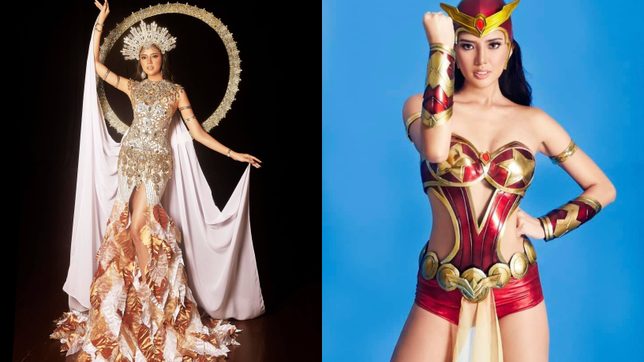 STUNNING. Cinderella Obeñita captivates netizens with her halloween and national costume for the Miss Intercontinental pageant.

In photos shared by Binibining Pilipinas on Friday, October 22, Cindy wowed in a white-and-gold embellished gown made by Filipino designer Odelon Simpao.

“Filipinos have long been in love with the enchantments of ‘diwata,’ a mythical goddess whose omnipotence can be likened to Egyptian deities,” they wrote about the inspiration behind the ensemble.

The organization added that the gold element in Cindy’s national costume pays homage to the Philippines, especially Cindy’s hometown in Mindanao, being a gold-producing area.

On Saturday, October 23, Cindy once again wowed pageant fans with her Darna get-up for the pageant’s Halloween party. “Ding, ang bato (the rock)! This is me channeling my inner Darna,” she captioned the post, alongside photos of her with fellow contestants from the party.

She explained that the fictional hero has inspired the dreamer in her, which is why she decided to wear the iconic superheroine’s costume. “In today’s times, I encourage girls, young and old, to be like Darna in their own ways. Stand up for something worth fighting for and zoom into the skies with limitless boldness of spirit,” she continued.

Cindy has highlighted the strength of women in previous instances. During the Binibining Pilipinas coronation night in July 2021, Cindy trended on social media following her answer in the question and answer round – where she said wanted to be a woman who “comforts the afflicted and afflicts the comfortable.”

Fellow beauty queens such as Katarina Rodriguez, Maureen Montagne, and Maureen Wroblewitz have praised Cindy’s costumes in the comments section.

Cindy is currently in Egypt for the Miss Intercontinental pageant, whose coronation night is set on October 29 (October 30 in the Philippines).

She is vying for the country’s second Miss Intercontinental crown after Karen Gallman in 2018. – Rappler.com