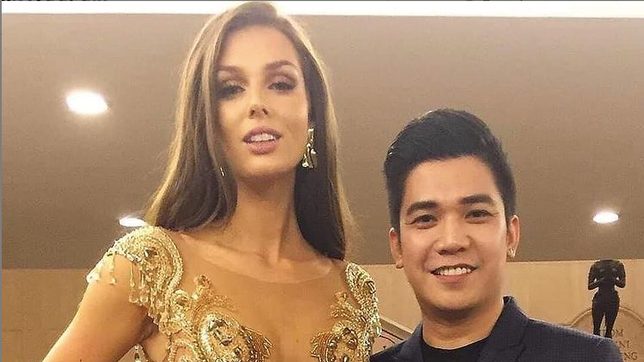 Fashion designer Rian Fernandez on Sunday, May 23, opened up about the “dreadful” and “awful” way he was treated by organizers of Miss Universe Canada.

Fernandez, who has designed gowns for both Filipino and foreign beauty queens, said that he wasn’t posting to “ride” on the controversy triggered by Cinco’s post. Instead, Fernandez said Cinco’s speaking out helped him find the courage to break his silence.

“Unfortunately, I did not have the courage to speak before because I am just a small brand. I was scared that it will boomerang on me. Now that I know that I was not the only one treated badly by Denis, but other Filipino designers as well…I cannot be silent anymore,” he said.

Fernandez recalled several instances where he had either been allegedly lied to or deceived by Davila and the organization.

In the 2016 edition of the pageant, Fernandez had wanted Canada representative Siera Bearchell to wear a brown, high-slit gown to the finals.

Instead, Bearchell wore a white serpentine gown also by Fernandez, allegedly because the beauty queen picked it over the brown gown. Fernandez said he later found out that Bearchell didn’t even see the brown gown.

The designer, in an interview with Bearchell for her YouTube channel, said he regrets not having the chance to collaborate with Bearchell much earlier so he could design a gown to better suit her figure. The two went on to keep a close relationship, and Fernandez even designed Bearchell’s wedding gown.

He also said that in 2018, he designed five gowns for Marta Stepien, who represented Canada in the Miss Universe pageant. Fernandez said Davila assured him Stepien would wear his creations during the pageant. She didn’t, however, and the Canadian rep wore Cinco creations both in the prelims and the finals.

Fernandez said that he asked for all five gowns back, so that he could offer them to other contestants to wear. Davila allegedly only returned one, which Miss Cambodia eventually wore.

The stressful situation, said Fernandez, pushed him to the edge.

“I was devastated and cried in my hotel room!!! I felt frustrated, cheated…and I questioned my talent and skill as a designer! Until the stress and anxiety level escalated and I felt half of my body paralyzed. It was the scariest moment of my life. Luckily, there was this supporter of Catriona, a licensed physical therapist in Dubai, who helped me. If not, I might not have seen the light of day,” he said.

Bearchell, who earlier said she would not comment on Cinco’s post against Davila, made a post in support of Fernandez. She also noted that “for years, people didn’t believe my story,” referring to the behind-the-scenes drama when she competed for Miss Universe. “Maybe now, it is making sense,” she said.

For most designers, dressing beauty queens can be costly – most of the time, gowns are created for free. Sometimes, it’s the designer who spends on the gown itself and expenses related to the pageant.

Fernandez earlier opened up, if only a little bit, about the experience in his 2020 interview with Bearchell.

Cinco himself said he shouldered several expenses, including commissioning a photo shoot in Dubai where Stevens wore his couture creations.

In Fernandez’s case, he said he shouldered the expenses for the gowns and for his and his team’s trips to and from Thailand, to help with Stepien’s fittings and the pageant proper.

“I know that I shouldn’t be counting the cost of that dreadful experience (both financially, mentally, and psychologically) because I wanted to be part of Marta’s Miss Universe journey. To sir Michael Cinco’s point, a simple thank you would do! But those two simple words that could have eased my anxiety was not even uttered by Denis Martin Davila, Marta Magdalena Stepien, and Miss Universe Canada Organization,” he said.

He ended the post by saying he has spoken to Cinco about their experiences. He also hopes what they went through would be a warning to other Filipino designers.

As of posting, neither the Miss Universe Canada Organization nor Davila has issued a public statement. – Rappler.com