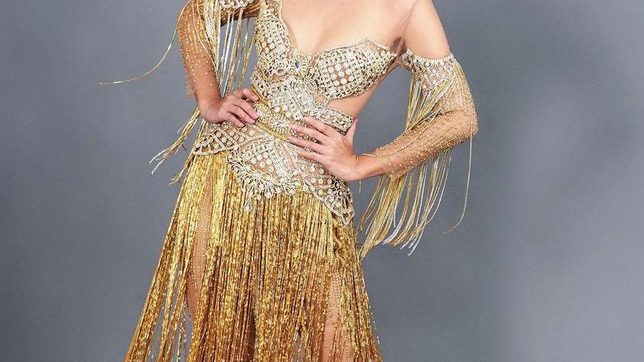 Tracy Maureen Perez took home the title of Miss World Philippines 2021 during the pageant’s coronation night, which began on Sunday evening, October 3 and ended up running until the early hours of Monday, October 4.

Aside from besting 44 other candidates for the Miss World Philippines crown, Tracy bagged five other special awards throughout the competition.

Ready for the crown For the past two years, Tracy has also tried her luck in the national pageant scene. She first joined Miss World Philippines in 2019, where she finished in the Top 12. Michelle Dee, who won the title at that time, is coincidentally the one who passed the crown to Tracy.

Tracy also competed in the Miss Universe Philippines 2020 pageant. She won Best in Swimsuit, Miss Photogenic, and finished in the Top 16. Rabiya Mateo was hailed the winner.

While she just fell a little short in her previous national pageant stints, Tracy was determined that she would take home the crown in her second bid for the Miss World Philippines title.

During the initial screening for the 2021 Miss World Philippines candidates, Tracy said that she’s “100% confident” that she will win one of the titles. “If there’s one thing I’ve learned from the past pageants I’ve joined is that my biggest competition is myself because I usually doubt myself along the process,” she said.

Revealing that it’s her last time joining a pageant, Tracy said that she prepared a lot for this competition. “I’m super excited about what’s to come. I don’t wanna close this chapter yet without closing it with a bang. And I can do it this time. I know that in myself that I’ve trained hard for this and worked hard for this.”

In an Instagram post, Tracy wrote that she won’t stop reaching for her dreams of representing the Philippines in the international stage. “I know this time, I am ready,” she said.

For the question and answer portion, Tracy was asked by actress Elisse Joson. “After we go through this pandemic, what would you want us to learn from it?”

Tracy’s winning reply was, “After this pandemic, I hope that we never take for granted the family we have, taking care of our health, and taking care of the people that protect us – our leaders, our frontliners. We should always give importance to those people. We may not see the efforts that they give out, but most definitely they are our modern heroes, and for that we should always be grateful. We should always stick with them and pray for them.”

Prior to her answer in the Q&A segment, Tracy has talked about being grateful several times. In one of the Head to Head challenges, Tracy shared that being a miracle baby, she learned how to consider life as an absolute blessing.

“Coming from a simple family and [to] be born as a miracle baby, I always taught myself to be grateful for every single beginning and every single day that I live my life and I hope that it becomes as an inspiration to others to see the little miracles in their daily lives and to be grateful and thankful to the people around them,” she said.

She added, “I’ve learned to aspire for one thing – and that’s to be happy. That translates to me as success…. By that simple definition of success, I know that I can inspire others. I can teach others not to dream about all these superficial things but to dream and aspire about the most important thing in life. And that is to always strive for happiness.”

The model-host, who is also an industrial engineer, admitted that her simple happiness sometimes comes from Fliptop and online games. “I’m a huge fan of Esports. I’m a gamer myself and even considering myself to become a streamer one day,” she said.

Tracy will be representing the country in the international pageant – the 70th edition of Miss World – in Puerto Rico in December. She is vying to become the second Filipina to win the elusive Miss World title following Megan Young.  – Rappler.com