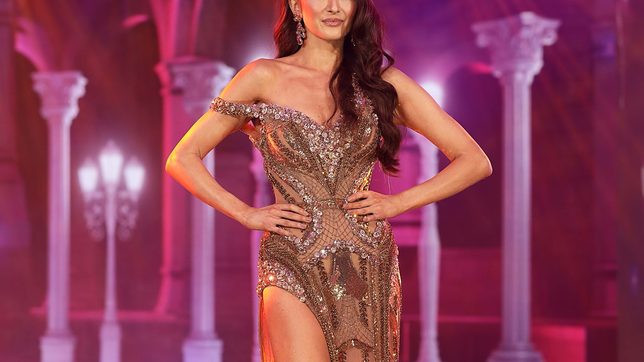 Victoria Velasquez Vincent, a relative unknown in the pageant scene, reached new heights when she was named Miss Universe Philippines Charity 2021 at the pageant’s coronation night on Thursday, September 30.

Despite being new to pageants, Victoria quickly became a fan favorite throughout the competition, winning audiences over with her poise, eloquence, and Irish-Filipina beauty.

Victoria describes herself as a “water and jungle baby,” and her Instagram shows as much, filled with the bright greens and blues of places she’s visited in her travels.

Victoria, 26, was born and raised in New Zealand, the youngest daughter of an Irish father and a Filipino mother from Bacoor, Cavite.

While she is only just learning Tagalog, she visited the Philippines often in her early childhood, saying that those trips made up her most vivid memories from before she was 5 years old.

“It’s as if my heart has always known this is home,” she said in an Instagram post.

One of those trips was apparently more eventful than others – when Victoria was 3 years old, she was kidnapped at a market in Bacoor and was missing for an hour before she was found through the efforts of her aunt and cousins who knew the area.

“That actually contributed a lot to why I’m here and why I wanna do what I wanna do,” Victoria said in an interview with pageant vlogger Tita Lavinia.

What she wants to do, in fact, is to help improve the Philippines through architecture and heritage conservation, which she holds double masters degrees for.

Victoria believes that architecture can be used to improve people’s lives and respond to pressing social issues such as poverty.

In an Instagram post, Victoria has written about how colonization has diluted Filipino’s architectural identity, and how “Western design principles are working against the typical Filipino’s fundamental way of living.”

Filipino architecture was also the subject of her master’s thesis and she spent time in poverty-stricken areas in the Philippines in 2019 to do site research for it.

Two years after that, she returned to the Philippines again, leaving the safety of New Zealand – this time to pursue a pageant title.

While joining pageants had always been on her mind, Victoria’s entry into the pageant scene was a matter of happenstance.

In an interview with YouTuber Luis Portelles, Victoria said she had come across Bella Ysmael, who placed 1st runner-up at the Miss Universe Philippines 2020.

After following Bella on Instagram, she saw that Bella was coached by The Camp and followed them too. To her surprise, they reached out to her and asked her if she was also interested in joining the Miss Universe Philippines.

“I’ve always thought about it but I’ve never really known really how to get into the pageant scene, especially in the Philippines. It’s such a huge thing here, it’s like a national sport, I’d never really know where to begin,” she told Luis.

“I was just really lucky that they were the ones that reached out to me and held out their hand to guide me throughout the journey,” she said.

Even as she dove headlong into a completely different field, Victoria kept her passion for heritage conservation in the foreground, using the pageant as a platform for her to talk about her advocacy and zero in on the goal of bringing low-cost and sustainable housing to Filipinos.

As she prepped for the pageant, she also worked as a technical volunteer for Habitat for Humanity, a nonprofit organization that works toward housing solutions for communities in need.

She soared through each step of the competition, winning the interview challenge and making the Top 15 in the casting video challenge.

On coronation night, she wowed with her walk in the swimsuit and evening gown segments and impressed with her Q&A response about being inspired by the stories of people who’ve been through tougher battles than her.

Not surprisingly, she bagged the top third title but even then, it seems that for Victoria, the pageant meant more than winning a crown.

As she herself put it, the pageant was the second step to her “dream of creating an impact in my beloved Philippines and giving back to my people.”

“I did move to the Philippines from arguably the safest country in the world right now, in the middle of a pandemic, because that’s exactly what I wanna do,” she told Luis.

“I may not be physically a hundred percent Filipino, but the fact that other people are running away from the Philippines but I am running head-on to the Philippines, just trying to contribute to the country, is what I really hope people come to see,” she said.

While she didn’t win the top title, Miss Universe Philippines Charity seems to work well with Victoria’s desire to help solve social issues – whether she’s wearing a crown, a hard hat, or just the smile that has endeared her to the people who’ve followed her throughout her journey thus far. – Rappler.com