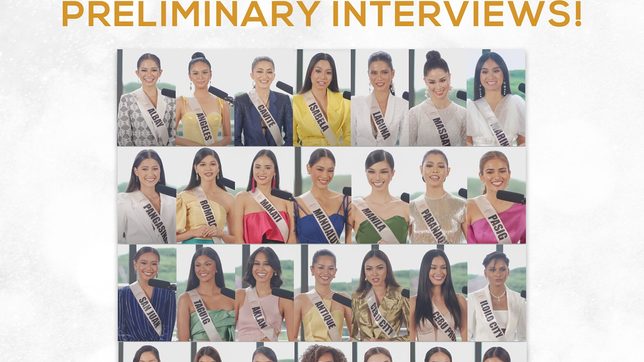 TOP 28. From 100 delegates, only 28 women remain in the Miss Universe Philippines pageant.

From removing the height requirement to starting with 100 delegates, the Miss Universe Philippines 2021 was a year of several firsts for the young pageant.

As the coronation night draws closer, let’s look back at the Miss Universe Philippines 2021 pageant so far:

Unlike last year’s edition, the 2021 pageant began with 100 delegates. These 100 women were selected by the organization’s panel of judges from those who submitted their applications online.

The top 100 then underwent several challenges – all remote – over several weeks. Pageant fans and supporters were given the chance to vote for their favorite delegates via the Miss Universe Philippines app. Delegates were determined based on both fan votes and the decision of the organization.

The first challenge was the headshot challenge, which ran from July 26 to August 1. Masbate’s Kirsten Delavin earned the highest votes for this challenge, with San Juan’s Rousanne Bernos and Pangasinan’s Maureen Wroblewitz following behind.

After two challenges, the 100 hopefuls were whittled down to a top 75.

According to the organization, the women in the top 75 were determined by both “cumulative votes” from the first two challenges and votes from the Miss Universe Philippines organization.

The top 75 then showcased their pageant walks in the runway challenge. The organization announced on the top 15 on August 15, with Cebu’s Steffi Rose Aberasturi topping the challenge. Wroblewitz and Delavin placed second and third, respectively.

The fourth challenge was the casting video challenge where delegates wore plain white shirts and minimal make-up to highlight their natural features from all angles.

Wroblewitz, who won Asia’s Next Top Model in 2017, garnered the highest number of votes for this challenge. Laguna’s Leren Mae Bautista and Aberasturi had the second and third highest votes.

The top 50 then underwent the virtual interview challenge, where all ladies spoke to judges from the Miss Universe Philippines organization. Each delegate had 45 seconds to introduce themselves, and 30 seconds to answer a question. There was a total of three questions each.

The virtual interview challenge was streamed on Empire Philippines’ YouTube channel on August 28.

Compared to the previous challenges where the top 15 was based on fan votes, the virtual interview challenge top 7 were chosen by panelists.

The winners for each challenges are as follows:

After two months and five virtual challenges, the organization announced on September 1 its top 30.

Twenty-seven of the top 30 were chosen by panelists while three delegates who garnered the highest number of fan votes from August 22 to August 31 on the MUP app were automatic inclusions to the list of finalists.

According to the organization, scores all went back to zero in the lead-up to the preliminaries and the coronation night.

The top 30 then travelled to Clark, Pampanga for their lock-in bubble as pre-pageant activities begin. On September 13, the top 30 took to their social media to share photos of them wearing their official Miss Universe Philippines sashes.

Only 28 candidates remained in the competition after two women withdrew from the pageant – Joanna Maria Rabe of Zambales was diagnosed with dengue and Ybonne Ortega of Davao tested positive for COVID-19.

Given the surge in COVID-19 cases and changes in quarantine restrictions, the Miss Universe Philippines pageant also had its setbacks. The coronation night was originally scheduled for September 25, but was postponed. The airing of other pre-pageant activities were also rescheduled to a different date.

Despite these, the pageant forged on. On September 23, the organization debuted the candidates’ national costumes. On September 24, preliminary interviews were aired via KTX.

On September 26, the preliminary swimsuit and evening gown competitions were aired.

For the swimsuit competition, the candidates sashayed in their red swimsuits at the Clark International Airport. At the same venue, candidates showcased their evening gowns.

The organization announced that the coronation night would be held on September 30 in Panglao, Bohol.

Reigning queen Rabiya Mateo is set to crown her successor. The winner will represent the Philippines in the Miss Universe 2021 pageant, which will be held in Israel in December.  – Rappler.com