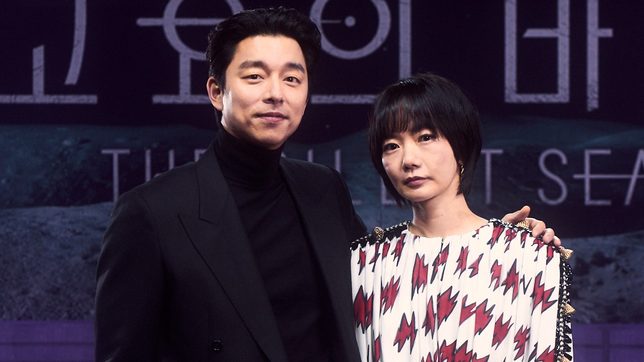 MANILA, Philippines – Netflix’s new The Silent Sea sci-fi series, which debuts on December 24, is of a genre not commonly seen in the K-drama world.

Set on the moon in 2075 while Earth is undergoing desertification, the series is about members of a special astronaut team tasked to secure and retrieve mysterious samples from an abandoned research facility on the moon. It’s an “out of this world” concept that delivers thrill, suspense, and awe, and is exactly why popular Korean stars and lead characters Bae Doona and Gong-yoo immediately jumped at the chance to star in Choi Hang-yong’s dark and dire series.

The Silent Sea features a star-studded cast comprising of Gong Yoo (Train to Busan, Goblin) starring as Han Yoon-jae, the exploration team leader who was tasked to carry the crucial and risky mission despite the limited information; Bae (Kingdom, Sense8),the astrobiologist Doctor Song Ji-an who aims to uncover the truth behind the abandonment of the space station, and Lee (Gapdong, My Father is Strange) as Captain Ryu Tae-sook, the head engineer who volunteered for the mission to escape the ministry’s stifling environment. The eight-episode series also stars Kim Sun-young, Lee Mu-saeng, and Lee Sung-wook. It is directed by Choi Hang-yong and written by Park Eun-kyo.

In a Netflix South Korea press conference on Tuesday, December 22, The Silent Sea cast gathered to discuss the challenging but fulfilling experience of filming the series, which was actually based on director Choi’s thesis graduation work – a short film he produced himself. For Bae, this is what urged her to take on the challenge.

Sold on the script

“When I first read the script, because sci-fi and outer-space series is not that common in Korea, and I thought it was a big challenge. Prior to having seen this script, I would have thought this was a challenge, but I did watch the short film which The Silent Sea is based on, and after watching the short film, I thought that making a sci-fi for your thesis, for your graduation work, that wouldn’t be really easy because you don’t have that much input, you don’t have that much investment and money, you have this limited budget, and you’re using this limited budget to come up with this short film,” she said.

Bae said she thought Choi’s short film “was amazingly done.” The emotional development of the cast was perfectly drawn on the screen, and she was very surprised at the “perfection” of the short film.

“I thought a space sci-fi created in Korea would be worth a challenge as an actor. That’s what I thought. So I wanted to take part. So I really enjoyed that short film, I was very amazed by the quality of it. The atmosphere of the short film, and the emotions of the cast were perfect, and it was something that we could believe. So that’s why I decided to take part,” she said.

Gong-yoo, who is known for his many romantic K-dramas and 2016’s zombie hit thriller Train to Busan, said he wanted to do a “genre drama” this time around – and knowing the “director’s brilliant imagination, perfect setup, and themes”, he knew it was the genre drama that he wanted. He liked it in all aspects, he said, and there was no reason for him to say no.

“It was perfect timing because that’s when I was offered the series, and when I read the script, I shouted out, “Eureka!” It felt like there’s ten exclamation marks popping in my head. There’s different elements to the script, and I could imagine how this would turn out. And when I can imagine just by the script, I always said yes to that script,” he said.

Aside from the script selling itself, the two celebrities said that it was also their admiration for veteran actor and The Silent Sea executive producer Woo-sung that inspired them to take on the part. With his work ethic and positive attitude, it wasn’t hard to feel comfortable on set.

“I have never seen someone so diligent. He would be on set every single day, on every single shoot, and he would take care of every minor detail. I’ve never seen an executive producer who was so diligent, who took such good care of us. Because he is a seasoned actor, he understands where we might feel uncomfortable, so he is very keen on realizing or checking on how we feel. We were so happy shooting,” Bae said.

Gong-yoo agreed, citing that Woo-sung, who is an actor himself, knew how to make his actors feel comfortable on set, and he would help in any way. “I could feel his passion in this project, and I could feel his affection towards all of us. You know, acting, shooting, it could be tiring, but because we had such a perfect executive producer, the presence of him was just a morale booster. So I really respect him. It was actually my first encounter with him because I haven’t worked with him together, so Jung Woo-sung was like a big celebrity to me. Because anyone of my age, especially for men, he was like an idol,” he said.

Suiting up for different characters

Shedding light on social issues was something Bae knew she wanted to do, so taking on a series that “could have the Korean sentiments, and would give a lot of food for thought” was something she believed could intrigue viewers and trigger everyone’s imagination.

However, for Gong, it was about taking on a different type of character; one that wasn’t his usual, cookie-cutter, polished, romantic roles “with a little bit of curl in my hair and things like that,” he said. He wanted to tell a different story through Han Yunjae.

Han Yunjae is the youngest expedition captain of the SAA, but is already hailed by others as a legend of the administration. According to Gong, Yunjae is a very duty-led kind of person, who always puts his other teammates first, and is a very stoic kind of character who does not reveal his emotions.

“You have to think about the history of the character. He is a former veteran, so I wanted him to have a more rugged and tough look to him, so you can be able to see how tough of a life he led through his appearance. If you look at the tattoo he has on his neck, he has an insignia of his former military unit. It’s not so much that I tried to create a ‘tough’ appearance, but I just wanted it to hint at the history this character had that we don’t really see in the series,” he added.

To completely embody the role, Gong said that he got a “little bit tanned” and had a “much more clean-cut hairstyle” – one which he said fans had “different opinions” about.

“But I want to let the fans know, that hair was not for Gong Yoo, it was for Han Yunjae. When you see the character in The Silent Sea, you’ll understand,” he said.

For Bae, it was the idea of taking on a “new story” that drew her to The Silent Sea, as the Korean actress is no stranger to working with Netflix on hit series. She was first put on the Netflix global map in her bad-ass starring role as talented kick-boxer Sun Bak in the American sci-fi series Sense8 from 2015 to 2018. She then took on the role of nurse Seo-bi in Netflix’s period political zombie thriller Kingdom from 2019 to 2020.

“This is my third series with Netflix. I think I’m traveling further distances. Now, I’m on the moon,” she said.

“With Kingdom, I really enjoyed it, it was quite a challenge but rewarding, but if I were to talk about the differences, each production is very different,” she added.

“I guess if you look at the time period, Kingdom is set in a former historical era, and then The Silent Sea is far into the future. It’s tough to say exactly what is different, but all of them are very different. And I chose to take part in this production because I wanted to tell a new story,” she said, noting that it wouldn’t be fair to compare both series.

For Gong, the main reason he chose to be a part of The Silent Sea is because ‘he’s “always wanted to challenge [himself] to play a role in a genre series, and as a member of the audience, he likes to consume content, sharing that he has always been very interested in the “dystopian backdrop.” With this, everything “kind of came together” for Gong, in terms of the subject matter, the story, and the backdrop. To him, it all felt very refreshing.

“I would even say that there was no particular reason not to join the production. I wouldn’t say always, but I am a person who wrestles with the idea, who looks into the idea of diversity often. There were a lot of times where I felt like we could do better, right? But we did not have a diverse range of content from Korea, I think,” he said.

“We hear a lot of stories that are within the same genre, so as an actor, I always thought a lot about expanding the horizon in terms of the genres. And if I could take part in a project that could do that, I wanted to do that,” Gong added.

“I think it’s going to be very different. I play a role that is different from my previous roles, and it’s a unique character, not like anything I’ve played before. I don’t want to bombard you with words, but I will leave you with this – if you watch the series, you’ll know.” – Rappler.com