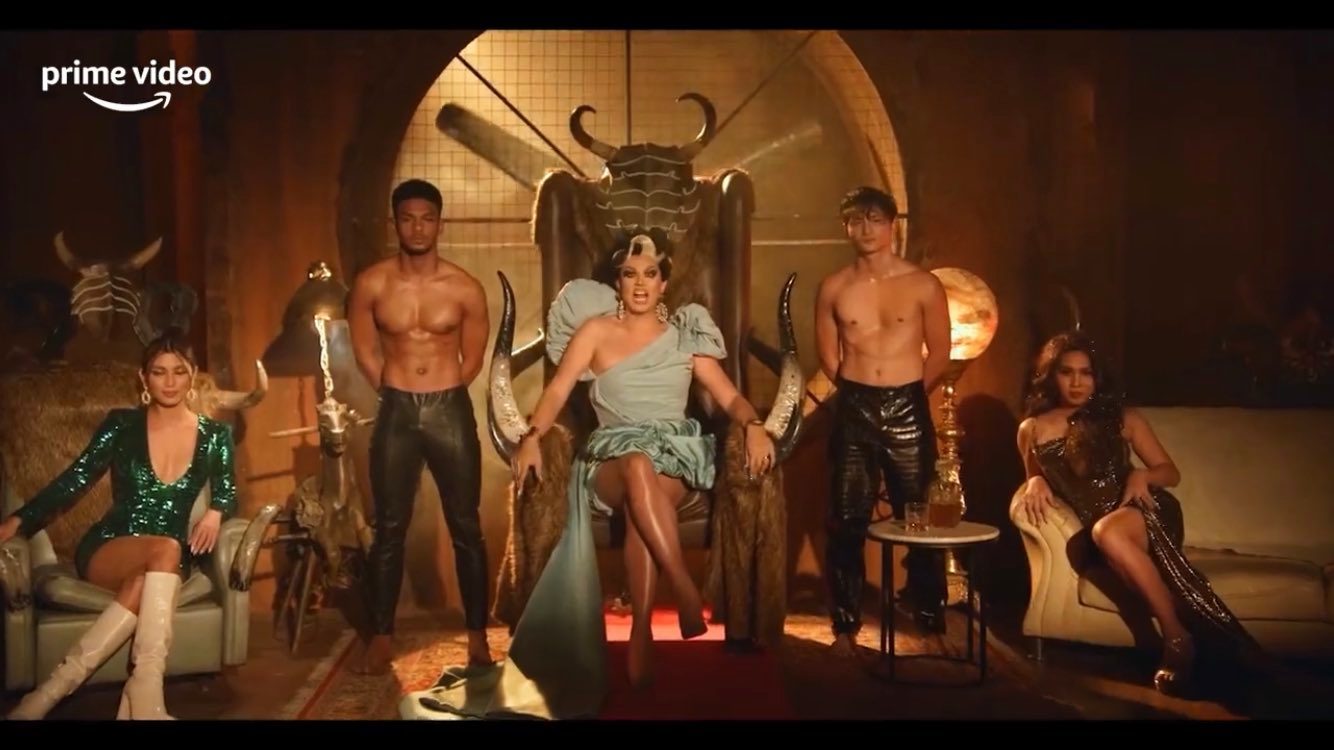 Facebook Twitter Copy URL
Copied
'Drag Den' dives into Pinoy kanal culture and distinguishes what is trash and almost trash — in better words, what is camp

In a hilarious scene from the second episode of Drag Den Philippines, Sassa Gurl mimics the accent of the show’s host and “Drag Lord” Manila Luzon as she reads a text on her toy phone: “Hoy mga bakla, anong sinasabi niyo tungkol sa akin? Bakla, ayusin niyo lang. GM. Manila Luzon (Hey bitches, what are you saying about me? It better be good. Group message from Manila Luzon).” The shtick, honoring Vice Ganda’s iconic may nag-text lines in noontime TV show It’s Showtime, quickly sends everyone into raucous laughter. Then Sassa quips: “Naloka ka ba? Putangina ka (Are you gagging? Fuck you),” generating another round of belly laughs.

This moment alone exhibits how well Drag Den Philippines knows its audience, diving into Pinoy kanal culture and distinguishing what is trash and almost trash — in better words, what is camp.

Arguably, 2022 was the breakout year of the local drag scene as the art form strutted its way into mainstream spaces, jumpstarted by the first season of Drag Race Philippines, which has been greenlit to return for a second installment. Following this feat, Drag Den Philippines, created and directed by Rod Singh and produced by Antoinette Jadaone, debuted on Amazon Prime Video on December 8. 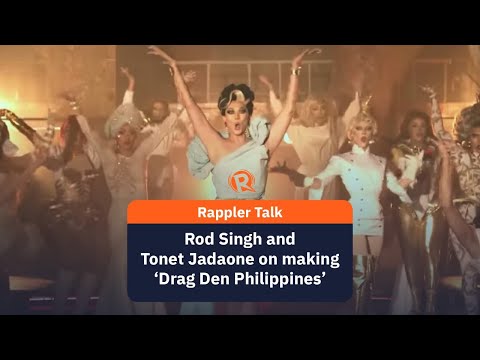 That Drag Race Philippines is a local franchise of RuPaul’s Drag Race already grants it an advantage, thereby setting the viewers’ expectations. The logic is, of course, to measure Drag Den Philippines against its predecessor, unwittingly sidelining artistic differences, budget constraints, and distinctions in the birthing process. While it still counts as a valid point of criticism, comparisons such as this tend to confine what a new work could offer, as if the viewing experience is solely defined by pointing out what is not present in it rather than what is actually there.

Yet Singh knows how to level the playing field by bringing the art of Pinoy drag back to its roots. Away from the glossy, pastel-toned world of Drag Race Philippines, Singh crafts a rather dark alternative situated in an actual underground den, lending the show not only its title but also the social commentary it hopes to drive. In fact, it has been said before that Singh glamorizes former president Rodrigo Duterte’s so-called war on drugs, but a closer inspection of the show says quite the opposite.

Transgression highly informs the show’s creation: from the very pun the concept of a drag den evokes, to Sassa Gurl’s farcical yet searing one-liners, down to Manila Luzon’s closing spiels that come with a read in every sense of the word. All of these contribute to the show’s critique of how ridiculous the idea of a drug war is and how the queer community often ends up as collateral damage to this cruel government mandate.

So it is no surprise that Drag Den Philippines lands a dedicated audience, long-time consumers of drag reality shows or otherwise, keeping an eye on what the solid roster of queens can offer: Aries Night’s dark and avant-garde drag (as embodied by her sincere “white lady” look, despite its rough execution); Barbie-Q’s understated brilliance (her genius rendering of Ara Mina’s controversial backless red gown in Joel Lamangan’s 2002 film Mano Po and her spooktacular “Ana Kapre” look in the “Aswangang Bayan” challenge) and comedic timing (the way she banters with Lady Gagita with her “you’re so funny” remark in the pilot episode, or when she asks the interviewer during her confessional about the advantage she gains after winning in the third episode since she can’t understand Manila Luzon’s English); Lady Gagita’s organic humor (perfectly captured by her “Pharma Lee” outfit made out of face shields and plastic sheets) and hilarious opening spiels; and Maria Cristina’s impassioned homage to Philippine culture (plus the drama conjured up by her unsolicited advice).

It’s also hard to ignore NAIA’s sharp wit (best depicted by her impersonation of Georgia Ferrero of the GMA drama Ika-6 na Utos, with the iconic Nerf gun to boot) and shady confessionals (the way she confidently says “you have to drag it up,” all while serving her witty yet bare “Wham Pipti” look); O–A’s contagious presence and devil-may-care remarks (“My goal this competition is to rank 8th,” “I chose the eggplant since it’s the second featured vegetable in the Bahay Kubo folk song and bahay kubo is our national house”); Pura Luka Vega’s odd yet astonishing drag and overall maturity; and Shewarma’s on-point and refreshing looks (from her insane Higantes Festival slayage, to her “Simbang Tabi” couture).

From the get-go, Singh knows better than to put the queens’ talents to waste, approaching the right people to steer Drag Den Philippines into a worthy work, despite the show’s financial limitations. Digo Ricio lays the groundwork for Singh’s vision, with a production design that chillingly details the internal mechanics of an actual underground lair. Mycko David’s camerawork elevates this atmosphere, balancing out what is happening on the main stage and behind it.

The inclusion of “Drag Runner” Sassa Gurl and “Drag Dealer” Nicole Cordoves also makes for a wise casting decision. Sassa, in particular, creates incredible chemistry with the rest of the cast, dropping hilarious comments one after another. For instance, when she finds Aries Night in a corner, she asks: “Ba’t nagsosolo ka? Wala kang kausap. Patago ka bang nagbabayis, ma? (Why are you alone here? Are you jerking off in secret?).” The comment is so unhinged that one can’t help but crack up, in spite of the earnestness of Aries Night’s response later on.

And contrary to previous claims, Singh’s deliberate decision to introduce a non-elimination format does not dilute the show’s impact, but instead ups the ante of its storytelling. By holding more space for the contestants, Drag Den Philippines also provides a more nuanced take on each drag queen’s artistry and the unique queer stories they carry, precisely because, more than claiming the crown, these artists show up to make the art form visible in hopes of staking their rights to livable wages and better working conditions within and outside the competition. The show’s effort to bring the scene to the streets, such as hosting a viewing party in a barangay in Quezon City, also serves as a doorway in extending such spaces. When we’re truly sincere about mainstreaming narratives that have long remained in marginal spaces, then why not maximize it, right?

From the rich library of references and Pinoy culture it anchors on, Drag Den Philippines forges a site where entertainment and social commentary intersect and where the art of drag turns into a snapshot of the cultural and material violence queer people have long endured and continue to endure. Because when we begin to untuck the stunning regalia and the hilarity behind each performance, all we get is a searing and brutal reality.

So, in episode five titled “Drag Mafia,” when Pura Luka Vega graces the aisle in dazzling red hair and a wedding gown yet ruins the look altogether, as though she’s ripping her heart open, and says “romantic love is a game of chance, and not everybody wins,” it’s hard to walk away and not recognize the pain. It cuts deep and heavy, especially in a country that relentlessly relegates queer people (this trans nonbinary writer included) to the periphery, whitewashes the basic human rights we have long struggled for, and reduces even our hopes to love and be loved into a pulp. – Rappler.com