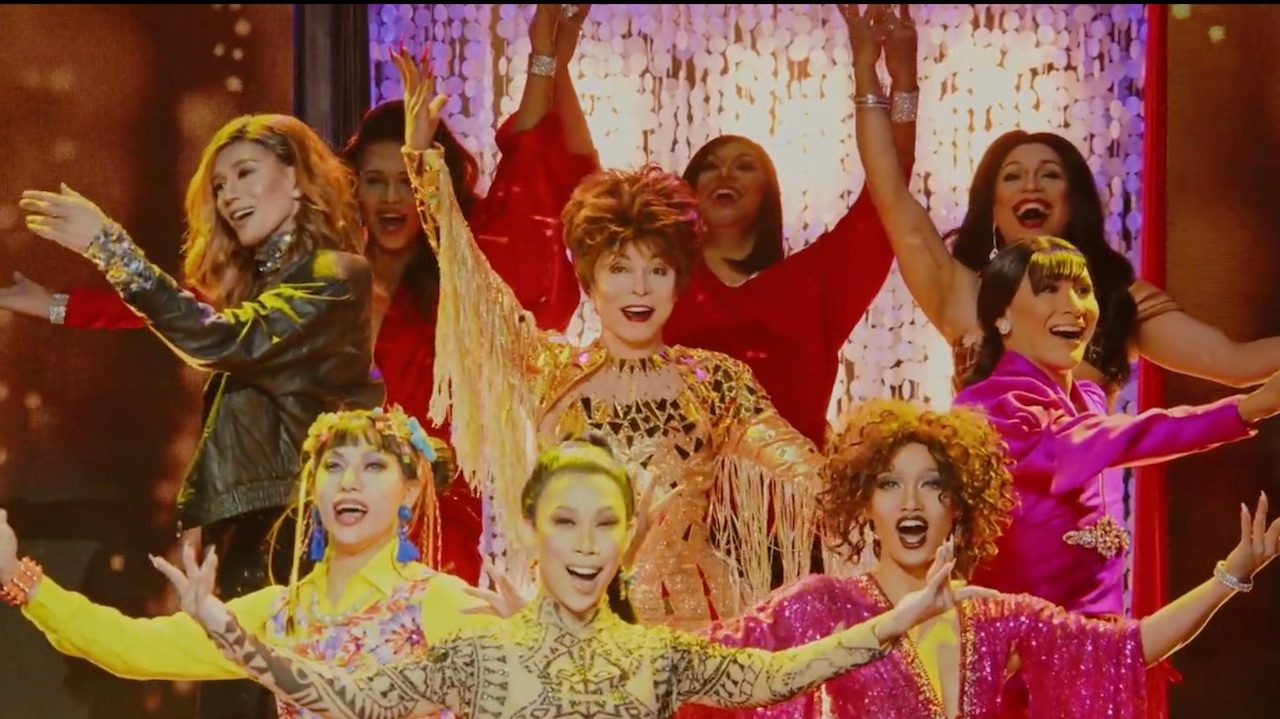 RUSICAL. The queens perform in a rusical where they channel OPM divas.

With hardly any filler queens and just nine queens left, the competition is getting tighter. Throw in the second performance challenge in a row and a gay icon on the judging panel, and you’ve got another intense episode that’s high on the drama.

Turing is fresh from her girl group maxi-challenge win, while Xilhouete is reeling from being in the bottom and lip-syncing for her life. The episode kicks off with a mini-challenge, where the queens play a classic Filipino game: 10/20 with the Chinese garter. They group themselves into threes: Xilhouete, Marina Summers, and Minty Fresh in one group; the Divine Divas Brigiding, Viñas Deluxe, and Precious Paula Nicole in another group; and Turing, Eva Le Queen, and Lady Morgana in the third group.

Before they start playing, they put on their best baby gay drag looks – and they all nail it for the most part, except for Lady Morgana, who ended up looking more like a tiyahin than a kid.

After a well-played game of 10/20 with some spectacular cartwheeling work, Brigiding’s and Turing’s team came out on top, with Eva being named the overall winner and bringing home a P20,000 cash tip.

Host Paolo Ballesteros then announces the week’s maxi-challenge: a rusical where the queens have to channel a Filipino diva assigned to them. Eva got Jolina Magdangal, Brigiding got Jaya, Viñas got Zsa Zsa Padilla, Xilhouete got Pilita Corrales, Minty got Moira dela Torre, Turing got Sharon Cuneta, Marina got Sarah Geronimo, Lady Morgana got Lea Salonga, and Precious got Regine Velasquez – who also happened to be that week’s extra special guest judge.

The queens quickly get to rehearsing, and Viñas can’t seem to get over not being assigned to Regine. Some of the queens get nervous at working with Mr. Powerdance himself, legendary choreographer Douglas Nierras, and true enough he turns out to be a strict dance coach, calling out the queens – particularly Xilhouete – every time they miss their cue.

The queens then prep for their performance, and their werk room conversation revolves around the state of drag in the Philippines. As they prep, Lady Morgana seems to struggle with bringing Lea Salonga to life, and can’t pick a wig to use.

Finally, the queens take the stage, nailing the choreography despite struggling through it in rehearsals. After performing in an intro, they each get their own solo verses on stage to really bring their OPM divas to life.

Xilhouete opens the show and is a dead ringer for Pilita Corrales, while Brigiding, Eva, Turing, and Marina also bring their A-game as they channel their divas. Precious closes the show looking like Mama Reg’s twin. Viñas also manages to bring Zsa Zsa Padilla to life, despite a clockable wig line.

When it comes to the runway, all the queens stun in their white pearl looks, though there are a few standouts: Xilhouete for her Sharon Stone ensemble being torn off to reveal a bombshell pearl corset, Viñas with a high-low look with pearl fringes and a pearl crown, and Precious in her pearl column gown and giant pearl orb.

Minty, Brigiding, and Eva Le Queen are marked safe – though before they leave the stage, the judges remind them that “safe is a dangerous place.” Singling out Minty, Jiggly says, “I told you to wake the fuck up.”

Xilhouete, Viñas, Marina, and Precious are the tops of the week, with the judges praising both their rusical performances and their runway looks.

Despite bringing Sharon to life in the rusical, Turing is clocked for what the judges think was a “forgettable performance,” and a dress that they say made her look like a wedding sponsor.

Jiggly in particular gives Turing a dressing down, saying that she expects more from bigger girls. Turing – who had just won the maxi-challenge in the previous episode – gets emotional as she defends herself and apologizes to Jiggly for disappointing her.

The judges think Lady Morgana did just okay in the rusical, and find her runway look to be lacking. Kaladkaren says she wishes Lady Morgana played up more elements in her look, instead of just draping two pearl necklaces across her shoulders.

While Morgana is given critiques, Turing gets wobbly and looks like she is about to faint. She is assisted off the stage and sits down, returning to the stage after an hour.

At the end of the critiques, Viñas and Marina are safe, while Xilhouete and Precious land in the top two. It’s a redemption for Xilhouete after her bottom-two performance just the week before. Ultimately though, Precious wins the maxi-challenge, bringing home P80,000 and her first Ru badge.

As expected, Turing and Morgana land in the bottom, and they lip-sync for their lives to Regine’s “Shine.” In the confessional, Turing says she’s aiming for a double shantay, not wanting to send Morgana home.

Turing gives an emotional performance, and strips off her gown to reveal a white bodysuit. Morgana pulls out several wig reveals and a surprise confetti blast.

After the lip-sync, Mamwa Pao calls on Lady Morgana, and gives her the shantay. Turing is left onstage, and for a beat, it feels like her confessional wish might come true, and that the season’s first double-shantay might happen.

Ultimately though, Paolo tells her to sashay away. Turing inevitably gets emotional as she thanks the judges and signs off with her signature line.

“I just had a bad day. It doesn’t necessarily mean I had a bad drag. Thank you for giving an opportunity to this chubby little gay guy,” she said.

Before Turing leaves, a tearful Jiggly calls to her and says, “Turing, you didn’t disappoint me.” The camera pans to the rest of the judges, who are also emotional. Turing makes her exit, leaving everyone in tears.