MANILA, Philippines – This week’s Drag Race Philippines episode is perhaps the one that most fans were hyped up about. It’s Snatch Game, after all, one of the main events of every Drag Race season, and, as RuPaul himself said, the challenge that “separates the basic bitches from the fierce-ass queens.”

For the uninitiated: Snatch Game tests the queen’s improv, impersonation, and comedy skills as they portray famous celebrities while playing a parody of the game show Match Game.

Snatch Game episodes serve equal parts cringe and comedy – and the flops are almost as entertaining to watch as the queens who do well.

There’s a lot to love in Drag Race Philippines’ Snatch Game episode from the start – not least of which was RuPaul quoting the late, great Cherie Gil’s iconic line “You’re nothing but a second-rate, trying-hard copycat!” in his video message for the week.

And of course, the fact that finally, Filipino viewers get a Snatch Game where we can understand ALL the references is something that will should definitely be celebrated.

However, the 1.5-hour runtime was something of a bad omen from the beginning. There’s no good reason for a Snatch Game episode to last that long, and coming from the train wreck that was last week’s Miss Shuttacca episode, it was worrying to see. 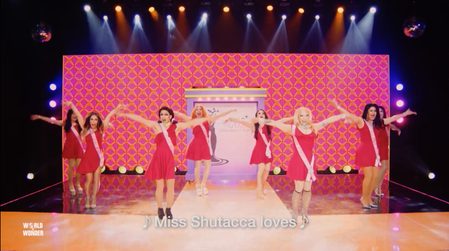 When the episode begins, the queens get emotional over Lady Morgana’s departure after she lost the lipsync to Brigiding.

Host Paolo Ballesteros then walks into the werk room to announce that again, there would be no mini-challenge – just the most-awaited maxi-challenge, Snatch Game KNB? He also announces the runway theme for the week: 2-in-1 ruvelations.

“Whoever wins the Snatch Game becomes unforgettable,” Precious says, as the queens reveal their character picks.

The queens set their eyes on Marina, as last week’s winner, and on Viñas, who is a comedy queen and a veteran impersonator.

Putting the ‘drag’ in ‘Drag Race’

We then meet the queens as their characters. Eva is a convincing Rufa Mae Quinto, “also known as Quinto, Rufa Mae.” Marina goes straight to a political dig as she introduces her GMA, saying “Nung nagigising ako kanina, nung narinig ko yung salitang ‘snatch,’ bumangon agad ako (When I woke up this morning, when I heard the word ‘snatch,’ I got up right away)!”

Xilhouete gives her best Belo with a frozen expression on her face, and Eva’s description of her look is spot on: “It’s like you channel the essence of Vicki Belo in the rotten corpse of Michael Jackson.”

Precious is a dead ringer for Charo Santos, and comes prepared with the props – a bunch of letters and a pile of moles. Viñas nails Kris’ iconic expressions “My God, nakakaloka!”

As they play the game, some queens evidently struggle to land the jokes. Brigiding takes her answers too seriously and she herself says in the confessional: “Nanliliit ako, oh my god hiyang hiya ako (I feel so small. Oh my god, I feel so embarrased).”

And the game goes on…and on, and on. The queens get a lot of good jokes in – “Mr. Tampalpuke” from Eva, “Cha-cha on the floor” from Marina, and a Mimiyuuuh gag from Xilhouete.

In the confessional, Xilhouete says she is riled up by Viñas constantly riffing with her (but it is Snatch Game, so really, what did she expect?) Whatever the case, Viñas’ interactions with Xilhouete seemed to work in her favor, giving her Belo a lot of opportunities to shine.

At some point though, the jokes just started to get old. There were only so many mole quips that Precious could squeeze out, and Xilhouete’s frozen Belo face wasn’t nearly as funny as it was at the beginning.

Viñas then made a sharp turn by switching characters to Boy Abunda in the middle of the game and it was a gamble that ultimately failed as she struggled to keep character and keep the jokes coming.

After Viñas’ switch, it all kind of felt like it went downhill from there. There were so many cuts to long and unfunny jokes from the panelists, too much awkward back-and-forth between the characters.

Ultimately, this Snatch Game put the drag in Drag Race – and not in a good way. The queens’ comedy might have benefited from a cleverer script and a tighter edit.

After about 30 minutes, Snatch Game finally ended, and not a minute too soon.

Finally, it’s runway time, and the queens show us their takes on the 2-in-1 ruvelation theme.

Brigiding emerges in a peacock showgirl look, Marina serves ballroom dancer realness, Minty attempts to make a statement with a look that goes from chains to ’80s prom dress, Precious is inspired by Pokemon with a look that evolves from Eevee to Flareon.

Viñas tucks her second dress under her first wig, Xilhouete serves three looks starting with a Tina Turner-inspired number, and Eva walks out in a plain white dress that she splatters with paint at the end of the runway – an ode to (and dig at) MMDA Art.

After the runway, Mamwa Pao kicks off the critiques by expressing her disappointment in the queens’ looks.

“It’s underwhelming…. It’s ruvelation… Do you even know what ruvelation means?” she said.

Precious is the only one who is safe in this episode, and she is sent to wait in the werk room.

Marina emerged as one of the tops of the week, with guest judge photographer BJ Pascual saying, “You just kept going and going,” though judge Kaladkaren said her runway look was “just meh.”

Xilhouete was also one of the tops, with the judges praising her for taking a not-so-funny character and making her funny. They also appreciated her three-in-one look.

Eva also emerged on top for the first time in the competition, being called the “breast actress” for her Rufa Mae impersonation, and being lauded for her Alexander McQueen-inspired runway look.

Landing in the bottom was Viñas, who disappointed the judges when she switched characters to Boy Abunda after doing so well as Kris Aquino. They also clocked her runway look, with Jiggly saying about her second dress: “That fabric looked so cheap.”

Brigiding was also in the bottom, with Kaladkaren telling her: “I just felt like the jokes weren’t really landing… Your answers were so serious, they weren’t witty at all.” She also said that Brigiding’s look was predictable.

Joining them in the bottom was Minty, whose Snatch Game performance was clocked for being one-dimensional. Kaladkaren asks her: “Ang question ko naman, feeling mo ba masasave ka ng kagandahan mo (My question is, do you think your beauty can save you)?”

After deliberations, Marina is marked safe. Eva and Xilhouete are in the top two and Xilhouete is ultimately awarded the win for that week, giving her her first Ru badge and P80,000.

Viñas is also marked safe, leaving rivals Minty and Brigiding to lipsync for their lives to Maymay Entrata’s “Amakabogera.”

Minty Fresh serves the first lipsync death drop on Drag Race Philippines and it proved to be worth it after Mamwa Pao tells her to shantay at the end of the lipsync. She walks to safety, leaving an emotional Brigiding on stage.

“Tangina…. I’m feeling bad…. Wala na ba akong ibubuga (Do I have nothing left to give)?” Brigiding says, when Paolo asks her how she is feeling.

To which Mamwa Pao responds: “Brigiding, alam naming may ibubuga ka pa (we know you have more to give)” and shocks viewers when she awards the first double-shantay in Drag Race Philippines herstory.

Once mythical, the double-shantay seemed reserved for truly epic lipsync battles – Alyssa Edwards and Tatianna on All-Stars 2, for instance, or Brooke Lynne Hytes and Yvie Oddly in season 11.

In recent seasons though, it seems like it’s become more of a crutch for producers who want to extend the life of the show…as in the case of Symone and Kandy Muse in season 13, for example, and perhaps also in the case of Brigiding and Minty Fresh.

In the immortal words of Tatianna, “We all make choices, but that was a choice.” That double-shantay certainly was a choice, leaving us with seven queens STILL in the running to become the Philippines’ first drag superstar.