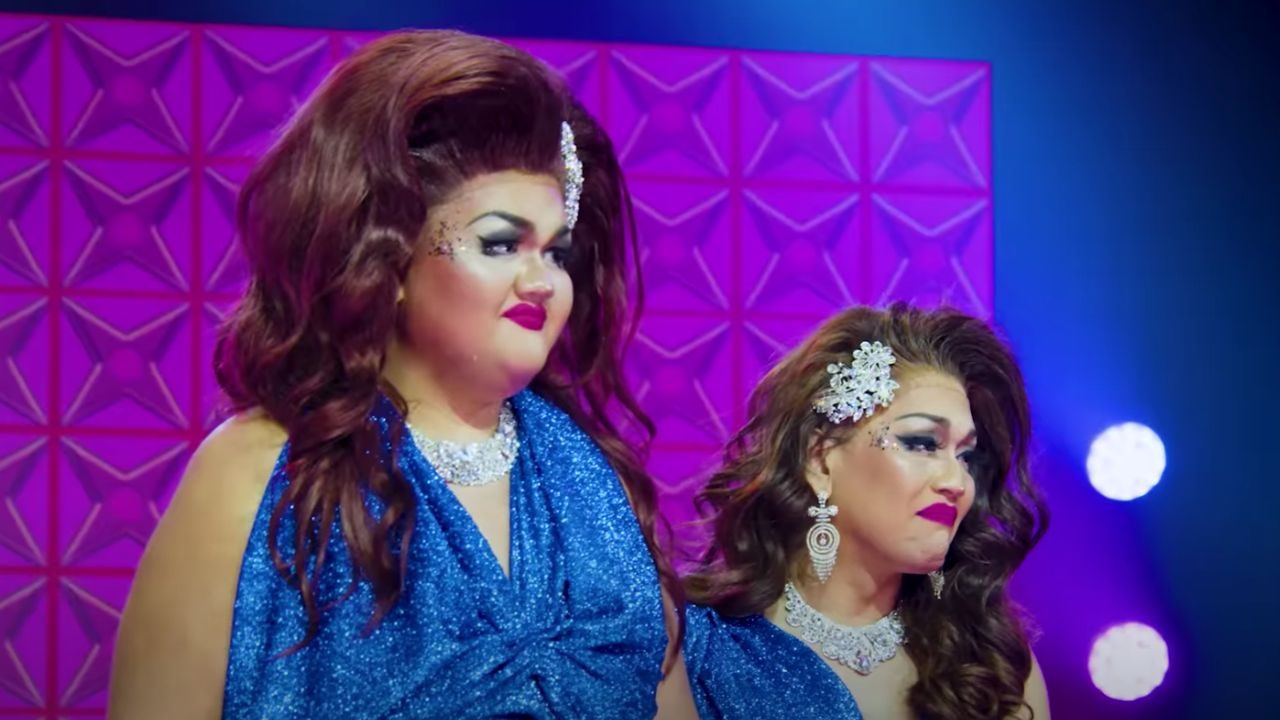 MANILA, Philippines – Just like that, we have eight episodes of Drag Race Philippines. Let’s be honest, coming into this one was not easy – alam mo ‘yan, Marina! –  because HOW ON EARTH do we move on from last week’s elimination of early frontrunner, fan favorite, and loveable loudmouth Viñas Deluxe?

And yet, in spite of ourselves, move on we did, thanks to a heartwarming makeover challenge that brought the queens’ loved ones into the werk room and on the runway.

We’ve had a pageant episode, an OPM Divas episode, Pinoy folklore runway themes, and a palo-sebo mini-challenge, but this episode might just be the most Filipino of them all, because it revolves around family – the ones the queens are born into, the ones they choose, and the ones they have found on the show.

The resulting episode is like if Drag Race married Four Sisters and a Wedding and gave birth to Tanging Yaman and Maalaala Mo Kaya.

Now, the episode doesn’t get off to the best start. As much as I’d like to forget it ever happened, let’s talk about that mini-challenge, the infamous reading challenge, where the queens must insult each other in the funniest way possible.

We knew it would happen at some point. After all, in the Drag Race universe, reading is (what?) fundamental. But our Filipino queens’ attempts to read each other to filth leave most of us wishing that the library remain padlocked forever and ever eme.

“Why is everyone so lame?” Eva Le Queen says, magically reading everyone’s minds from the confessional. With the least cringey reads, she wins the mini-challenge and P20,000.

Host Paolo Ballesteros then introduces the week’s maxi-challenge: a makeover where the queens have to put their loved ones in drag, in a look that matches theirs.

One by one, the queens’ makeover subjects are revealed as they walk into the werk room. Marina Summers is joined by her youngest sister Mariel, and Eva reunites with her best friend Marvin.

Brigiding is slightly confused when Paolo calls out a John Paul, who turns out to be a gay cousin she hasn’t seen in a while, but grew up with when they were kids.

Xilhouete is full-on crying by the time she is reunited with her partner, Gel, and Precious Paula Nicole is joined by their family’s bunso, her youngest brother John Carl (or, as we later discover, John-John, uwu), who came all the way from Bicol.

Amid all the touching reunions, Minty Fresh sees her sister Rizza walk into the room, and she hardly seems pleased – in fact, even disapppointed.

She walks out of the werk room and is seemingly on the verge of an anxiety attack. Xilhouete, in true drag mother fashion, follows Minty and asks her what’s wrong.

At this point we learn that Minty is anxious because her sister being there and out of the house poses a risk to her family’s health – a reminder that this show was filmed at the height of the COVID-19 pandemic.

Runs in the family

In the werk room walk-through, we learn the drag names the queens have given their loved ones, and also get a little bit of back story.

Marina and her sister, drag name Marites Summers, share stories of playing dress-up as kids and pretending to be on Top Model.

The Preciouses – Precious Paula and her brother, drag name Precious Chona – live up to their name by being 100% adorable. At this point, we just know this is the tandem that’s going to make everyone feel fragile throughout the episode.

Brigiding and her cousin, drag name Tigiding, talk about growing up gay together, and Eva shares how important her friendship is with her BFF, drag name Luna.

We learn that Xilhouete and her partner, drag name Xhadow, call each other “Pika,” short for Pikachu. Minty introduces her sister as Berry Fresh, but the lack of warmth between them makes us wonder if there’s more friction in their relationship beyond Minty’s COVID anxiety.

As they get ready for the runway, Precious shares a sweet little story about how John-John was bullied for his height in school and how their mom, who passed away a few years earlier, would accompany him to school to protect him.

At this point, my spidey senses tell me that the producers/editors are using the Preciouses to emotionally manipulate us, the audience, but for these siblings, I’ll allow it.

(When I was putting make-up on my brother, I looked in the mirror and caught a glimpse of Mama. That’s when I realize that this is what Mama left me, so I won’t miss her too much).

All of it is very touching, but soon enough, it’s time for the runway.

Mamwa Pao walks onto the main stage in a golden corset armor thing, introducing the judges: mainstays Kaladkaren and Jiggly Caliente, recurring judge Rajo Laurel, and beauty influencer Patrick Starr, who is the extra special guest judge for the week.

Eva and Luna kick off the runway presentation looking like rich titas in rhinestoned wigs and velour caftans, which they strip off to reveal shiny mini dresses and thigh-high boots as part of their party girl skit.

Xilhouete and Xhadow enter with some kind of interpretative dance, which really accentuates their sleek statement-shoulder dresses, identical except for the colors: smoky black for Xilhouete, and fiery red and orange for Xhadow. Both of them are also wearing Xilhouete’s trademark long sleek black hair.

Marina and Marites Summers walk out looking like besties about to party on a boat, carrying colorful cocktails and wearing green and yellow ensembles – reminiscent of a look worn by RuPaul’s Drag Race lipsync assassin Jorgeous, who, incidentally, Marina has been compared to many times.

Brigiding and Tigiding go the mother-daughter route, with Brigiding wearing a printed baby doll dress and pigtails and bouncing around like a child as Tigiding sashays and sways, looking regal in a caftan and turban in the same print as Brig’s dress.

Minty and Berry Fresh go the pop-girl route in ruffled short mint dresses. There’s some sort of toothpaste skit in there, but it hardly comes across.

The Preciouses come out looking like disco queens in sparkly blue dresses, big hair, and silver accessories. They do a little dance where Precious Paula seems to coax Precious Chona out of her shell.

(I want to show off my sibling to them. This is what should be shown in this challenge. My love for my brother, my brother’s support for me. I’m not going to waste this moment.)

Of course, they saved the most heartwarming pair for last. Again, I am here for this emotional manipulation.

At judging, Eva and Luna were praised for the joy they brought on stage, as well as their polished looks. Kaladkaren says she wants to join in on whatever party they’re at.

The judges are taken by Xhadow’s beauty, short of asking her to join the competition herself, and Xilhouete looks on proudly. The judges also praise the couple’s presentation, and Xilhouete’s make-up skills and styling, leading Jiggly to say, “Xilhouete you fucking bitch!”

In Drag Race Philippines tradition, Xilhouete extends the episode’s runtime by about 100 minutes, as she thanks the judges for their critique and opens up about how tired she’s been in the past few weeks.

Marina and Marites are clocked by Rajo because according to him, “in this world of haute couture, I see ready to wear,” though Patrick Starr was quick to praise their faces.

When it came to Brigiding and Tigiding, the judges say that Tigiding stole the show – a dream come true for Tigs, who grew up being forced into masculine activities, but not good at all for Brigs.

Jiggly makes a fine point as she tells Brigiding: “At this point in the competition, that cannot happen, and the position you’re in in this competition, you cannot afford that.”

In the confessional, Brigiding says that even if seeing Tigiding shine got her bad critiques, it was all worth it – and we come to realize that this queen may or may not have a brand, she at least has a heart.

Despite their less-than-warm interactions, Berry and Minty impressed Kaladkaren, who says they were “a joy to watch” and praises Berry for the effort she made for her sibling. Their presentation, however, left the judges confused and wanting more.

The grand finale for the critiques comes down to the Preciouses, and the supershy Precious Chona can hardly get a word out, except to say how proud he is of his Kuya. It is here that we learn that John-John is an actual sweetheart and must be protected at all costs.

So John-John’s dress looks unfinished. And their wig lines are a little weird. But the judges don’t seem to care. This is the Philippines after all! Emotions win over everything!

Rajo Laurel, who brought his claws out in the previous episode, was reduced to putty as he tearfully tells the Preciouses: “For me this is the most emotional connection.”

“Even when I was not looking at everybody, and I was looking at you, how you took care of John-John, nahihirapan siya, nandun ka, naramdaman ko yun eh (He was having a hard time, you were there, I felt that). And bilang bakla, para sa atin (as gay men, for us), it’s a privilege to take care of our families…and Precious I felt that,” he says.

The rest of the judges (and probably the rest of the world) also lose it. Jiggly recalls her own brother, whom she describes as her much-needed protector as a trans woman.

Indeed, in Drag Race Philippines reading is not so fundamental, but family certainly is.

After the critiques, the judges “make punas-punas their uhog” and decide who wins and who is in the bottom.

Eva, Xilhouete, and Precious are in the top three, but Xilhouete ultimately wins the challenge, bringing home her second RuBadge, and another P80,000.

Of course, it’s not a Xilhouete win without another Ted Talk that nobody asked for, this time about being a drag mother. At least she matched this week’s homily to the episode’s theme.

“Thank you Xilhouete, sobrang dami mo na rin nasabi (you’ve said so much),” Mamwa Pao says, on behalf of us all.

Marina, Minty, and Brigiding land in the bottom, but Marina manages to escape the bottom two, leaving Brigiding and Minty to lipsync for their lives against each other for the second time in this competition.

As you may recall, the two first faced off two episodes back, lipsyncing to Maymay Entrata’s “Amakabogera” at the end of the Snatch Game. The result of that was a questionable double-shantay that extended Brigiding’s life on the show.

This time around, the two lipsync to “Dyosa” by Yumi Lacsamana. They each come prepared with their own gags, which indicates that they probably knew they were gonna be in the bottom this week. Brigiding does a ruveal into an ice-blue flapper dress. Minty pulls out a sash that says “Dyosa” from her chest, and later on, a sparkly rainbow flag from her ass.

In the end, Minty gets to shantay, and Brigiding sashays away.

Five queens are left in the competition. If the show follows the format of RuPaul’s Drag Race, that means we’re one elimination away from the final four who will battle it out in a lipsync extravaganza in the finale. – Rappler.com