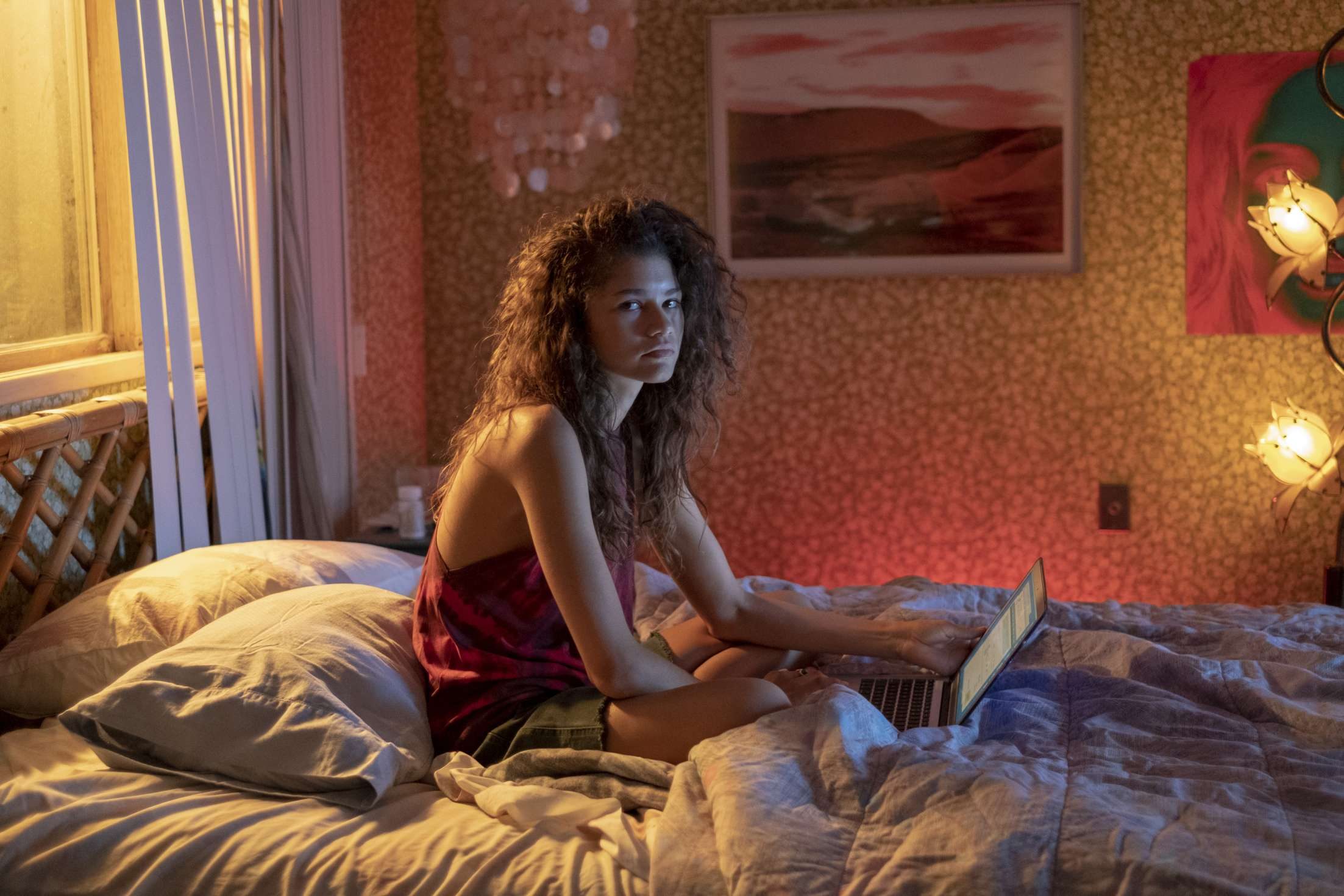 Facebook Twitter Copy URL
Copied
Despite its uneven writing, little narrative coherence, and excessive provocations, season two of ‘Euphoria’ continues to be unusually captivating thanks to its talented cast

Everything I know about Euphoria, I learned against my will.

Prior to last week, I had little intention of watching the show. “Make sure you’re in a good mental space before you watch it,” a friend warned me years ago. “It can get really heavy and triggering.” I waited for the right time but it never seemed to arrive. But when the short clips and memes began invading my timeline, it seemed that the time to watch it was now.

Adapted and Americanized from an Israeli television show of the same name, Euphoria follows a group of troubled high school teenagers as they navigate the fine line between adolescence and adulthood, filled with thrills and traumas. After binge-watching its titanic first season and the minimalist yet emotionally riveting two-part special, it became apparent why Euphoria was such a success. While its script leaves you wanting, much of the levity and the emotionality of the storytelling is condensed in its visual language: referencing music videos, films like La Haine and Brokeback Mountain, and paintings by Edward Hopper (excellently explained in this video essay). Euphoria is less concerned about the accuracies of high school and is more concerned with communicating the feeling being in its throes: the claustrophobia and loneliness, but also the elation and the sweeping moments of grace – almost as if attempting to connect to these moments in hindsight.

The central relationship between Rue (our protagonist and guide, played by Emmy winner Zendaya) and Jules (Hunter Schaefer) fulfills the promises of the show’s title. Even as Rue’s addiction brings them together and tears them apart, the intimacy between the two sets off sparks that are enough reason to watch weekly. Their relationship is fundamentally a case of dependency: oscillating between platonic, romantic, and even filial – a drug that seems finally good for Rue until it’s gone.

In their orbit are a bevy of characters whose brokenness seems impossible to look away from: the jock with aggression issues and internalized homophobia, Nate (Jacob Elordi); his on-and-off girlfriend Maddy (Alexa Demie) who bears the emotional weight of his frustrations; the promiscuous popular girl Cassie (Sydney Sweeney) trying to maintain a relationship with a college athlete McKay (Algee Smith); the fanfic writer-turned-cam sex girl Kat (Barbie Ferreira); the laid-back but fiercely loyal drug-dealer Fezco (Angus Cloud), just to name a few.

Euphoria pushes back against the bright and wholesome coming-of-age stories of films like Booksmart and television shows such as Sex Education, opting to shine a light on material much more difficult to discuss: drug addictions, toxic relationships, nudity and sex, violence, and physical and psychological abuse, among others. In other coming-of-age stories, growing up means a simple loss of innocence, exaggerated by naiveté. But in Euphoria, the characters in  a tech-addled world are no longer innocent and, therefore, lose a lot more.

The second season wrestles with the killer of all sequels: expectation. It is difficult, nearly impossible, to replicate the magic of the first of anything and in its three-year hiatus, the audience has grown reflective of the material and thrown creator Sam Levinson questions that are essential moving forward: How will it respond to criticism? Will it continue to provoke audiences with its excessiveness or will it push itself to explore an entirely different landscape? What happens if the cast has outgrown the characters and how their stories are presented? How will the show engage with its audience without sacrificing truthfulness?

In response to these pressures, Euphoria entered into darker, more adult territory (as said in Zendaya’s disclaimer). The season has centered on an assortment of relapses fueled by a well-spring of shame, guilt, and grief – the characters hurtling towards self-destruction to avoid dealing with the consequences of their decisions in the first season. Rue returns to drugs after Jules abandons her for the city; Jules grows jealous of Rue’s newfound friendship with Elliot (Dominic Fike), who is secretly doing drugs with Rue; Cassie is depressed following her abortion and break up with McKay, and begins a secret relationship with Nate; Kat begins to doubt her relationship with Ethan (Austin Abrams); Fezco (Angus Cloud) deals with the aftermath of a bad deal while building a budding relationship with Lexi (Maud Apatow), who is staging a play about their life. Meanwhile, the adults all have their own reckoning with how they may have fucked up their children — their kids increasingly becoming a reflection of not only their parenting but themselves.

It’s a lot. In the first season, it was still possible to keep up with Euphoria because it was situated within a larger world. The characters took the stifling rules of high school and played with them to their advantage: from Kat flipping the script on the principal when her sex tape goes viral, to Nate’s manipulation of Jules through her nudes. Weak individual character arcs were strengthened as they wove into other characters’ journeys, knitting a tapestry of the entire community and larger commentary on how teenagers can be manipulative, too. Naiveté and youth were integral to Euphoria’s appeal and believability: they don’t know better until knowing better is useless.

But the beginning of the second season feels like a giant step back. The show drops the ball on its most interesting and radical characters: Cassie and Jules are reduced to boy-crazy jealous types, while whatever little screen time Kat has is dedicated to disempowering her for no reason. Naiveté and youth is replaced by jadedness and exhaustion that draws the color from every frame, exemplified by the shift from the baby doll aesthetic towards darker tones in the costume design and color grading. Occupying this tonal and thematic extreme is simultaneously reflective of the increasing cynicism during the pandemic and the three-year gap between seasons, forcing the story to mature faster than it was ready for and untethering it from the reality which it tried to represent.

Especially in the first four episodes of the second season, Euphoria struggles to find its footing and encounters difficulty juggling its ensemble. The hiatus seemed to fracture the storytelling: with character journeys increasingly isolated from one another. Rather than teasing out opinions and behaviors through their interactions with others, Levinson is focused more on the internal processes, and the product is a season that is made up of isolated moments with little stringing them together to create something better through the sum of its parts. Sure, they’re moments that are clickable, shareable, memable, and rewatchable, but there is little difference when the scenes are within the context and when they’re taken out of it. Why watch a show when I can just pick scenes that I like and watch them on Twitter?

On paper, I am describing uncompelling and frustrating television. But the cast performs the hell out of it: Sydney Sweeney’s descent from slightly unhinged teen into prototypical madwoman is as heartbreaking as it is exhilarating; Maud Apatow breaks away from the background as Lexi and enters into the spotlight in the seventh episode through a play she wrote, an episode of Euphoria that gives in to its delightful indulgences even at the expense of verisimilitude (High schools with theater budgets? No censorship? Doppelgangers for all the main characters? How?); and Zendaya continues to prove why she is an Emmy winner, especially in the fifth and sixth episodes, which reminds audiences that the heart of the show has always been Rue.

Despite all the faults of Euphoria, it is still oddly comforting misery. Maybe it’s because the world is already fucked up and it’s fun to see other people with lives far worse than our own. Maybe it’s because we want to see characters, flawed as they are, overcome trials that seem impossible to beat. Or maybe because in the brokenness, no matter how badly written, we find parts of ourselves reflected in the shards. And that gives us a high, even if it is temporary. – Rappler.com