‘Friends: The Reunion’ to premiere on HBO, HBO GO for Philippine viewers 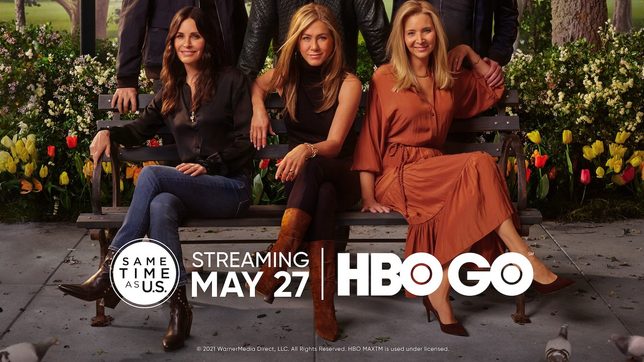 REUNION. The cast of hit sitcom 'Friends' come together for a TV special.

The long-awaited Friends reunion special is set to premiere soon, and Filipino fans will be able to watch at the same time as the US viewers via HBO GO.

Friends: The Reunion will be available on the HBO streaming platform on May 27 at 3:01 pm. A TV broadcast will air later on the same day at 9 pm.

Friends first aired in 1994 and ran until 2004, becoming one of the most beloved sitcoms in TV history. It follows a group of 20-somethings as they navigate life and love together in New York City.

The show’s stars Jennifer Aniston, Courteney Cox, Lisa Kudrow, Matt LeBlanc, Matthew Perry, and David Schwimmer will be reuniting for the first time in 17 years, returning to the sitcom’s original soundstage, Stage 24, on the Warner Bros. Studio lot in Burbank.

The event will be an unscripted special, where the cast will be joined by moderator James Corden and a roster of celebrities as they relive the show’s most unforgettable moments.

Friends: The Reunion was directed by Ben Winston, and executive produced by its original producers Kevin Bright, Marta Kauffman, and David Crane. – Rappler.com