MANILA, Philippines – Game of Thrones creator George R.R. Martin has given his stamp of approval to House of the Dragon, after seeing a rough cut of the first episode of the prequel series.

In his blog post on Wednesday, December 29, the author reacted to IMDb naming House of the Dragon as the most anticipated television series of 2022, saying that he’s also excited for the show.

“I’ve seen a rough cut of the first episode. And loved it. It’s dark, it’s powerful, it’s visceral…just the way I like my epic fantasy,” he wrote.

Martin also praised showrunners Ryan Condal and Miguel Sapochnik for doing an “amazing job.” He continued, “Just as with Game of Thrones, most viewers will only have heard of a few actors, but I think you are going to fall in love with a lot of them. (Only to have your heart broken later when…but no, that would be telling).”

“I think the Targaryens are in very good hands. Anticipate away. I do not think you will be disappointed,” he added.

Based on George R.R. Martin’s 2018 novel Fire and Blood, House of the Dragon tells the history of House Targaryen and the Targaryen civil war that became known as the “Dance of the Dragons.” It is set 200 years before the events of Game of Thrones.

This better be good: HBO Max releases ‘House of the Dragon’ first teaser 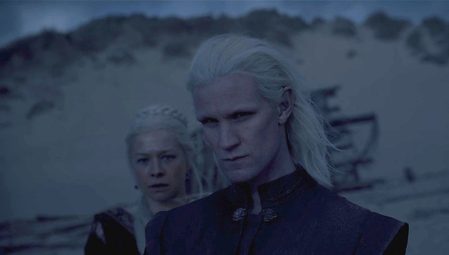 HBO Max released first look images of the characters in May and the series’ first trailer in October. The 10-episode prequel series is scheduled for release in 2022, but a specific premiere date has yet to be announced.

Game of Thrones, a medieval fantasy series, was a global phenomenon for HBO. It bagged several awards during its eight-year run, including Emmy Awards for Outstanding Drama Series in 2015, 2016, 2018, and 2019, as well as Golden Globe nominations in the same years. – Rappler.com