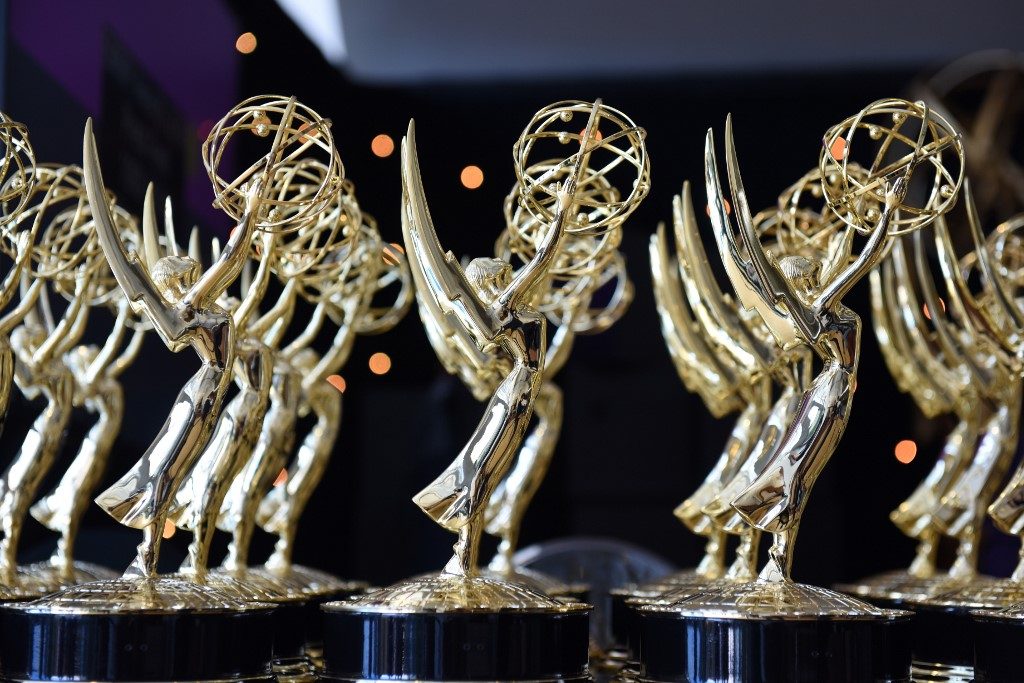 In this file photo taken on September 17, 2018, Emmy statues are seen before the 70th Emmy Awards at the Microsoft Theatre in Los Angeles, California. - No red carpet, no star-studded audience and no "Game of Thrones" -- this year's Emmys honoring the best in television promise to be radically different as producers scramble to create Hollywood's first major pandemic-era award show. The coronavirus has turned Tinseltown upside-down, bringing productions to a halt even as lockdown orders around the world send binge-watching through the roof. (Photo by Valerie MACON / AFP)

TV stars picked out their favorite pajamas ahead of Sunday’s reinvented, pandemic-hit Emmys, which will see nominees accept prizes live from their homes, with dark superhero satire Watchmen tipped to dominate the night.

Hollywood’s first major COVID-era award show will look radically different to previous editions, with no red carpet and a host broadcasting from an empty theater in Los Angeles, which remains under strict lockdown.

Winners at the 72nd Emmys – the small-screen equivalent of the Oscars – have been sent cameras to hook up in their own living rooms, gardens, and even bedrooms.

They have also been encouraged to get creative with their acceptance speeches as well as locations, meaning even the show’s producers are in for a few surprises.

Jimmy Kimmel has been tasked with hosting the night.

The late night funnyman began presenting his own talk show from home months ago, and held together the notorious 2017 Oscars after a fiasco saw the wrong best picture winner announced.

As for the awards themselves, Watchmen leads the charge with a whopping 26 nominations, primarily in the limited series categories.

The timely graphic novel spin-off – which won rave reviews from critics and audiences alike – tackles historic US racism, police violence, and even mask-wearing.

“Watchmen speaks so specifically in so many unprecedented ways to the moment in which we’re living right now,” said Hill.

“I think people will probably get pretty tired of hearing Watchmen’s name getting called… it’s as much of a lock as we have right now.”

The prestigious drama series categories promise to be more closely contested this year than in recent editions – HBO’s Emmys record-breaking Game of Thrones has finally mounted a dragon and soared off to Westeros.

“It’s a relief for HBO that they have ‘Succession’ hitting at the right time,” said Hammond.

The dark portrait of a powerful Murdoch-esque family’s wrangling for control of a dynastic media empire has amassed 18 nominations.

It is tied with Ozark, Jason Bateman’s crime saga set in the American heartland from Netflix, which despite landing a record 160 nominations this year is still desperate to win its first major series Emmy.

In the race for comedy honors, past winner The Marvelous Mrs Maisel – Amazon’s quirky tale of a 1950s housewife who becomes a standup comic – will battle sleeper hit “Schitt’s Creek.”

The latter, a Canadian comedy about a privileged family forced to live in a rundown motel, failed to earn a single nomination in its first four years, but gained attention by later airing on Netflix and signed off with a heartwarming final season.

Of the more than 100 acting nominations in the drama, comedy, limited series, and television movie categories this year, more than a third of them went to black actors – a new record

Aside from the awards themselves, the night will honor the career achievement of Tyler Perry.

The African-American entertainment mogul has championed greater diversity in Hollywood, and this year paid funeral costs for black victims of police violence including George Floyd.

The theme of tackling racism is expected to feature prominently throughout the night.

Many stars in famously liberal Hollywood are likely to have a wary eye on President Donald Trump’s re-election bid – and to express grief over the death of US Supreme Court Justice Ruth Bader Ginsburg.

And then of course there’s the pandemic itself to address.

“Even if Sunday night is a complete disaster, it’s at least going to be an interesting disaster,” said Hill.