If we enjoy ‘Squid Game,’ does that make us cruel VIPs too? If you’ve been online these past few weeks, you’re more likely to have heard of Squid Game. It’s almost impossible to avoid: Tiktoks, tweets, reaction videos, memes, subreddits, Instagram filters, and recreations of the show on Minecraft and in real life (though far less violent, with a far smaller prize) have sprouted almost overnight. The survival drama series has become Netflix’s most-watched program to date, with more than 142 million views in its first four weeks.

The substance of the series itself isn’t groundbreaking by any means. Squid Game is part of a long line of survival game-centered films and TV shows that have preyed on our proclivity for fictionalized suffering: from the Japanese manga-turned-visual media Battle Royale, Liar Game, Gambling Apocalypse: Kaiji, and even Alice in Borderland, to American box-office blockbusters like The Hunger Games and even cult classics like The Cube.

Like its predecessors, Squid Game serves as an overt commentary on capitalism and the wealth disparity that forces people into an extreme competition to survive. Much has been written about the socioeconomic landscape of Korea and the history that has inspired each of the character’s backgrounds, such as the Ssangyong Motor Strike that inspired Gi-hun’s (Lee Jung-jae) backstory. Whereas most survival games illustrate what society can be in the future, Squid Game comments on what society already is. 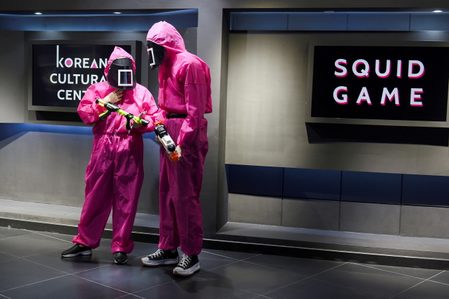 In the process of critiquing modern-day capitalism, Squid Game shows how it co-opts its favorite friends: entertainment and the legal system. People often forget the crucial link between capital and spectatorship: the gamification of violence is possible not only because there are people who are willing to participate in the games but also because there are people, powerful ones, willing to watch and pay. Reality television and competition-based reality shows have long taken advantage of individual weaknesses, commodified an individual’s personal life, and manipulated narratives in service of the grander spectacle depicted onscreen.

Squid Game adopts many components of reality television and competition-based reality shows. In other survival shows such as The Hunger Games and Battle Royale, participants are selected on the basis of chance and then forced into an ethical clusterfuck – a moral free-for-all where their humanity is tested. On the other hand, Squid Game sees their contestants recruited into the games and “voluntarily” entering (and re-entering) the system.

In the second episode (“Hell”), players are allowed to exercise the third clause of the “Player Consent Form”: the games can be terminated by a majority vote. Though it enables the living to leave, only the dead will be compensated; creating a struggle between players who are in more dire situations than others. The opt-in and opt-out system is one of the most unique aspects of the series and the opportunity to leave is presented at every juncture, giving the appearance that the game respects individual agency, autonomy, and consent.

But soon enough after they leave, they are faced again with the harsh reality of living: medical bills, gambling debts, bad investments, salary delays, and betrayals from brokers. By highlighting their social realities, it emphasizes the social and structural pressures that keep them coming back to the games, that often override individual autonomy and readily funnel participants back into the death-dealing systems they’ve managed to escape. The identity of Squid Game exists, thrives, and depends upon the existing inequalities, maintaining an illusion that it is doing good by providing a level playing field, enveloping its players with a false sense of benevolence.

The predictability that is often used to dismiss the series is a clear indication of the show’s reality television origins: rigging the favorite or underdog to win, and making no attempt to conceal its nature from the players, as seen in how its walls contain their fates, much like in Midsommar. From the second episode itself, many of the deaths are foreshadowed by their actions, and this predictability and formula can also be seen as one of the series’ strengths: knowing what happens to characters we invest in simultaneously cushions the emotional blow of these deaths while making these more devastating, a cruel reminder of the proximity of this world to ours.

The end of Squid Game has polarized its fans: with some arguing that Gi-hun (Lee Jung-jae) shouldn’t have won over Sang-woo (Park Hae-soo) and that the North Korean defector Sae-byeok (Jung Ho-yeon) deserved the win instead of a death that seemed more like a deus ex machina. While this radical framework does feel like a more powerful message (and one which I was also rooting for despite knowing how it would likely end), it also defeats the purpose of the series: if anyone who needed the money won, wouldn’t it justify the existence of the game?

After some reflection, an uneasy idea begins to settle in: that our viewership of Squid Game makes us VIPs too — sitting comfortably from our own homes, placing bets on who will win, enjoying as we watch people perform pain and pleasure, demanding another round of killings through a second season. It is a reality difficult to deal with because it makes us complicit to what the show is critiquing. Of course, the blame shouldn’t be put on us as individuals only. There are larger, more powerful, more abstract structures that are at play. But on a personal level, it must be asked: why is it so easy to view suffering that is fictionalized, but so difficult to watch and discuss suffering that is, for a lack of a better term, real?

Up for a challenge? Where to try the dalgona candy from ‘Squid Game’ in PH In Leslie Jamison’s The Empathy Exams, she ponders on the nature of spectatorship and empathy in the context of documentary filmmaking. She narrates her experience watching documentaries about the West Memphis Three, a trio of prepubescent boys who were convicted of murder as part of a satanic ritual who were later freed after having served 18 years upon Alford pleas. Filmmakers, she says, are “curators of outrage; they entrust you with an injustice that it hurts to hold. So you figure out somewhere to put it.”

Jamison continues, saying: “We like who we become in response to injustice: it makes it easy to choose a side. Our capacity to care, to get angry, is called forth like some muscle we weren’t entirely aware we had.”

We might not want to admit it, but we like who we are when we watch Squid Game. But as South Korean workers utilize the imagery of the show to protest the economic turmoil and debt crisis from which the story is drawn from, what do we do then? Squid Game makes us believe we are better, more empathetic humans. But what happens if we aren’t? – Rappler.com