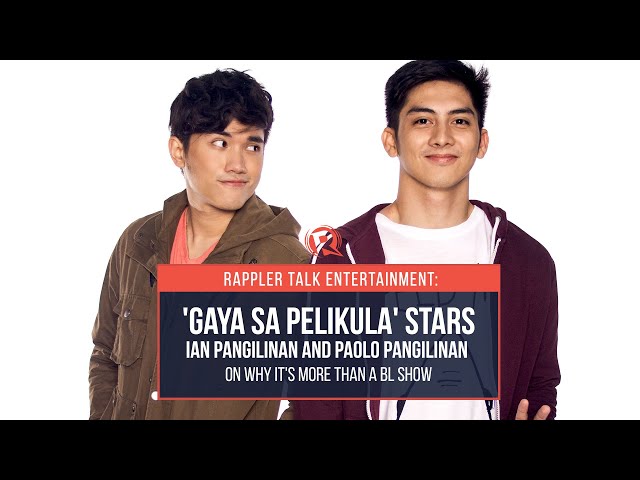 Facebook Twitter Copy URL
Copied
The stars of the newest BL to hit the screens talk about taking back LGBTQ+ narratives... and play a game of 'Sino ang Pinaka...'

Even before Gaya sa Pelikula premiered on September 25, Ian Pangilinan and Paolo Pangilinan were already making their way into the hearts of the growing Pinoy BL fanbase.

It’s not difficult to see why – the pair make the perfect leads for a BL show: good-looking, charming, and with an intense chemistry that jumps off the screen. But perhaps more than that, the two also took to heart the show’s theme of taking back LGBTQ+ stories, and putting out narratives that empower the community.

In this interview with Rappler reporter Amanda Lago, Ian and Paolo talk about how they prepared to star in a show that would be representing an underrepresented community, and also about why it’s important for artists to not just make art, but also fight for a cause.

It’s not all serious though – they also share behind-the-scenes stories about auditions and filming in quarantine, go into their characters Karl and Vlad, and even play a game of “Sino Ang Pinaka…” towards the end of the talk!

Watch the interview on Rappler on Sunday, September 27, and catch the first episode of Gaya sa Pelikula on the Globe Studios YouTube channel. – Rappler.com