MANILA, Philippines – Black Mirror is one of the greatest shows on television – or rather, on the internet – right now. But anyone who’s seen it will know just how soul-crushing the show can be. Since the first season dropped almost 7 years ago, we’ve encountered a person “blocked” in real space, visited a society obsessed with social media ratings, and seen a woman’s memory wiped clean before undergoing daily torture in a so-called justice park. And don’t forget that one episode where the prime minister of the United Kingdom is forced into having sex with a pig.

One of the show’s harshest conceits is depriving the audience of the emotional release that would make a program this bleak otherwise bearable – or fun, even. (Notable exceptions include San Junipero, the Emmy Award-winning episode from Season 3.)

Season 4 changes that, for the most part. While Black Mirror’s creator and co-showrunner Charlie Brooker is still spinning cautionary tales of humanity bowing to technology, these new episodes give us a bit more catharsis. Hell, there’s even a post-apocalyptic action-thriller episode (Metalhead) that would make James Cameron and Linda Hamilton happy. Metalhead is the perfect thematic anchor for this season because it shows (in stark grayscale) humanity fighting back. The fight may not always be won, but that struggle validates our humanity. But we’re getting ahead of ourselves. Let’s start with the first episode.

The season’s first episode is an oddball homage to Star Trek and early 20th century pulps. It features Robert Daly, a gifted coder and co-founder of Infinity, an online multiplayer game that lets users experience simulated reality via neural connections. Unpopular and awkward, even by programmer’s standards, Daly plugs in every night to a private version of Infinity which recreates the USS Callister, a ship from Space Fleet, his favorite sci fi franchise. 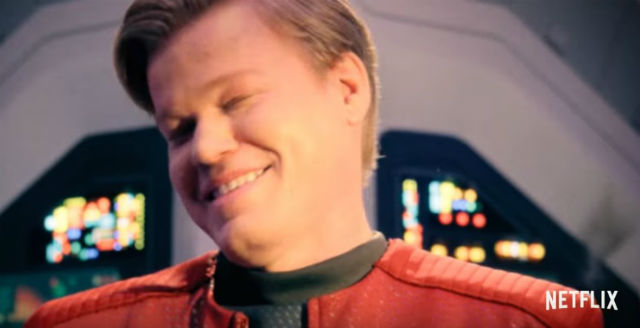 The show's first episode has a tribute to 'Star Trek'

Aboard the Callister, Daly is captain, of course, and he lords over the ship’s crew, which are fully sentient versions of colleagues he feels slighted by. The digital versions of his crew were created by secretly collecting DNA samples from their real-world counterparts, which tells us Daly isn’t just shy, he’s an actual a psychopath.

The digital crew members also happen to be self-aware and have attempted to oust Daly numerous times. They’ve been pretty much given up when Nanette Cole, a new hire in the real world, joins the crew. Daly gets his just desserts, and it’s all a great jab not just at impersonal technology, but to the sometimes smug, self-absorbed assholes who create it.

The episode shows us helicopter parenting Black Mirror-style. It introduces Marie, a single mother who briefly loses her daughter Sara, and as a result becomes overly protective of her. Marie agrees to let Sara be a part of the human trials for Arkangel, a chip that is implanted in the child’s brain. Arkangel gives Marie a real-time feed of what her child is seeing, GPS tracking, and various physical read-outs, including measurements of the stress hormone, cortisol. It’s the super-nanny cam. 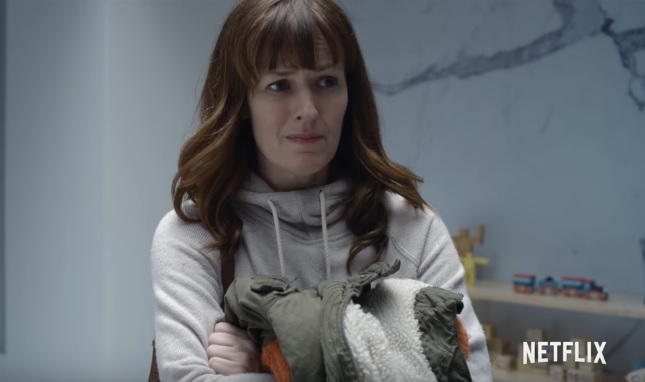 When Sara’s cortisol level spikes, such as when barked at by a large dog, Arkangel can automatically pixelate the object causing the stress. It’s handy for blocking aggressive dogs and NSFW videos, but the inability to perceive pain in others causes some emotional problems with Sara. Marie eventually stores the Arkangel tablet in the attic, only to switch it on again after she catches the now-teenaged Sara lying about her evening plans. Marie sees her daughter having sex – or rather, she sees the boy Sara is having sex with through her daughter’s eyes.

Marie manages to shrug off the incident. But on another instance, she opens Arkangel and discovers Sara is snorting cocaine. A violent confrontation between mother and daughter later erupts, and Sara eventually leaves her mother. These scenes were disconcerting, but it was heartening to see a character in Black Mirror stand up to tech-bolstered authority.

Although Black Mirror’s episodes don’t exist on a strict timeline (unlike, say, Star Wars and the MCU), it’s clear that all of them take place in a shared universe. You can tell by the technology they use. "Crocodile" features a memory-playback device, which could share the same tech as "Arkangel," which in turn has the same user interface as the “grain” device shown in "The Entire History of You" from way back in the first season.

On its surface, "Crocodile" looks like a pretty basic morality play. A young couple, after a drunken night out, accidentally runs over a bicycle rider. After some arguing, they dump the body into a river and agree to never talk about the incident. Fifteen years later, Mia is a successful architect, while Rob is still racked by guilt. Rob visits Mia in her hotel room and reveals that he plans to come clean, which spurs Mia to kill him. Outside, an automated pizza truck hits a pedestrian.

The B-plot follows Shazia, an insurance investigator, as she interviews various claimants. To back up their claims, Shazia hooks them up to a device that lets her view their memories. One of her assignments is to interview the man who got hit by a pizza truck. Viewing his memories, Shazia spots a bystander who could corroborate the man’s claims. Viewing the bystander’s memories, Shazia finds yet another witness to talk to.

Shazia’s and Mia’s paths finally cross when Shazia spots Mia peering out the hotel window in the memories of the recent witness. Shazia visits Mia and informs her that she’s required by law to submit to the memory viewing. Mia finally relents, and Shazia sees more than a man getting hit by a pizza truck. Mia kills Shazia, then to keep things airtight, goes to Shazia’s home and kills her husband, and finally, their baby. The police catch Mia by – I’m not making this up – replaying the memories of Shazia’s pet guinea pig. Of all the episodes in season 4, this one closely resembles previous seasons the most.

Amy and Frank are part of a dating system that gives couples a predetermined amount of time together. Couples meet in a cozy restaurant, but the constant presence of armed guards gives off a vaguely despotic vibe. Amy and Frank hit it off, but learn that they only have 12 hours together. The two are then shuffled around with various partners, to help the system gather information to eventually assign to each an “ultimate compatible one.” Amy and Frank are again paired, to their mutual delight. The happiness is short-lived, however, when Frank breaks a promise to not look at the amount of time they have. The system originally gave them 5 years, but because of the broken promise, the system is forced to recalibrate, eventually settling on 20 hours. They go on their system-mandated separate ways, but the scene has all the ingredients of a classic break-up.

It turns out, these relationships were just simulations run by a dating app as a means to test the compatibility of their real-world selves.

The sentience of the simulated versions of Amy and Frank isn’t established, but they could very well be. After several unsatisfying relationships Digital Amy and Digital Frank decide to defy the system. On the eve of them being paired with a different “ultimate compatible other,” they attempt to escape together by climbing a giant perimeter wall that surrounds the area. The app considers this shared defiance a sign of compatibility, and the episode ends with the app pairing Amy and Frank in the real world.

"Metalhead" is one of the simpler episodes in this season. We find a trio of scavengers (or survivors) driving through a post-apocalyptic landscape. The group reaches a warehouse and two members break in. They’re looking to load up on unspecified supplies, but while unpacking crates, they trigger a robotic guard dog. The dog releases a tiny explosive that spreads tracking shrapnel, then shoots one of the men. 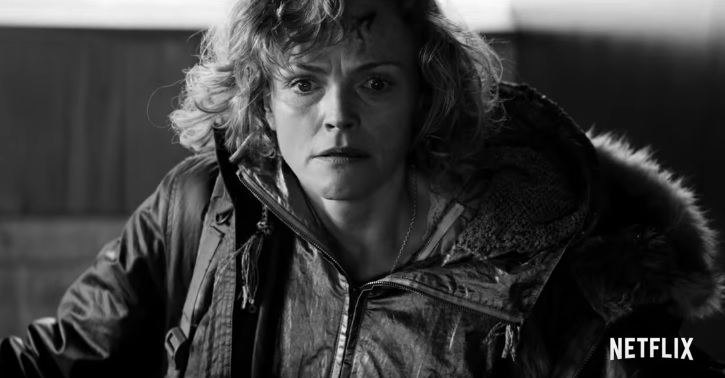 The show also has thriller and dark elements

Bella, ostensibly the leader of the trio, escapes but sees her last companion also get killed by the dog. What follows are straightforward pursuit sequences that are reminiscent of The Hunger Games.

The dog resembles those freaky headless robots being tested by Boston Dynamics at present. It’s less AIBO, and more devil dog bred by Skynet. And Bella, who slices herself open to yank out those trackers, is our Sarah Connor. It’s satisfying to see Bella get a couple of direct shotgun blasts at the dog, but right before the dog shuts down, it launches another one of those explosive trackers. Having come to terms with the inevitable, Bella presumably commits suicide – better to die by one’s own hands than be killed by one of these things. The camera pans across the landscape to show numerous dogs traversing the landscape.

Black Mirror may be highbrow and high-tech, but the show is still a pulpy examination of sex, fear, jealousy, and longing. This all becomes even more apparent in "Black Museum," the final episode of the season. The titular museum is a collection of “criminological artefacts,” some of which received their ghastly reputation in previous episodes (The DNA-scanning device Robert Daly used to digitally clone his officemates are here, as well as the bathtub Shazia’s husband was murdered in).

The museum’s proprietor, Rolo Haynes, is equal parts scholarly curator and carnival barker. He regales a girl named Nish with stories that come across as mini-Black Mirror episodes. There’s the story of Dr. Peter Dawson, a physician who uses a neurological implant to directly feel his patients’ pain, thereby allowing him to make better-informed diagnoses. He later becomes addicted to the pain, and falls into a downward spiral of sadism and masochism. Then there’s Jack, the man who uploaded the consciousness of his comatose wife Carrie into his own head. It was good at first, but having a second voice in his head eventually wore Jack down. His medical liaison, who turns out to be Haynes, eventually convinces Jack to upload Carrie into a teddy bear, which is displayed in the museum.

Haynes saved his best piece for last – a sentient digital copy of a condemned criminal. Visitors could flip the switch on the electric chair, forcing the man to relive his agonizing death over and over. It turns out Nish is the criminal’s daughter. She overpowers Haynes, steals his consciousness, and uploads it into her father’s cell. She finally relieves her father of his endless torment and sets fire to the museum.

She flips off her shades, and rides her vintage sports car into the (metaphorical) sunset. "Black Museum" is an effective audit of the show in its entirety, and by literally burning down the house that kept its relics, opens up the possibility for even greater bleakness.