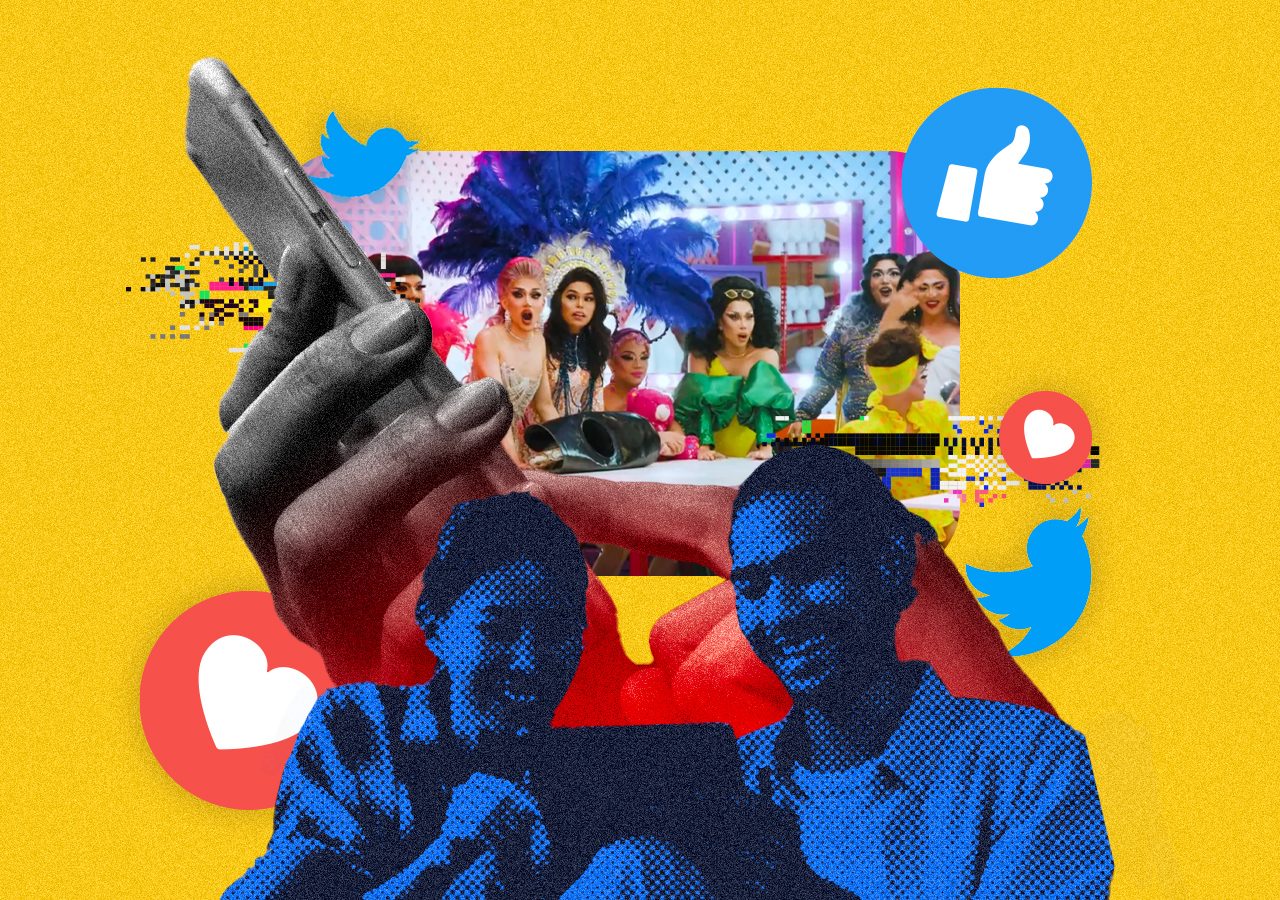 MANILA, Philippines – The engines have started and the queens are fully tucked in for the biggest drag competition in the country! Drag Race Philippines aired its first-ever episode on August 17, 2022, and it has been one hell of a ride, to say the least.

Drag Race Philippines is the Filipino version of the famous reality competition show RuPaul’s Drag Race, which brought the world of drag out of the clubs and theaters and into global screens and stages. RuPaul’s Drag Race is produced and hosted by American drag queen RuPaul Charles, and it was first introduced in 2009. It now has 14 seasons and has various international franchises in the UK, Australia, Thailand, and more.

Drag Race Philippines follows the same mechanics as RuPaul’s Drag Race, but it adds a wildly and uniquely Filipino flavor to the franchise. These are seen in terms of performances, drag inspirations, and humor, such as runway themes like “Shake, Rattle, and Rampa” where they showcase different Filipino urban legends, and even the incorporation of familial relationships – a huge component of Filipino values – present in the form of video greetings or old photos.

The reality competition has had a lot of recognition since it first premiered. Outside the show proper, the queens even have their own popularity race on Twitter as well. We’re here to take a look at just how many “con-drag-ulations” the show and the queens have gotten from online drag communities and fans all over the world.

On August 17, 2021, exactly a year before the official premiere of Drag Race Philippines, the local drag scene was graced with the iconic “she done already done had herses” mail from RuPaul. She announced a casting call for racers who wanted to become the next drag superstar of the Philippines.

Fans were pumped about this announcement and quickly flooded Twitter with tweets about how excited they were for the show. They were even suggesting hosts, judges, and runway themes for an unapologetically Pinoy Drag Race.

The die-hard fans of the franchise already had ideas for the show’s famous segments, like the iconic “Snatch Game” where queens impersonate known personalities and entertain the judges, or the “Rusical” where the singing, acting, and dancing talents of the contestants get tested.

Mamwa Pao or Paolo Ballesteros, a well-known actor, comedian, and drag icon in the country, was selected as the host of the franchise. One by one, the main judges were later introduced, revealing big names like trans woman and known impersonator KaladKaren as well as Jiggly Caliente, a Ru girl from RuPaul’s Drag Race season 4 and All Stars season 6.

With such a grand entrance, Drag Race Philippines certainly lived up to the hype as it garnered even more popularity once the show officially premiered.

To get a broader view of the online sensation, Rappler collected a sample of over 200,000 tweets between January 4, 2021, and September 6, 2022. This period covers up to the show’s fourth episode, “OPM Divas: The Rusical.”

The steep increase in the number of tweets mentioning Drag Race Philippines shows that excitement built up the month before the show’s pilot episode was released. The number of Twitter mentions quickly jumped to over 150,000 by August 2022.

Stan Twitter did not hold back on the Drag Race Philippines razzmatazz, as users online supported their own bets, shared witty and crazy memes, and posted all-out critiques about the runway looks.

Fans of RuPaul’s Drag Race outside the Philippines also hyped up the country’s franchise, and talked about wanting to learn the Filipino language or understand the show’s references better.

Aside from the Twitter buzz, there was a sharp increase in the number of likes and followers of the official Drag Race Philippines Facebook page when the show was first announced. There was an even bigger spike in likes and followers after the competing queens were first revealed, and these metrics skyrocketed to more than 42,000 likes and 62,000 followers by September 2022.

Bring back my Maria Claras!

Among the things that make Drag Race Philippines the marvel that it is are its top-notch queens with their looks, humor, talent, and wit.

Rappler scanned tweets mentioning the queens to determine which contestants were most talked about on the social media platform. We considered tweets that mentioned the contestants either in full (e.g. Precious Paula Nicole) or in part (e.g. Precious). From the get-go, the fanbases of the 12 queens were excited to show their support for their bets. Before the first episode premiered, Brigiding, one of the powerhouses in the local drag scene, was the most talked about queen on Twitter, with 25.72% of tweets mentioning her. Following closely was Eva Le Queen, accounting for 25.47% of the mentions. Eva is a resident queen at Nectar Nightclub, one of the most famous gay bars in the country.

Next to them were Precious Paula Nicole, a star performer at O Bar, the premiere drag club in the country, with 14.86% of tweets mentioning her. Xilhouete, one of the owners and the creative director of Nectar Nightclub, held 7.98% of the mentions.

As the show progressed, the rankings based on Twitter mentions have changed as well, along with all the drag and drama shown in the different episodes.

By the release of the first episode, Minty Fresh dominated both the online scene with 19.51% of the mentions and the Drag Race Philippines stage. Minty got the show’s first-ever Ru badge after stunning every judge with her original song-and-dance number for the Totally Impressive Talent Extravaganza or TITE challenge, as well as her take on the Filipiniana for the runway segment. She was also caught in a long-standing feud with Nectar performer Marina Summers and Brigiding, where she ended up saying the iconic “Baliw!” line.

The following weeks showed that Turing, another O Bar resident queen, took over the Twitter scene. She dominated Twitter mentions by the third episode of the show, accounting for 27.88% of the tweets, after her impressive performance at the girl group showdown to “Pop Off, Ate!” and her spooky tiktik runway look. She was later hailed as the winner of the episode.

Precious consistently garnered over 15% of mentions, this time because of her iconic runway look where she gave birth to three tiyanak baby dolls on stage. Meanwhile, Marina also began gaining traction as fans applauded her for keeping her composure despite the drama between her and Xilhouete, as shown in the Untucked episode.

By the fourth episode, Turing remained the most talked about queen, accounting for 23.77% of tweets, after she had to sashay away due to an underwhelming performance for “OPM Divas, The Rusical” and the pearl runway.

Precious also slowly gained more mentions, accounting for over 21% of tweets. This came after she won the Rusical challenge with her impersonation of Regine Velasquez-Alcasid, who joined the episode as a judge for the maxi-challenge. There were a lot of fans, however, who cried that this assignment was unfair as Precious already had a lot of experience impersonating Regine.

Eva came in third, accounting for 16% of tweets, after winning the Chinese garter mini-challenge. Fans were also amused by her casually sipping on her margarita amidst the drama during the Untucked episode.

Trends in Twitter mentions showed that there are two ways to get noticed by the fans of the show – you have to either be really good or really bad at the show’s challenges, or you have to get involved in some sort of drama or show that you’re an unbothered queen who prefers to watch chaos unfold from the sidelines.

More than the extravagant looks and the entertainment value of the show, Drag Race Philippines and the whole RuPaul’s Drag Race franchise always had a message to send: drag is political.

In between performances and getting ready, the Drag Race Philippines queens talked about what it was like growing up gay and feminine in the Philippines. The werk room is filled with stories of the queens hiding their identity just to conform to what was expected of them, and even stories of them getting beaten up in the past just for being gay.

(I studied in a Christian school and they really condemned being gay. They even used me as an example in front of the class. That is why I felt that there was something wrong with who I was.)

In the same episode, Gigi Era also burst into tears when she recalled how her childhood was filled with physical abuse because of her identity. “Sana wala nang nambubugbog ng mga batang bakla (I hope no one beats up gay children anymore),” she said.

These are just a few of the many social issues tackled on Drag Race Philippines. Conversations on body dysmorphia, self-love, working as an OFW, and more – all of which are lived experiences of many Filipinos, especially members of the LGBTQ+ community – are spotlighted through the experiences of the queens. In a way, the popularity of the show sheds light on the plethora of battles that we still have not won even in 2022. More than that, Drag Race Philippines gives younger generations role models whom they can look up to and feel represented by as members of the LGBTQ+ community who are thriving and celebrated.

In an interview by Wonder, Brigiding was asked about what makes Philippine drag culture unique, and she answered: “What makes Filipino drag unique is that in the Philippines, we’re still suppressed. Hindi pa rin tayo equal. (We’re still not treated as equals.) And I think that makes the drag queens and the LGBTQIA+ community more fired up to showcase to the world what we deserve, what we need, what this show can bring. Finally, you will see that we deserve everything. We deserve all the respect, all the love, all the appreciation, and this show will do that for us, for everyone.” – with reports from Dylan Salcedo/Rappler.com