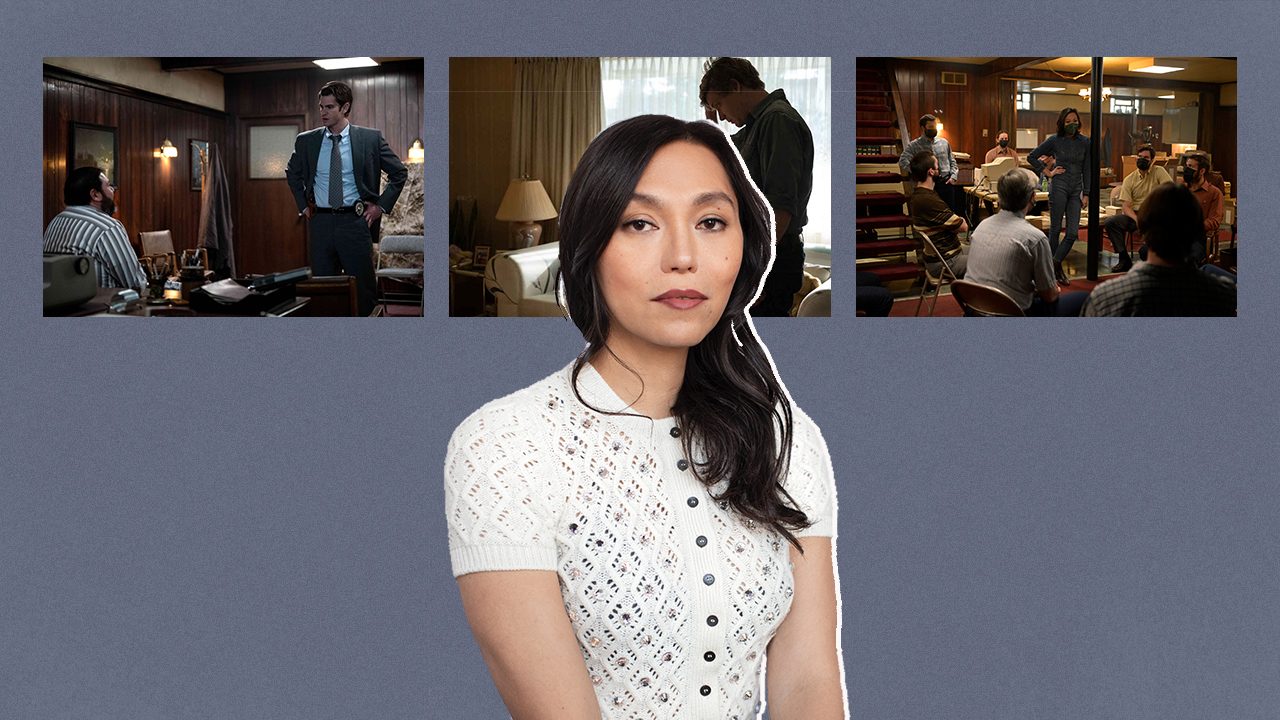 Facebook Twitter Copy URL
Copied
'As the director, I approach the scene like a conductor of an orchestra – Andrew Garfield being the latter – with my entire series as my score,' Isabel says

LOS ANGELES, USA – “Episode Six, titled ‘Revelation’ and directed by Isabel Sandoval, stands out as the emotional core of the entire show and Pyre’s character,” declared Flixist’s Sophia Schrock, in her review of Under the Banner of Heaven, starring Andrew Garfield as Jeb Pyre, a Mormon detective whose faith is tested when he investigates a brutal murder.

Schrock added about Garfield’s character in the seven-part TV miniseries, “Pyre is at a complete breaking point. He finds himself unwilling to continue believing in a religion that incites pain and suffering in so many of its members.”

Vulture critic Andy Andersen wrote, “My compliments to directors Isabel Sandoval and Thomas Schlamme, respectively, for aptly affirming the emotional core of this series in the final two episodes.”

“Decisively and explicitly framed within the procedural trappings of the detective genre, this episode and the previous one, ‘Revelation,’ feel like a strong, emotional whole — connecting the respective heart-of-darkness journeys of Jeb Pyre and Brenda Lafferty (Daisy Edgar-Jones) across time, space, and the universal ether of ‘violent faith’ (to echo the subtitle of Jon Krakauer’s source material).”

In her first time to direct a television episode, Isabel directs no less than Andrew Garfield, 2022 Golden Globe best actor in a musical or comedy for tick, tick..BOOM! The Cebu native, a pioneering transgender woman of color and immigrant filmmaker, megged the pivotal episode of Under the Banner of Heaven, a miniseries on FX on Hulu.

[Only IN Hollywood] Isabel Sandoval on her new film ‘Shangri-La,’ and next projects Based on the nonfiction book by Jon Krakauer and created by Dustin Lance Black, 2009 Oscar best original screenplay winner for Milk, Banner follows Andrew’s Jeb as he probes the killing of a Mormon mother and her baby that appears to implicate the Fundamentalist Church of Jesus Christ of Latter-Day Saints (FLDS Church).

The filmmaker behind the acclaimed Lingua Franca is the perfect choice to direct the penultimate episode, which is the emotional high point of the miniseries. Isabel elicits a stirring performance from Andrew, especially in a crucial scene inside a car that is the show’s highlight.

Isabel’s experience as an actor – she is unforgettable as Olivia in Lingua Franca – enhances her work as a director able to coax compelling performances from the cast.

When we met in Venice last year, Isabel described the next feature that she is developing: “I feel like the evolving aesthetic marries political impulse with a tone that is lyrical and sensuous. That is a creative direction that I want to push further with Tropical Gothic.” “The film is set in 16th century Philippines. It’s about this native princess who pretends to be obsessed by the spirit of her Spanish master’s dead wife in order to psychologically manipulate him to give back her property and farmland.”

The following are excerpts of our email interview with Isabel, whose other credits include Apparition and a short, Señoria.

Your direction of Andrew Garfield in the car/garage scene and the very powerful and emotional performance you elicited from him deservingly got a lot of attention and questions from the journalists who interviewed you about your episode. Andrew is a terrific actor, but what was your gut reaction seeing him up close, delivering that intense level of acting?

As a spectator, I can’t help but marvel at the tremendous emotional work that Andrew does, from take to take, the depths he had to plumb to get at something so real. It feels so raw and visceral that it transcends the artifice of cinema.

And that’s what makes it an emotional experience, how a feeling onscreen that’s emanating from an actor might be fake, but can unlock the memory of an actual painful experience and trigger a real emotional response from us as viewers. That’s what Andrew achieves in this scene.

As the director, I approach the scene like a conductor of an orchestra – Andrew being the latter – with my entire series as my score. The car scene is the emotional crescendo for Andrew’s character in the series, so it’s a matter of strategically dialing down his emotions in the dramatic scenes earlier on in the episode, so that his catharsis in the final scene feels well-earned and not indulgent or overblown.

Andrew asked for 30 minutes to prepare for that difficult scene. What surprised or struck you about both his acting instinct and technique?

I had a similar experience mounting such a raw, cathartic scene in my Philippine-set period drama Apparition about monastic nuns during Martial Law. That scene, featuring two of the country’s best actresses, had one of them breaking down in a four-minute dialogue-less long take.

I discussed the scene before the day we shot it, of course, but right before the scene, I gave them 20 to 30 minutes to emotionally prepare. It was the same way with Andrew, who knows the character like the back of his hand, having meticulously researched and inhabited him for months.

While I would give Andrew a few notes on scenes about his spiritual crisis earlier on in the episode, we had a tacit, intuitive understanding of how the car scene would play. As I do with my own features, I let the emotions play out as long as they need to.

Andrew knew that I would know when to call “cut.” When he came to set after half an hour, we were ready to roll. We had a total of four takes, and we’d take a few minutes’ break after each one.

With those four takes, we had some incredible footage to sculpt the final scene dramatically. The one note I gave Andrew for that scene had to do with timing specific beats.

Episode six was also crucial for Sam Worthington and Daisy Edgar-Jones as Ron Lafferty and Brenda Lafferty, respectively. What were your conversations like with them to hash out their scenes?

Like Andrew, Daisy is very receptive to notes. The more precise and specific you are about the tone, intensity, or timing of an emotional beat, the more intricately she can calibrate the grace notes in her performance. She’s both intuitive and a pro at acting for the camera.

Sam likes to experiment and tries out ideas during takes as a way to find the scene emotionally. It’s like going on an emotional voyage with Sam, only the destination is deep within him.

It has really allowed him to tap into something richer, more surprising and vulnerable in his performance. It’s especially critical in my episode, where Ron’s life essentially falls apart and he hits rock bottom.

My way of directing Sam, as with Andrew, is to step back and give him the space to trust his instincts and go where they need to emotionally. Our dramatic sensibilities are aligned and we’ll know instinctively in the moment if it’s a good take and if it feels honest.

Sam did this one extraordinary take at the snowy mountain. Ron was tearing up, laying his soul bare – and Sam and I couldn’t help smiling after I called cut.

And how did reading the script and directing that episode stir up your own thoughts and feelings about faith and the Church?

I’d like to think that my Catholic education growing up in the Philippines has somehow managed to hone my critical faculties when dealing with my faith and the Church as a fundamentally human and therefore imperfect and fallible institution. A glimpse into its history shows the blood on its hands, the abuses and atrocities over the centuries, and its role in colonization particularly during the Middle Ages.

It’s this same trenchant, clear-eyed perspective that I bring to Banner about the church – acknowledging its virtues without sugarcoating its evils – and how this leads to dissonance and ambivalence about our faith.

How significant is it for you, as a trans woman and a minority director, to be given an opportunity to direct an episode and tell a story that’s not confined to your background and community?

Know that Groucho Marx quote, “I refuse to join any club that would have me as a member?” Of course, I think it’s wonderful that I get to make art about my identity and community (e.g. Lingua Franca) but it can also be a double-edged sword and pigeonhole you in the eyes of Hollywood.

As it is with my art and the choices I make in my career, I like to break the rules, stir things up, and do something surprising: inhabit another person’s skin – one whose background is radically different from mine – and prove that cinema is an empathetic gesture.

In my particular case as a minority director, I bring a different kind of emotionality to the proceedings, compassion and sensitivity to feelings of vulnerability and loss that might not be as palpable from a filmmaker who has mostly lived a life of privilege.

What did you learn from working and collaborating with Dustin Lance Black?

Lance was incredibly supportive from day one when I shadowed him directing an earlier episode of Banner. He took a chance on me despite never having done TV before and wholeheartedly believed that I could take on a show of this ambition and pedigree and that made a world of difference to me.

I felt free to be genuinely creative within the tonal and visual parameters of the show, which allowed me to make the work that I did. Lance is exacting, he knows what he wants, but he is calm and fun to work with.

I’d like to think he wasn’t just my showrunner but a mentor and friend. I can never thank Lance enough for not only this directing opportunity but for making it as rewarding and empowering as it ended up being.

Now that you have directed a television episode, what insights did you gain? Is directing for TV something you’d like to do more?

Making my films can be so all-consuming and taxing for me since it’s my vision and I likely take on multiple creative roles to ensure I execute my vision. I had imagined that directing TV – if you’re not directing the pilot or showrunning – feels like a respite. It is creatively rewarding in its own way.

If you’re not directing the pilot, you have to strike the delicate balance of coming up with an episode that feels tonally and visually of a piece with the rest of the show while also making it feel singularly yours. I’m just delighted that this, my first-ever TV episode, was a perfect match for my dramatic sensibility – introspective characters grappling with emotional maelstroms!

The episode works as well as it does because these are themes and motifs I specialize in that I could practically do them in my sleep. (Half-kidding.) Seriously, it’s a matter of choosing your TV projects well – making sure they’re up to my alley artistically.

I’m in between a few TV projects that I should be able to talk about more openly in time as well as developing my next and most ambitious feature, Tropical Gothic. – Rappler.com

[Only IN Hollywood] Back to ‘Westworld’ with Ed, Tessa, Angela, Jeffrey, and Luke