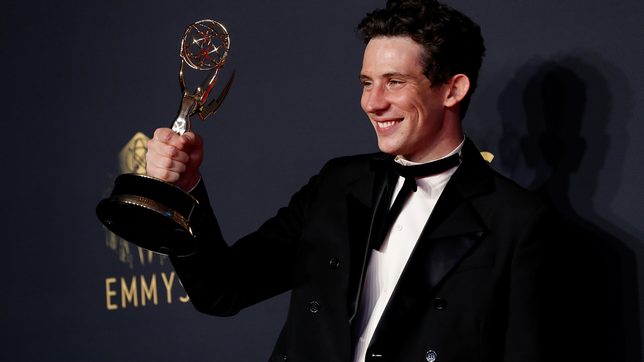 BEST ACTOR FOR DRAMA. Josh O'Connor poses with his trophy at the 73rd Emmy Awards in Los Angeles, USA on September 19, 2021.

Netflix won big at the 73rd Emmy Awards on Monday, September 20 (Sunday, September 19 in the USA) with its original series The Crown and Queen’s Gambit received 11 awards each.

Only O’Connor was present at the awarding ceremony in Los Angeles, USA, but Colman and Anderson both accepted their awards from London, where the rest of the cast gathered.

“Making The Crown has been the most rewarding two years of my life,” said O’Connor, who played Prince Charles in the period drama. He continued, “the cast and crew, our producers and all the brilliant directors, you made the show such a pleasure to be part of, thank you!”

O’Connor also called co-star Emma Corrin, who played Princess Diana in the series, a “force of nature.” He thanked his family and his girlfriend for “putting up with the chaos of this career that [he] feels incredibly privileged to be a part of.”

Meanwhile, Colman got emotional while accepting her first Emmy award. “Thank you very much, I’d have put money on that not happening. I don’t know what to say. This is amazing,” she said.

The actress portrayed Queen Elizabeth II in seasons three and four of the series. “What a lovely end to the most extraordinary journey with this family. I loved every second of it and I can’t wait to see what happens next,” she added.

Colman then wrapped up her speech by dedicating the win to her late father, “I wish my dad was here to see this. I lost my daddy during COVID and he would’ve loved all of this.”

Anderson won for her performance as Margaret Thatcher in the series. “I want to say thank you to Peter Morgan for creating this role, and to Netflix for everything. Everything,” she said.

The actress then dedicated her award to her manager Connie Frieberg “who believed in me when no else would.” “And believed in my talent when I didn’t even think that I had talent. Who always advised me to take the high road. Who was one of the best friends that I’ve ever had in my life,” she said.

Menzies, who was recognized for his portrayal of Prince Philip, was not present in the ceremony. Presenter Kerry Washington received the award on his behalf.

The Crown follows the British royal family across different time periods, from Queen Elizabeth and Prince Philip’s marriage to Princess Diana and Prince Charles’ highly publicized relationship – and its subsequent breakdown The royals are portrayed by a different cast every two seasons.

The fifth season for The Crown started filming in July 2021. A season five release date has yet to be announced.  – Rappler.com