What Harry and Meghan said in final Netflix episodes Facebook Twitter Copy URL
Copied
In the Netflix documentary, Harry and Meghan talk about their battles with the media and why they stepped down as working members of Britain's royal family

LONDON, United Kingdom – Netflix released the final three episodes of a documentary series from Britain’s Prince Harry and his wife Meghan on Thursday, December 15, setting out their battles with the media and why they stepped down as working members of Britain’s royal family.

Below are quotes and details from the series:

Harry on ties with his family

On a family meeting to discuss Harry’s royal departure:

“It was terrifying to have my brother scream and shout at me, and my father say things that just simply weren’t true, and my grandmother quietly sit there and sort of take it all in.”

On the royal household and the media:

“It is a dirty game. There’s leaking but there’s also planting of stories. So if the comms team want to be able to remove a negative story about their principal, they will trade and give you something about someone else’s principal. So the offices end up working against each other.

“William and I both saw what happened in our dad’s office and we made an agreement we would never let that happen to our office.”

“I would far rather get destroyed in the press than play along with this game, or this business of trading. To see my brother’s office copy the very same thing that we promised the two of us would never ever do, that was heartbreaking.”

On ties with William:

“The saddest part of it was this wedge created between myself and my brother so he is now on the institution side. Part of that, I get. That is his inheritance. To some extent that is already engrained in him, that part of his responsibility is the survivability and continuation of this institution.”

On his feelings towards his family:

“I felt really distant from the rest of my family, which was interesting because so much of how they operate is about what it looks like rather than what it feels like. And it looked cold, but it also felt cold.”

Meghan and Harry on the media and pressure

Meghan on royals and the media:

“You would just see it play out. Like a story about someone in the family would pop up for a minute and they would go: ‘got to make that go away’.

“But there is a real estate on a website home page, on a newspaper front cover, and something has to be filled in there about someone royal.”

“I believe my wife suffered a miscarriage because of what the Mail did,” he said, referring to the British tabloid newspaper. “I watched the whole thing.

“Now do we absolutely know that the miscarriage was caused by that? Of course we don’t, but bearing in mind the stress that that caused, the lack of sleep, and the timing of the pregnancy – how many weeks in she was, I can say from what I saw, that miscarriage was created by what they were trying to do to her.”

Harry on pressure to show off son Archie after birth:

“The amount of abuse we got… for not wanting to serve our child up on a silver platter was incredible.”

Harry on Meghan and a missed opportunity:

Harry on support in the family:

“The issue is when someone who’s marrying in, and should be a supporting act, is then stealing the limelight or doing the job better than the person who was born to do this. That upsets people, it shifts the balance.”

“I was like, all of this will stop if I’m not here. And that was the scariest thing about it because it was such a clear thinking.”

“I wanted to go somewhere to get help but I wasn’t allowed to, they were concerned about how that would look for the institution.” 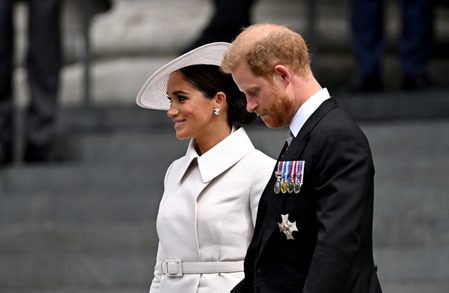