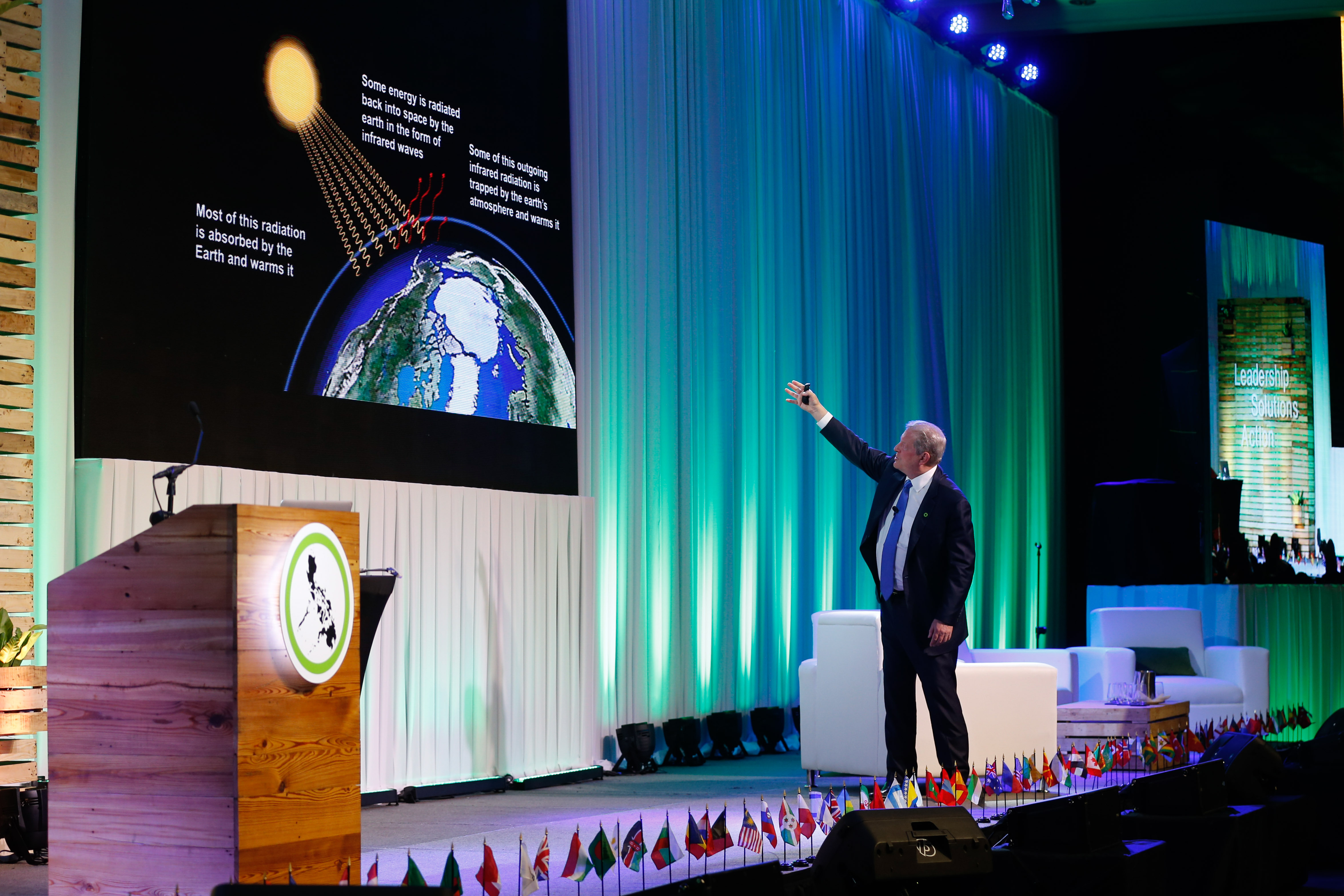 AN INCONVENIENT TRUTH. Former US Vice President and Climate Reality Project chair Al Gore the latest version of his An Inconvenient Truth presentation that sparked a global movement 10 years ago. Gore is in Manila, Philippines to host the Climate Reality Leadership Corps on March 14-16, 2016.

MANILA, Philippines – If President Benigno Aquino III were in the audience, he would have been inconvenienced by former US Vice President Al Gore’s presentation at the Climate Reality Leadership Corps training on Monday, March 14, in Manila.

In the updated version of the iconic presentation An Inconvenient Truth, which he introduced a decade ago, Gore noted that Philippines is still dependent on fossil fuels, one of the primary culprits of climate change.

Since the 2006 launch of his award-winning film An Inconvenient Truth, global awareness efforts on the climate crisis have gone a long way. In the film, Gore lent his voice to scientific facts on global warming, warning about its catastrophic effects if the amount of man-made greenhouse gases like carbon dioxide is not significantly cut. (READ: Al Gore visits Yolanda 'ground zero')

"In the thinking of many nations, the leadership has not caught up with the new reality,” Gore said,

"Carbon is the number one threat to the global economy,” warned Gore, who was awarded the 2007 Nobel Peace Prize for his efforts to build up awareness about climate change.

Coal use on upswing in PH

Senator Loren Legarda, chair of the Senate Committee on Climate Change, raised the same concern in her keynote speech at the 3-day leadership training.

"Philippine consumption of coal has been on the upswing, which increased by 27% between 2012 and 2014,”  Legarda said. (READ: The road to decarbonization)

The country needs an additional 13,167 megawatts of power capacity by 2030. More than half of this projected energy demand is expected to be generated from coal-fired power plants.

"Coal-fired power plants are the country’s dominant power technology because economically, they are widely available and easy to build,” Legarda said.

Challenging this argument usually given by governments and the coal industry, Legarda said that the Philippines should work towards achieving "a good energy mix where there is a bias for renewables.”

"This is 13 times more than the current installed capacity!”

Gore explained the “revolutionary change” that has been sweeping through the energy sector is because of significant progress in renewable energy sources.

"This is the biggest new investment opportunity in the history of world’s business,” he said.

As an example, Gore highlighted the cost of solar energy which has been decreasing at a rate of 10% every year for 30 years.

This contributed to dramatic increases in solar energy production, Gore said, suggesting that renewable energies are winning the financial argument. For instance, a 2010 projection expected the solar energy market to grow by only one gigawatt per year by 2010, but in 2015, the target was exceeded 58 times. In 2016, the same goal is expected to be surpassed 68 times, stressed Gore.

The landmark Paris Agreement forged in December 2015, believed to have put fossil fuels on the "wrong side” of history, is also expected to accelerate green energy growth. (READ: #COP21: Climate pact puts fossil fuels on 'wrong side' of history)

The pact, approved by the Philippines along with 194 other nations, aims at limiting global warming since the Industrial Revolution to well below 2 degrees Celsius and strives for an even more ambitious goal of 1.5 degrees Celsius.

Climate Change Commission member Frances Veronica Victorio, who listened to Gore’s speech, told Rappler that the Philippines is currently reviewing and firming up its commitment in Paris.

The country pledged to achieve a 70%-reduction in carbon emission by 2030 to be taken from taken from the energy, transport, waste, forestry, and industry sectors.

"We have to balance the environment initiatives (and) of course concerns about energy security, people’s access to energy,” Victorio said when asked about the country's continued dependence on coal energy despite the green energy progress. – Rappler.com