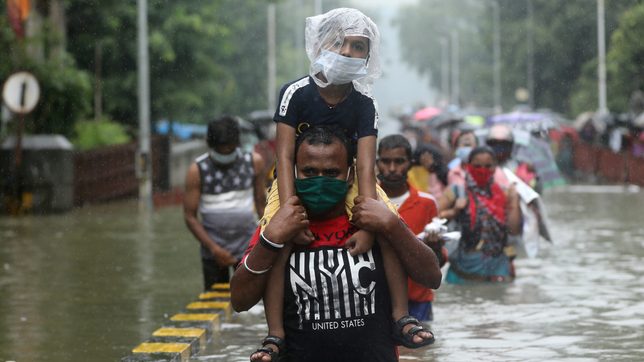 FLOODS. In this file photo, a man carries a child through a waterlogged road after heavy rainfall in Mumbai, India on September 23, 2020.

Facebook Twitter Copy URL
Copied
Four of the ten most expensive disasters in 2021 occurred in Asia, with the cost of flood and typhoons in the region adding up to $24 billion

KUALA LUMPUR, Malaysia – From deadly Hurricane Ida in the United States to devastating floods in China and Europe, climate change-fueled disasters have cost the world tens of billions of dollars in 2021, with both the poor and the rich hit hard, researchers said on Monday, December 27.

Floods, storms, and drought also killed and displaced millions of people across some of the world’s poorest regions, highlighting the rising injustice of impacts as the planet warms, humanitarian charity Christian Aid said in a report.

“The costs of climate change have been grave this year,” said Kat Kramer, climate policy lead at Christian Aid and author of “Counting the cost 2021: a year of climate breakdown.”

“While it was good to see some progress made at the (UN) COP26 summit, it is clear (we are) not on track to ensure a safe and prosperous world,” she added.

The report identified 15 of the most destructive climate disasters of the year, including 10 that each caused $1.5 billion or more in losses, with damage wrought by wild weather felt everywhere from Australia to India, South Sudan and Canada.

The financial and human costs of climate change are expected to keep soaring unless governments step up efforts to cut emissions and rein in global warming, the report said.

Growing calls from at-risk nations to establish a new fund to help cover climate-linked “loss and damage” in a hotter world must be a “global priority” in 2022, said Nushrat Chowdhury, Christian Aid’s climate justice advisor in Bangladesh.

Mohamed Adow, director of Power Shift Africa, a Nairobi-based think-tank, noted Africa had borne the brunt of some of the most devastating – if not the most expensive – impacts this year, from flooding to drought.

“(2022) needs to be the year we provide real financial support for those on the frontline of the crisis,” he added.

Here are some facts about the most costly disasters of 2021: