FIRE. People hold signs during a protest of Cornwall Climate Youth Alliance in partnership with Fridays for Future and Climate Live, at Gyllyngvase Beach, in Falmouth, on the sidelines of G7 summit in Cornwall, Britain, June 11, 2021.

Facebook Twitter Copy URL
Copied
However, an end to coal financing from the G7 could push Asian nations to turn to China for funding in a bid to boost energy security, warns academic Danny Marks

The G7 wealthy nations failed to go far enough at their weekend summit to halt the use of coal, but a pledge to phase out international funding for new coal power this year could help shift Asia’s policy on the dirty fuel, analysts said on Monday, June 14.

At a meeting in Britain, leaders of the powerful group of nations said they supported “a green revolution” and committed to stop by the end of 2021 new international funding for coal-fired plants that are not fitted with technology to reduce their planet-warming carbon emissions.

Green groups welcomed the move, which had been expected after it was recently agreed by environment ministers.

But climate campaigners criticized G7 leaders for not signing up to specific targets on ending the use of coal at home, and for offering insufficient new funding to help developing nations shift to renewable energy. “After decades of rising emissions, just a statement on limiting coal-fired power by G7 (via) direct funding can hardly be seen as going far enough,” said Shobhakar Dhakal, vice president for academic affairs at the Thailand-based Asian Institute of Technology.

The commitment would have been stronger with a clear timeline for phasing out fossil fuel infrastructure, added Dhakal, a professor in the department of energy, environment and climate change.

But it could nonetheless prove a “game-changer” in Asia-Pacific where coal remains a mainstay for power generation, he said in emailed comments.

The region consumed about 77% of the world’s coal in 2019, up from half 20 years ago, according to BP’s Statistical Review of World Energy.

The G7 decision to end new overseas coal funding will ratchet up pressure on Asian countries, from economic giants such as China to fast-developing economies like Bangladesh and Cambodia, to move away from coal, Dhakal said.

But others said Asian nations were unlikely to be swayed, given the G7 themselves spent more money on fossil fuel projects than clean energy between January 2020 and March 2021, according to academic Danny Marks.

“They won’t see it as a game-changer but merely just words,” said Marks, assistant professor of environmental politics and policy at Dublin City University in Ireland.

An end to coal financing from the G7 could push Asian nations to turn to China for funding in a bid to boost energy security, he added.

“This announcement could actually backfire against the G7’s aim and increase China’s growing influence in its own region,” he said. 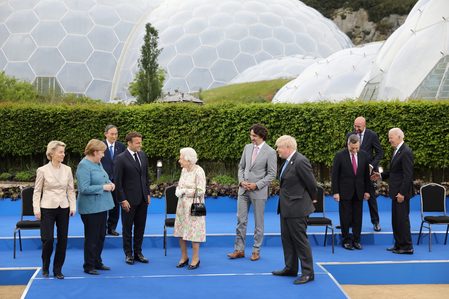 Governments and energy firms are being pushed to wean themselves off fossil fuels, whose continued production and use are viewed as a big threat to the 2015 Paris Agreement goals of capping global warming at “well below” 2 degrees Celsius and ideally 1.5C.

But that lower limit looks hard to reach partly because of new coal plants being built in Asia, the biggest energy-consuming region and largest growth market.

But Japan – a member of the G7 alongside the United States, Britain, Canada, France, Germany, and Italy – has been criticized for not making clear its intentions on coal, including its consideration of backing for new projects in Bangladesh. “If Japan has serious willpower to respond to climate change, it should be canceling all the planned projects,” said Sejong Youn, a director at Solutions for Our Climate, a Seoul-based nonprofit.

In a joint communique, the G7 leaders said donors planned to commit up to $2 billion in the coming year to a program led by the multilateral Climate Investment Funds to accelerate the transition away from coal.

The money, in the form of cheap loans, is expected to mobilize up to $10 billion in co-financing, including from the private sector, to support renewable energy deployment in developing and emerging economies, the statement added.

But Youn said new finance commitments at the G7 were not enough to turbo-charge a shift to renewables, leaving communities in Asia vulnerable to climate-linked disasters.

Other climate campaigners similarly urged G7 leaders to clarify how they would meet a promise by rich nations to raise $100 billion a year for poorer countries to adopt clean energy and adapt to a warmer planet, a goal on which they are lagging.

Only Germany and Canada offered new money at the weekend summit.

Nur Hidayati, executive director of the Jakarta-based Indonesian Forum for Environment, the country’s biggest green group, said this was “disappointing,” emphasizing that developed nations should pay more because of their historical emissions.

“For communities in Asia, we are experiencing these climate impacts because most governments are still relying on coal and fossil fuels, and they will not transition to clean energy without the economic incentives,” she said.

Clean energy investment in emerging and developing economies declined by 8% to less than $150 billion in 2020, with only a slight rebound expected in 2021, the International Energy Agency said in a report this month.

Investment in clean energy in those countries needs to rise by more than seven times, topping $1 trillion per year by 2030, to put the world on track for net-zero emissions by 2050, the Paris-based watchdog added.

Without stronger action, the G7 is continuing to turn a blind eye to the world’s poorest and most marginalized people who are hit hardest by climate change, from rising sea levels to stronger cyclones, said Philippine activist Mitzi Jonelle Tan.

“They are the major economies, yet all they do year after year is pledging, committing, promises and no actual action,” said Tan, 23, a convener of Youth Advocates for Climate Action Philippines.

“None of the world leaders – not our national leaders and not in the G7 – are prioritizing lives and the planet,” she told the Thomson Reuters Foundation. – Rappler.com