[IN PHOTOS] Ladurée in Manila: Price points, what to expect, top picks 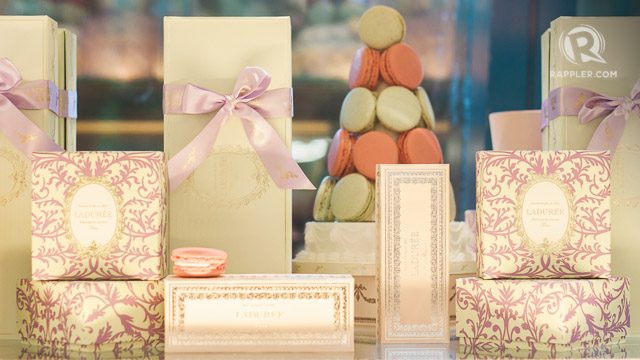 MANILA, PHILIPPINES – Manila fans have long clamored for the French pâtisserie Ladurée’s storied macarons. And at last, Ladurée has arrived. Louis Ernest Ladurée’s once humble bakery, built circa 1862 on rue Royale, is charged with history. After refurbishing into a pastry shop, it later became a pioneering tea salon during the Second French Empire. Needless to say, Ladurée has a tradition that has endeared itself to patrons throughout history.

Today, it is a global sweets empire that has expanded to neighboring European countries, the United States, the Middle East, and East and Southeast Asia. Ladurée’s first Philippine outpost, a takeaway boutique, has been set up at upscale 8 Rockwell in Makati. In the past, globetrotting Filipinos had to hoard the prized macarons in boxes, but now, that won’t be necessary.

Here’s a look at some of the sweets and merchandise that you can splurge on: Voilà, Ladurée’s claim to fame: its macarons: pastel-colored almond meringue biscuits filled with flavorful, creamy ganache. Each one has to have a subtly crisp and smooth shell but be satisfyingly chewy inside. No doubt, the dainty sweet is a work of genius. (READ: #FoodTrip: 4 desserts with a twist)

Its origins have been written deep within Western history books. However, Pierre Desfontaines, Ernest Ladurée’s grandson, made the macaron as we know it.

Some highlights: One, the pastel teal Marie-Antoinette (rose with anise) was especially crafted for Sofia Coppola’s 2006 cool and edgy biopic that featured the eponymous French queen. Two, the Strawberry Candy Guimauve (Marshmallow), is sort of a hybrid between a smore and an intensely fruity macaron. Most macaron purveyors rarely pull this off well, and Ladurée doesn’t even break a sweat. 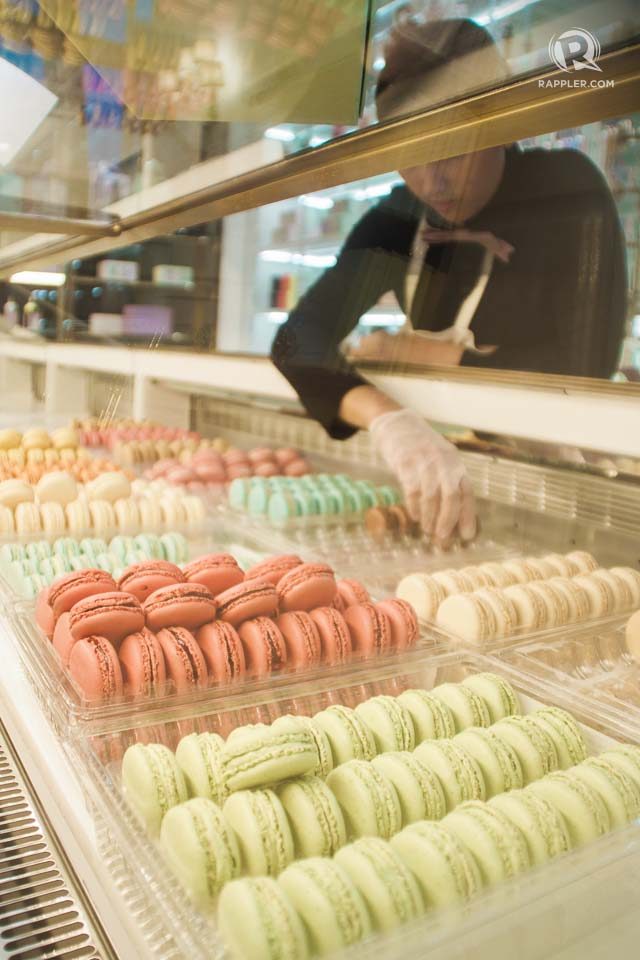 Flown in from the central bakery in Switzerland, these treats don’t go cheap at P150 a pop if you survey the local market. In spite of this, it’s still all the rage. For instance, in neighboring Singapore, the queues snaked too long; they reportedly broke a world record on opening day.

Ladurée also packages its star confections in fittingly chic gift boxes, as the macarons are meant for sharing. Boxes are priced at P1,200 (6 pieces) to P6,720 (40 pieces). Macarons are also available in towering pyramids (Pyramides) of 24 pieces and above (prices available upon request). In the months to come, look out for the limited edition boxes, as Ladurée has a stellar roster of collaborators on these: the likes of musician Pharrell Williams (with fashion retailer Colette, October 2014), super-brand Hello Kitty (April 2012), and fashion designers Christian Louboutin (September 2009) and John Galliano (October 2010).

As a luxurious treat for yourself on a blistering hot day, you can also pair your macarons with their corresponding flavors in ice creams and sorbets for P480 a cup (120 mL). * Flavors available at the Rockwell boutique for September 2015 Ladurée makes use of unique ingredients: passion fruit, Morello cherry, sesame seeds, rose, and more. The pâtisserie even infuses some of its premium chocolates with its own teas and fine liquors.

Take a box away, or give it to a special someone. From the Macaron Chocolates (assortment of 4, P1,070) to the Incomparables (12 chocolates, P2,040), you’ll appreciate Ladurée’s exquisite take on the all-time favorite. Find Ladurée delights perfect for breakfast or afternoon tea at home. A selection of honeys, jams, tea jellies, confits, and other delicacies are also available in the shop.

Smother an ordinary piece of toast or a lovely madeleine with any of their preserves (P820) from apricot, raspberry, blackcurrant, rhubarb, and more. Sweeten a cup of your favorite tea with honeys (P990) suckled from Fir and Acacia blossoms, or from a forest in Jura, Scotland or Burgundy, France. Perhaps indulge in the Caramel à Tartiner (Soft Caramel, P850), and spread it on whatever suits your fancy.

Or just give them as presents. Coming in stylish gift boxes, they’re great to give to dear ones. When pastry magnate David Holder acquired Ladurée in 1993, he sought to share the creations of this beloved maison with the world and build it into something bigger.

To complement its luxurious confections, Ladurée has created a merchandise collection, dubbed Les Secrets de Ladurée (The Secrets of Ladurée) – keepsakes that evoke its opulent shops or the charming side of Paris.

Find something cute and quirky (or useful): key rings and bag charms adorned with their iconic macaron, tote bags with Paris-inspired art, or even a pop-up book depicting the evolution of Ladurée’s shop design. Ladurée has always thrilled the senses with its fine sweets. But they have also crafted aromas to magically transport you to distant, beautiful places – thus, the Beauty Collection.

Take a whiff of exotic but comforting scents such as rice powder and black tea, over a nice book or whatever interests and relaxes you.

There’s the Mimosa perfume (like the champagne and citrus juice cocktail), or scents to remind you of the pastry shop with the Amandine and its sweet notes. Will you be visiting soon? Do you have your eye on those macarons? Let us know in the comments below.  – Rappler.com