Are you happy at work? Survey says 7 in 10 Pinoy employees satisfied with their jobs Facebook Twitter Copy URL
Copied
A new Jobstreet survey says 70% of employees are satisfied with their jobs. But what factors define job satisfaction?

MANILA, Philippines – Like any relationship, how a person feels about work changes over time. That job that once felt brand new and full of possibilities can feel tiresome and draining after months or years. What does job satisfaction mean to you? Are you happy with your work? What would make you say that it’s time to leave or change careers?

A new study from job resource website Jobstreet says that 7 in 10 or 70% of Filipino employees are “satisfied” with their jobs. But the study also shows that the factors that make up job satisfaction vary, often according to how far along one is in his career. Plus, employeers and empoyees often view job satisfaction differently.

The survey presented 5 common factors that come into play when it comes to job satisfaction:

Top satisfaction dirvers, though, vary accordng to where you are in your career. Salaries and benefits are the top driver for fresh grads, but for middle managers, relationships with their teams take the top spot. For managers and directors, the role itself is the top consideration for job satisfaction.

Not too happy at work? Take a look at these stories 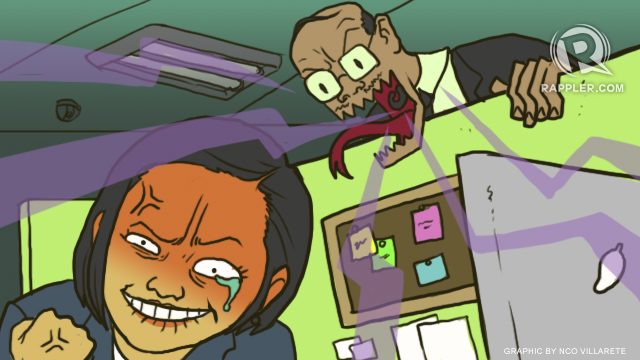 It fits right in with evolving changes as one embarks on a career – in the beginning, earning a spot in the job market, getting a foot in the door in a desired industry, and earning a decent salary are major considerations. Further along in one’s career, questions about making one’s mark, legacy, and overall impact arise, further highlighting job role over salary, which increases over the years.

If 70% of Filipinos are satisfied with their jobs, then 30% are not. The survey also examines reasons cited by people who have left jobs they weren’t happy with.

What made them leave? Just as in the satisfaction report, salaries remain a key factor across the board, with unsatisfying career growth close behind. But directors, or upper level management, cite a poor working environment as a top reason for leaving, followed by them receiving better offers.

Career change doesn’t seem too far off the mark for those unhappy in their work, as can be expected. Many of those dissatisfied said yes, they wanted to leave – 46% in the next 12 months.

How do employers feel about job satisfaction? It’s universally recognized as an important consideration when it comes to retention. But according to the study, only 77% measure job satisfaction (via exit interviews, large meetings, and regular surveys)  – the rest don’t have a metric to try and measure this.

Employers listed top reasons why they felt employees left, overall matching the factors cited by employees. But notably, job role was 5th on their list – a factor that ranked 2nd for employees.

The survey covers respondents who are at different phases in their careers. And while these job satisfaction factors are presented clearly in the results, it’s rarely as simple in a true-to-life situation.

Falling out of love with a job is normal – but how can one tell if it’s simply the afterglow of a new job wearing off or if there’s a prolonged dissatisfaction to be concerned about?

“It’s very important during the honeymoon stage…to understand what the job role is. If I do not know exactly what I’m supposed to be doing or what is expected of me, or if the expecation is not something that i really want to do then I have to decide and leave,” says Jobstreet country manager Philip Gioca.

“Or later on, I have to just acclimatize myself to ‘this is what I really need to do because this is what I really want to be doing on the first place.’ So that matching between what I can do, and I want to do and what the company needs to do, I need to pin it down as early as possible. So sometimes we will just coast along because the salary is there but later on it will crop up to you and say ok, I’m not really for this.”

Marketing director Yoda Buyco also weighed in, saying that the key difference between leaving the honeymoon phase and a different level of job dissatisfaction is familiarity with the role and the company.

Examining the ins and outs of the job is key, so is adjusting to the best of your abilities.

According to Jobstreet, the survey was conducted June to July 2015, with over 7500 participating respondents representating a mix of work roles, industries, and locations, with majority coming from Metro Manila. 269 employers or HR executives participated in the employer survey. – Rappler.com