MANILA, Philippines – If you missed last year’s Quezon City Food Festival along Maginhawa Street, you have another chance to eat to your heart’s content at this year’s event. (READ: Time to eat: 10 delicious finds at Maginhawa, QC food festival)

After the success of last year’s festival, establishments at Maginhawa, a popular street in Quezon City filled with many small and thriving restaurants, are opening their doors to the public once again for the whole-day festival.

Titled “Maginhawang Pasko,” this year’s festival is much bigger than last year’s, as there’s more planned for guests beyond the amazing food.

And after the problems they encountered last year – a shortage of food and very heavy traffic – the organizers have also taken what they’ve learned and applied it to this year’s plans. (READ: Lessons learned from Maginhawa QC’s 2014 food fest)

On December 4, Jay Adlao Block, president of the event organizer Outbound Asia, told media what we can expect at “Maginhawang Pasko.” 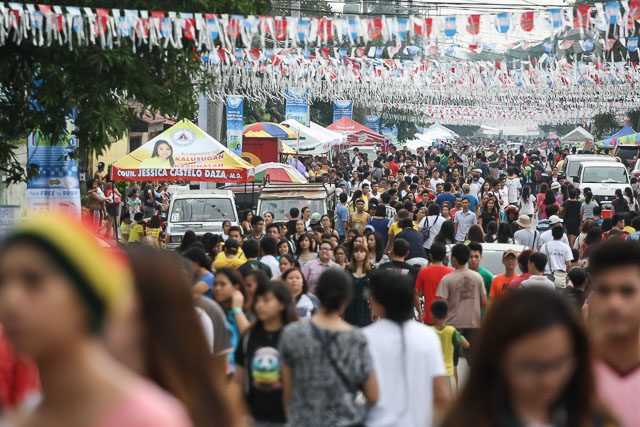 1. The festival will be held on December 12 from 9 am to 12 mn along Maginhawa Street, Quezon City.

Over 100 restaurants along Maginhawa and its adjacent streets will be open to serve guests, plus 200 other food concessionaires will also be at the event.

2. You can do some Christmas shopping at Maginhawang Pasko, too.

Because it’s a Christmas event, there will be 120 art, fashion, and music stalls selling their wares at Maginhawang Pasko. You won’t be breaking the bank either – these participating concessionaires pledged to offer special Christmas promos and affordable prices, according to the event’s press release.

3. The Itchyworms will perform at the Malingap Street stage at night.

Other musical guests are lined up too, with band True Faith performing at the Marilag Street Stage at 9:30 pm. The content of the other stage, located at Makadiyos Street, will be provided by The Sweet Spot owner Eric Calderon.

According to Jay on December 4, the other musical acts haven’t been finalized yet, but they are expecting musicians from the Elements Music Camp to be part of the lineup.

4. Aside from food, shopping, and music, this year’s QC Food Festival also has a host of contests for guests to participate in.

One of them is the “Singing Birit” competition, which anyone can sign up for in the morning. Auditions will be held throughout the day, culminating in a final show in the evening.

Maginhawa’s food establishments themselves will have a Christmas Decoration Contest, so the restaurants will look festive and colorful during the day, and beautifully lit up at night.

Bingo games, karaoke contests, and a cosplay competition will be held throughout the day.

5. Even though Maginhawang Pasko is a one-day event, Maginhawa Street will be closed from December 11 at 11 pm to December 13 at 1 am.

This is so that the organizers have time to set up before, and clean up afterwards. Jay mentioned though that the street will probably be closed for longer, depending on the time that everyone leaves.

If their cars are parked along the street, the residents of Maginhawa Street will be asked to move these cars to designated parking areas. The event organizers will be disseminating more information to the residents soon.

6. To avoid the traffic problems that were encountered during last year’s event, the organizers this year have provided a map of the area.

The map identifies drop-off points for guests and concessionaires, barricaded streets, guest parking areas, and which streets are one- or two-way. You can also find command posts for information, first-aid, police, and emergency response teams.

The drop-off points for concessionaires are also an answer to last year’s shortage of food. Establishments and food stalls now have areas where they can pick up supplies and restock their pantries. A more detailed version of the map will be up on their Facebook page soon.

7. The Quezon City Food Festival is being turned into an annual event.

Last year’s festival was held in celebration of Quezon City’s 75th anniversary. As such, Maginhawang Pasko is just the second year that the festival is being held, but Jay said that they’re hoping to hold the event every year from now on.

Will you be hitting up Maginhawang Pasko, the Quezon City Food Festival on December 12? Tell us in the comments! – Rappler.com