Tonight, the successor of Rolene Strauss will be crowned at the Beauty Crown Grand Theater in Sanya, China. And from among the 114 delegates vying for the crown, it’s not easy picking an outright winner ,given the field of lovely ladies who have individually shown their respective strengths to qualify as Miss World 2015.

But then again, a forecast needs to be made. And from where I stand, I can see strong potential in Miss Lebanon to perform well enough to outshine her pursuers for the big win. This lady has the profile of Miss World all over her – the beauty of face and heart with a far more realistic (doable, if you will) purpose to spread during a likely reign if she gets the judges’ nod.

There is a good number of other likely comers, too. And I am happy to note that Miss Philippines Hillarie Danielle Parungao is one of them. I am placing our very own in the Top 3, or second runner-up, if you will. Ahead of her, though, I am keeping Miss Poland Marta Palucka as First Princess because this Polish bet has been coming on stronger the past week. Hence, Lebanon, Poland, and the Philippines make up my winning troika.

There are 3 other contestants under my radar for top placements. They are Catharina Choi Nunes of Brazil, Hinarere Taputu of France, and Tess Alexander of Australia. If one of them gets the good break of shining brighter during the contest proceedings, then my highest players can be quickly altered to accommodate a switch.

Watch Valerie Abou Chacra and her Beauty With A Purpose Project. There’s nothing earthshaking about what she wants to accomplish, but you can feel the sincerity and love in her heart for the children, coming from a devastating family crisis that further strengthened the members’ unit. No frills, just plain honest-to-goodness strength of character with no excessively dreamy ambitions to change the world in one year.

And just to complete a Top 10, I will add Anyela Galante of Venezuela, Lu Yuan of the People’s Republic of China, Aditi Arya of India, and Maria Alejandra Lopez of Colombia to the mix. 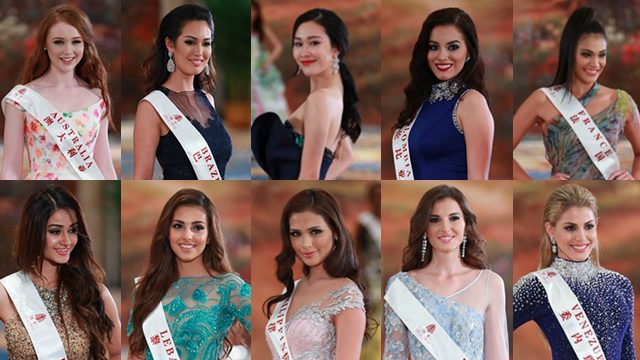 Let’s see who is destined to become Miss World 2015. I would love more than anything else for the Philippines to clinch a 2nd Miss World title, of course. But my gut feel is saying that someone else is destined to wear the blue crown by the end of tonight’s show.

At China Central Television (CCTV) on your cable channel line-up, you can watch Miss World 2015 live. If you’re in the US, it will be aired over at the E! Channel. The live streaming links will be posted later before the show starts at 8 pm Manila time. – Rappler.com

Norman Tinio started pageant-blogging back in 2009 but has already been an avid pageant enthusiast since the early 70s. Apart from that, he is an industrial psychologist by profession, movie addict by nocturnal choice, and an ex-seminarian who can pray in ancient Latin. You can always find him and his daily musings at normannorman.com.