What to try at Precynct, a gem of a cafe along C-5 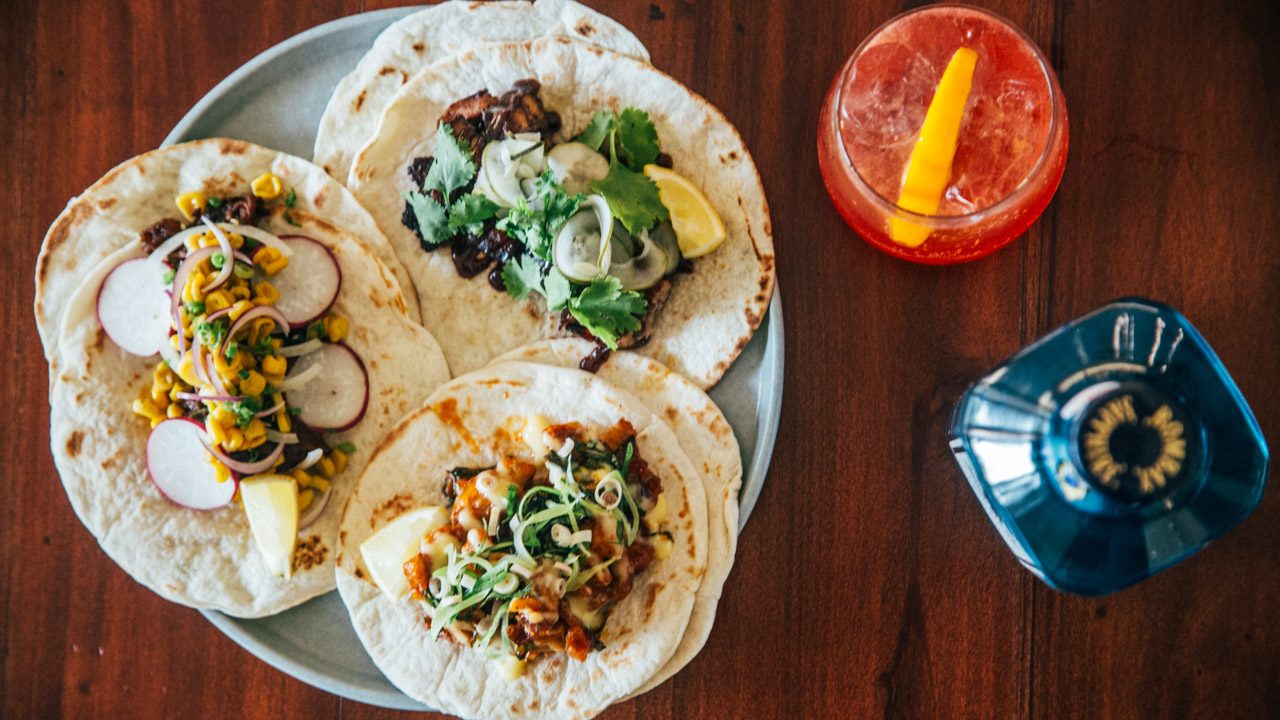 Facebook Twitter Copy URL
Copied
Enjoy specialty coffee, gin and tonics with tacos, and more at this hidden gem in a corner of C-5

MANILA, Philippines – Tucked in a corner of bustling C-5, The Grove by Rockwell hosts a number of hidden and unique gems such as Precynct.

Precynct touts itself as a café that draws inspiration from those of Melbourne, Australia, a city renowned for its coffee culture. In Manila, where coffee is often considered a utilitarian beverage to fuel workers throughout the day, this café is one of the exceptions. An Eater article compares Australia with how it’s like in the US, and it’s quite relatable: “Where mass coffee consumption in the US has long been connected with work and productivity, coffee culture in Australia is uniquely intertwined with leisure and relaxed beach-centric lifestyle.” This is pretty much what Precynct strives to be. It’s a relaxed, hole-in-the-wall sort of joint located in a rather posh neighborhood. One of its key features is a communal table, a hallmark of the cafés in Oz, which snakes through the center. Although the space can be quite laid-back, it’s their offerings that sets Precynct apart. Like cosmopolitan Melbourne, its menu is a smorgasbord of different cuisines. Although the Asian flavors stand out, it’s basically anything goes at this café, however, done well. It might be casual dining here; however, the food is anything but ordinary and its well-curated, progressive offerings may pique your interest. Here are some dishes and drinks to try: Afternoon T is Precynct’s take on an after-midday ritual. Instead of relaxing in the afternoon with tea and pastries, you have tonic, tacos, and toasts. 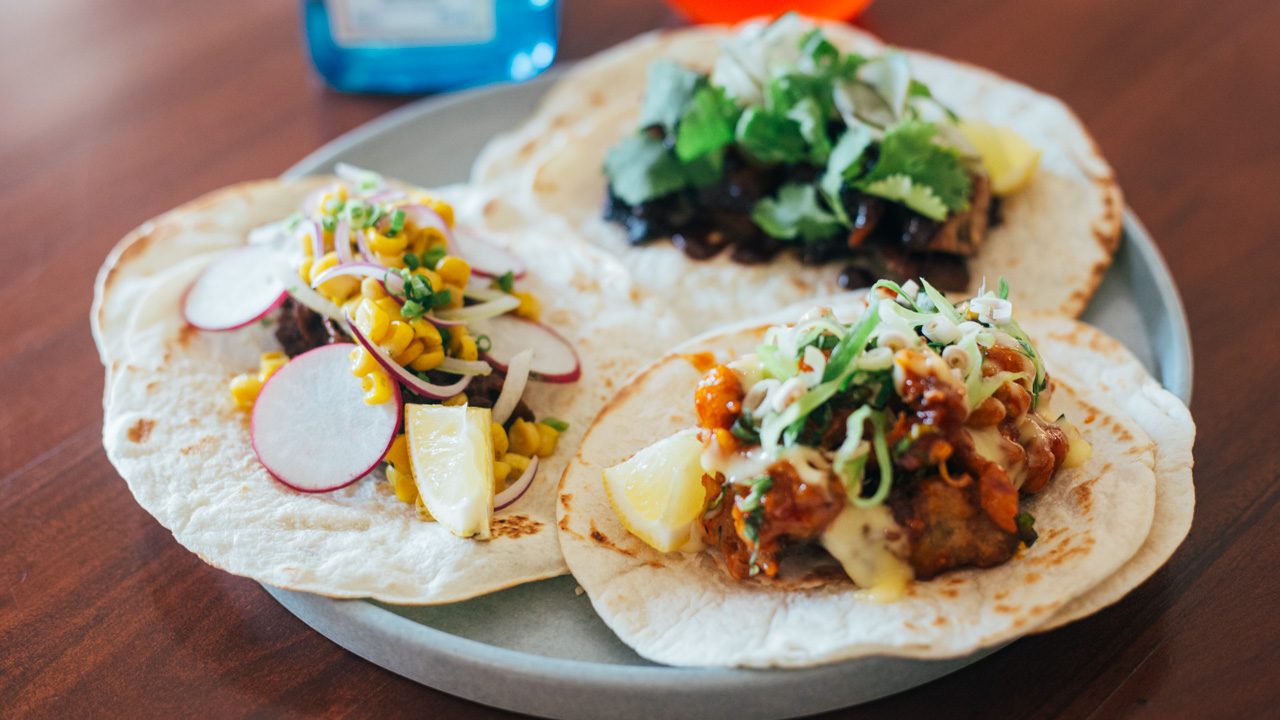 The elderflower gin tonic (Bombay Sapphire, East Imperial Tonic Water, St. Germain elderflower liqueur, ginger, and fresh mint, P390) can be perfectly acceptable to sip on even in the afternoon. Lucky Penny (Bombay Sapphire, house lavender syrup, Grenadine, lemon juice, soda water, seasonal fruit, P290) is a sweeter option. Even with Grenadine thrown into the cocktail, it’s not cloying. You’ll find a pleasant and complex mix of flavors in this one. If you would rather avoid booze early in the day, they have non-alcoholic options such as this Aperol and lavender tonic (P250): You can also create your own concoction (P390) from Precynct’s premium selection of small-batch gins and tonic waters. Pick 2 garnishes, and you’re all set for a pleasant buzz. Head chef Dolly Menghani tells us the papadum is close to her, growing up in an Indian household, and the one that she is serving at Precynct is a special take on it.

Slices of 72-hour cured salmon and tandoori chicken are put on top of the papadum, a crispy, cracker-like flour disc. A drizzling of Bukidnon honey cuts through the sharp flavors of the tandoori. Sweet pumpkin is slathered with intense, umami-rich miso – a nice variation to the sweet and savory tandem. Succulent pork belly is glazed with Hoisin sauce and Chinese five-spice powder for some zing. Beneath it, rice is mixed with basil and red peppers for an added fragrant and savory edge. So as not to overwhelm, slices of cucumber and green apple lend a refreshing note to this tasty ensemble. Freshly baked mamon, which is a familiar Filipino favorite, sits on a bed of Kaya coconut jam and is sprinkled with more coconut shavings. For aroma, it is infused with lavender. Precynct serves specialty-grade coffee roasted by Yardstick Coffee in Makati (its head roaster and co-founder, Andre Chanco, is co-owner). Its house blend, Thirsty, is composed of beans from Brazil, Colombia, and Benguet in the northern Philippines.

There’s space for more playful experiments with coffee at Precynct, while its sister Third Wave café, Yardstick, sticks to handcrafted brews, lattes, and the like. Take for example, the cherry mocha – making it involves a bit of spectacle. Cherry wood smoke is used to reduce the bitterness of the Trinitario and Forastero chocolate.

After a few minutes of steeping in the smoke, the chocolate is ready to pour on the coffee. Enjoy your drink with a sprinkle of Maldon salt.

Specialty coffee with a twist: Cherry Mocha at @precynct pic.twitter.com/Gf4USarKog

Which dishes or beverages that you read here would you like to try at Precynct? Let us know in the comments. – Rappler.com

Precynct is located at G/F The Grove by Rockwell, C-5, Pasig City. Brunch is at 10am to 6pm, while dinner service is at 6:30pm to 10pm.
Facebook | Twitter | Instagram

All photos by Paolo Abad/Rappler