Lopez Museum’s ‘Drawing the Lines’ exhibition: The art of news 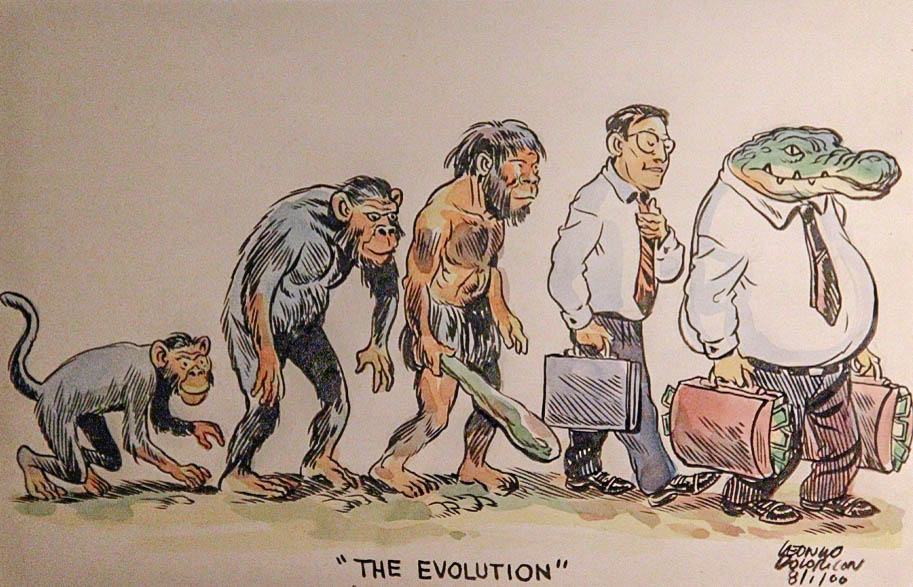 MANILA, Philippines – Corrupt and murderous political dynasties lord over entire provinces. Floods and traffic ensnare commuters in the city. High taxes and low wages force people to work in oppressive conditions abroad. The Philippines gets caught between the encroachment of communist China and the meddling of former colonizer United States – none of this is new. It’s always been in the news.

See for yourself the editorial cartoons, magazine covers, and propaganda paintings from half a century ago, with some works even much older, at the Lopez Museum and Library’s current exhibition, Drawing the Lines. 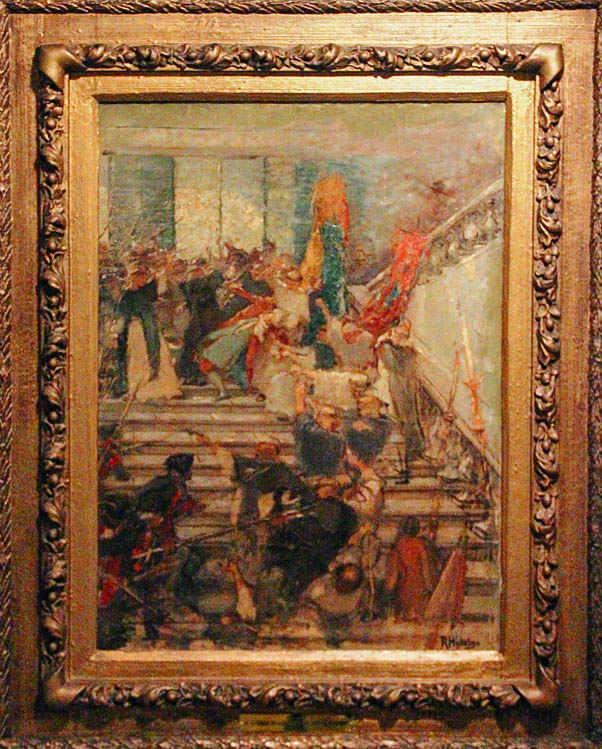 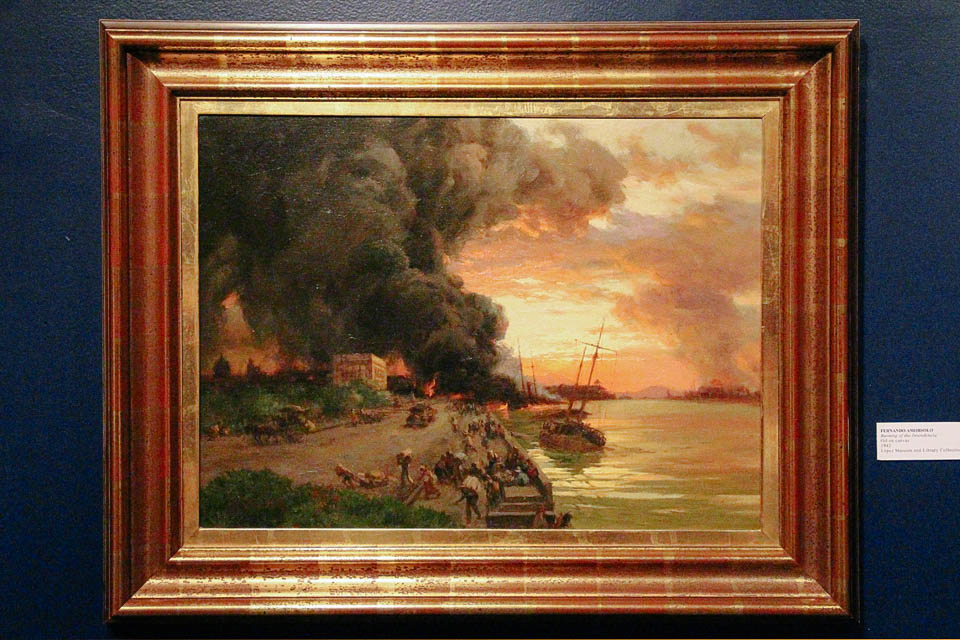 The timely exhibition opened on February 26 – a day after the 30th anniversary of the first People Power Revolt that toppled the Marcos dictatorship. It runs the entire Philippine presidential campaign period, only to close on July 8 – 60 days after the presidential elections on May 9. 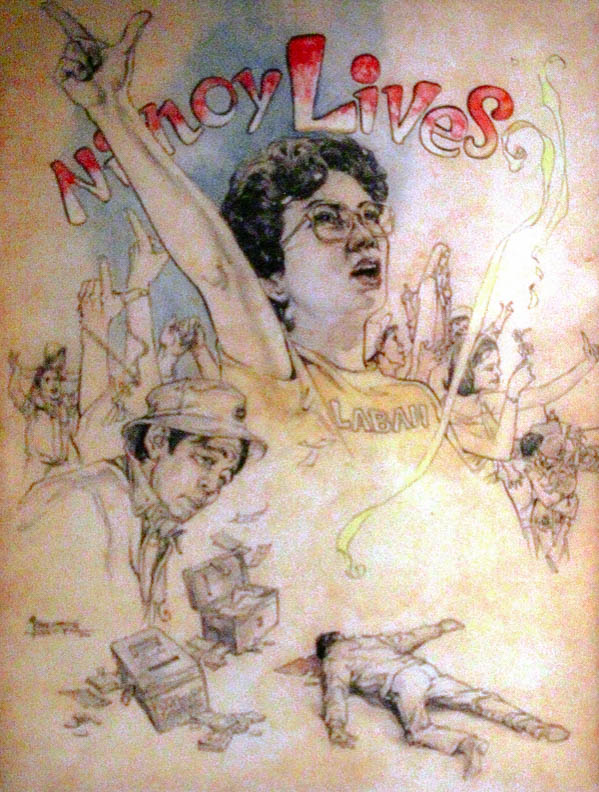 The Lopez Museum and Library, located at the Benpres Building, Exchange Road corner Meralco Avenue, Ortigas Center, is a most apt venue for the exhibit. It was the office building of the Manila Chronicle newspaper, a critical exponent of press freedom that was shut down by the Marcos regime two days after the declaration of martial law on September 21, 1972.

Besides combining the museum’s treasure trove of Luna, Hidalgo, Amorsolo, and other masterpieces of Philippine art, the exhibit also mines the library’s archive – a collection that spans 600 years and over 20,000 titles – to create a narrative made with editorial cartoons, magazine and book cover designs, paintings, and sketches.

It is a brief history of the nation told through the social commentary of artists. Drawing the Lines is an exhibition that only the Lopez Memorial Museum and Library can mount.

Old-time visitors returning to the museum will see many familiar works from the permanent exhibit juxtaposed with new additions to the collection, as well as never-before-seen works from the archives. 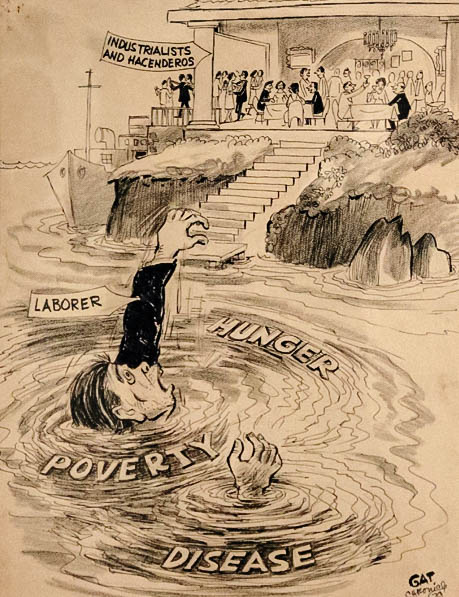 Ricky Francisco, curator for this show, reveals, “Since 2000, we’ve started having changing exhibits for conservation purposes as well as to restudy our collection. We’ve had changed exhibits twice a year where we usually invite contemporary artists to interact with our collection. But this year, instead of inviting contemporary artists, we created a dialogue between political cartoons and out permanent collection. This is in line also with the upcoming elections.” 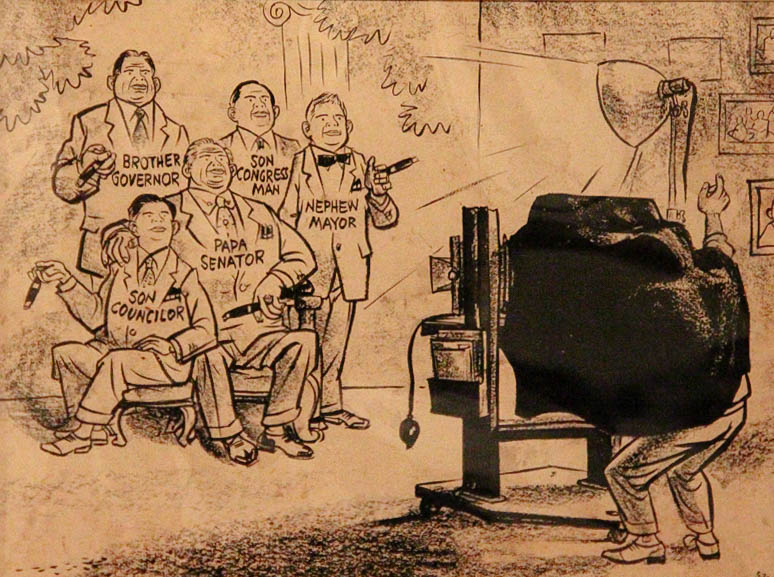 Francisco explains, “These prints, they are all about the Filipino nation. We were really interested in studying political cartoons as social realism. We think it’s very effective because it has the farthest reach. Political cartoons have at least 50,000 readership and they stay on, get passed around even when it’s used to wrap dried fish in the market.”

A tour of the exhibit reveals Felix Hidalgo’s propaganda work for the colonial American authorities, Per Pacem et Libertatem [For Peace and Liberty] in 1904, which shows the United States as a protector of the Philippines instead of being the colonial power that it was. There is also Juan Luna’s pre-revolutionary naivety and colonial adoration in his work Espana y Filipinas (1886), which shows Mother Spain helpfully leading the maiden Philippines towards the light, instead of portraying a rapacious relationship. 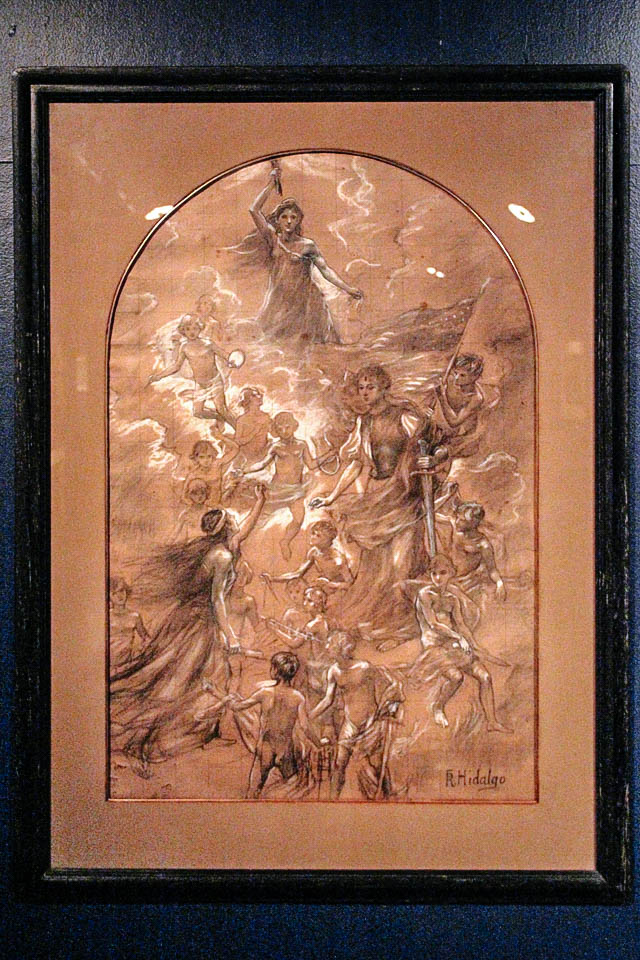 Many famous artists such as Danilo Dalena and Francisco Coching began work as newspaper cartoonists and magazine illustrators “because painting did not pay [then],” Francisco notes. 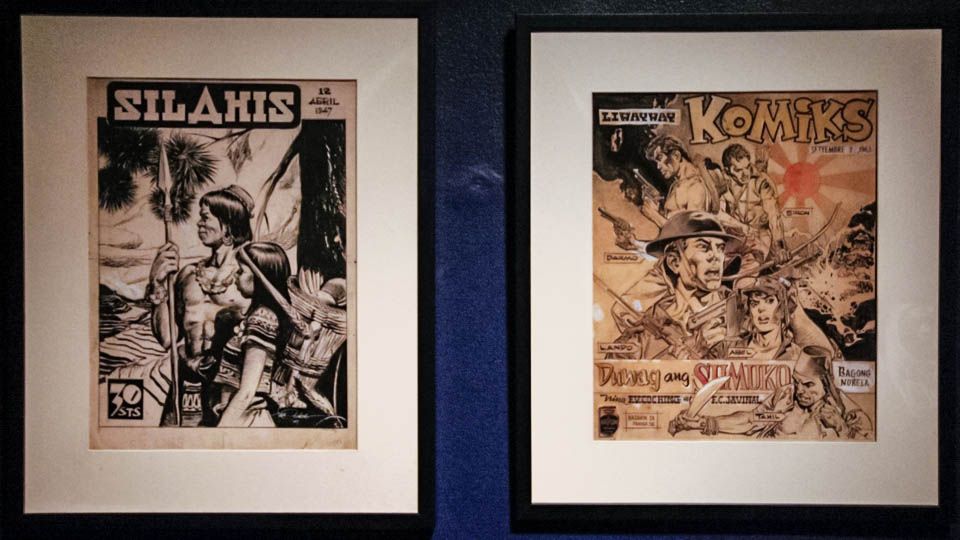 The genius of Esmeraldo Z. Izon for editorial cartoons is apparent. His style is now indented with the the Philippine Free Press, the publication for which he worked for. Fortunately, his family donated to the museum more than 300 of his works to the Lopez Museum. 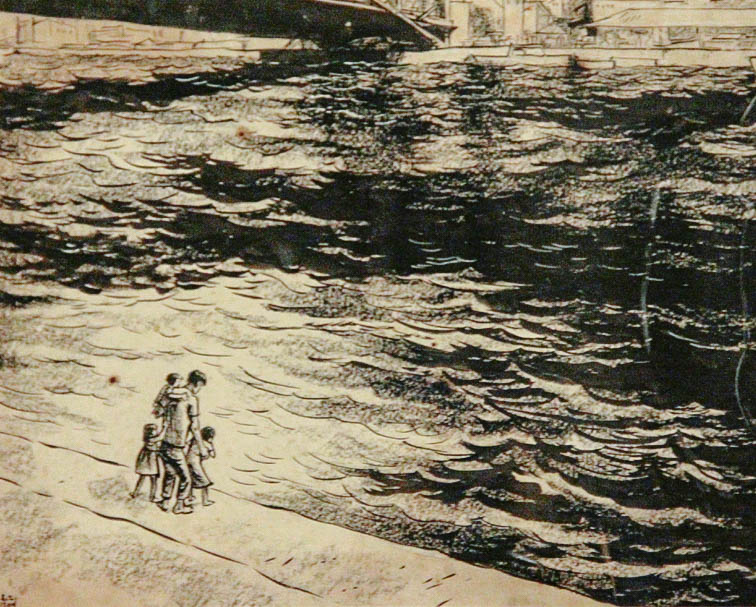 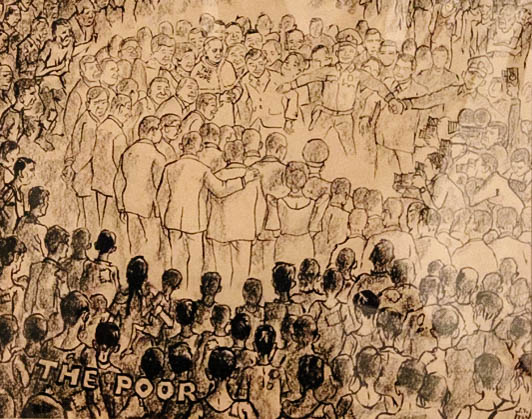 The issues that have been illustrated are truly indelible. Cartoons bemoan the flooding in Metro Manila was made in the late 1940s. An illustration scoring slaying of political rivals refers to specific murders in 1952. 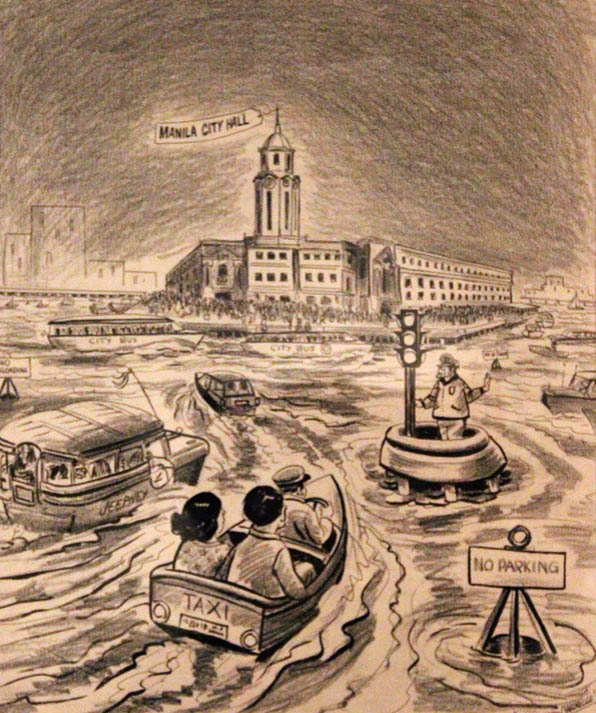 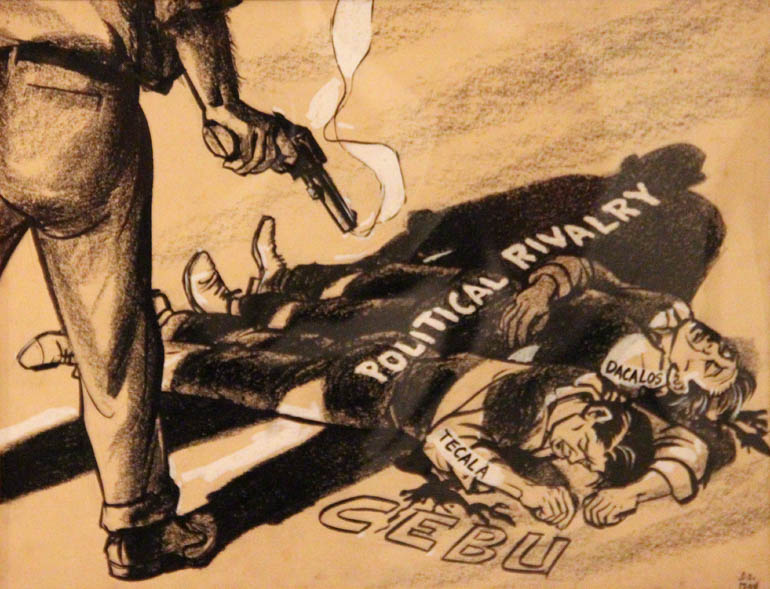 Many of the last names of the subjects portrayed are all too familiar: Marcos, Roxas, Estrada, and Aquino, to name a few. These inadvertently indict the Philippines of indulging for far too long dynastic politics. Even more glaring is the absence of any editorial cartoons from 1972 to 1981, the time of martial rule under the Marcos dictatorship. 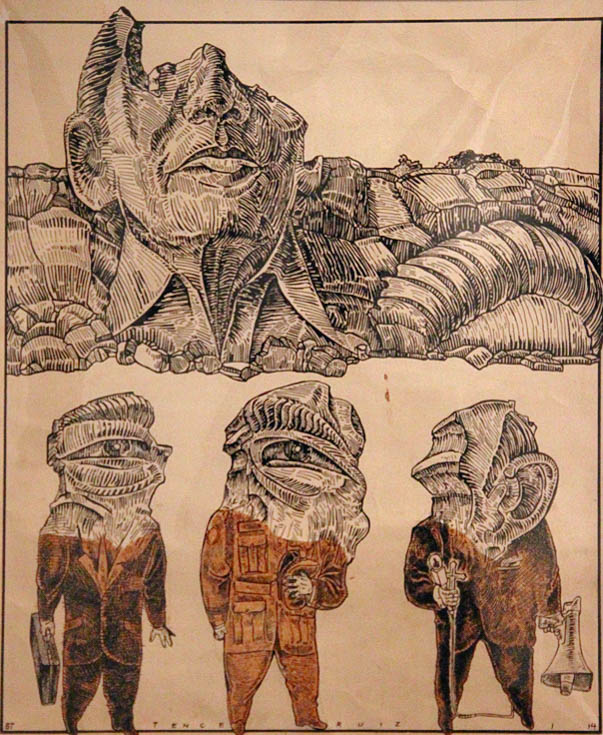 What is both refreshing and unnerving is how extremely relevant and timely most of the cartoons and paintings still are. The problems that the Philippines had a more than half a century ago are still the same problems ‘that the nation face today. The artworks are a pleasure to behold for their sheer beauty and power, but are also a punch in the gut for their poignancy and insight. 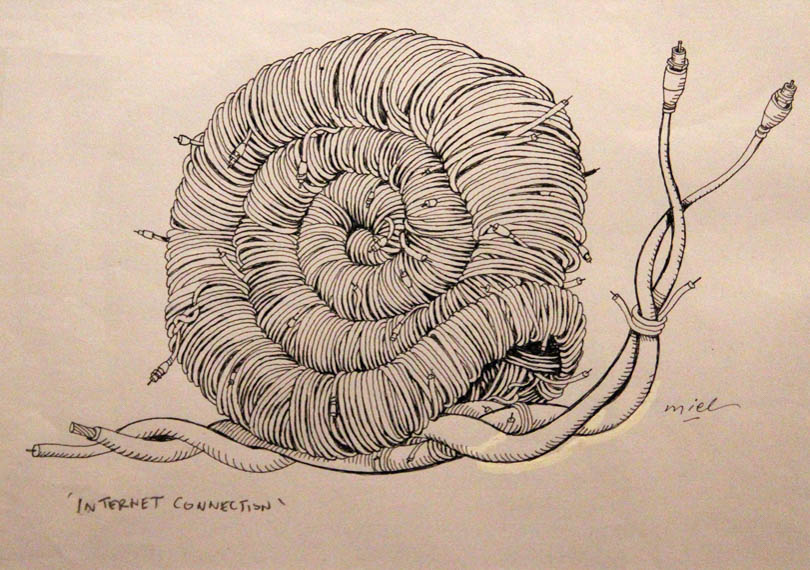 In the digital age when political cartoons live on indefinitely as memes – spreading virally 24/7 globally through social media – these works that have been carefully preserved and opportunely displayed by the Lopez Museum are more powerful than ever. To reveal them to a new generation is to unleash them. Once and future tyrants beware. – Rappler.com

The Lopez Memorial Museum and Library is open Mondays to Saturdays, 8am to 5pm. It is located at the Benpres Building, Exchange Road corner Meralco Avenue, Ortigas Center.

All photos by Rome Jorge/Rappler