Facebook Twitter Copy URL
Copied
This is the story behind those viral illustrations of Philippine politicians, which many have praised for its positive and encouraging tone. Artist Hyks Gantioqui, an art director, shares what inspired his elections-themed artwork

MANILA, Philippines – The elections are done. The Philippines is now waiting for president Rodrigo Duterte’s inaguration and the results of the vice-president race.

Amid the flurry of news around the election results, a series of drawings went viral, showing the presidential and VP candidates in different scenarios, all in a positive light. There’s one of Duterte talking with Canadian Prime Minister Justin Trudeau. Duterte’s camp said that his cabinet will be patterned after Trudeau’s, where “sectors are properly represented.” Here’s one of Mar Roxas with his wife Korina Sanchez Roxas.

Behind these drawing is Jerico “Hyks” Gantioqui, a 38-year-old art director. In an interview with Rappler via email, Gantioqui shared  that comes from a family of architects and artists and that he has always loved to draw people in everyday situations with a touch of fun.

Here are more drawings courtesy of the artist.

“‘Air Alan’ – Senator Alan Peter Cayetano played basketball with team Du30 after the elections. Together with Senator Pia, they show the perfect example of how to have ‘sibling camaraderie.’ For sure their dad is proud of them both as are we,” he wrote in the Facebook caption. 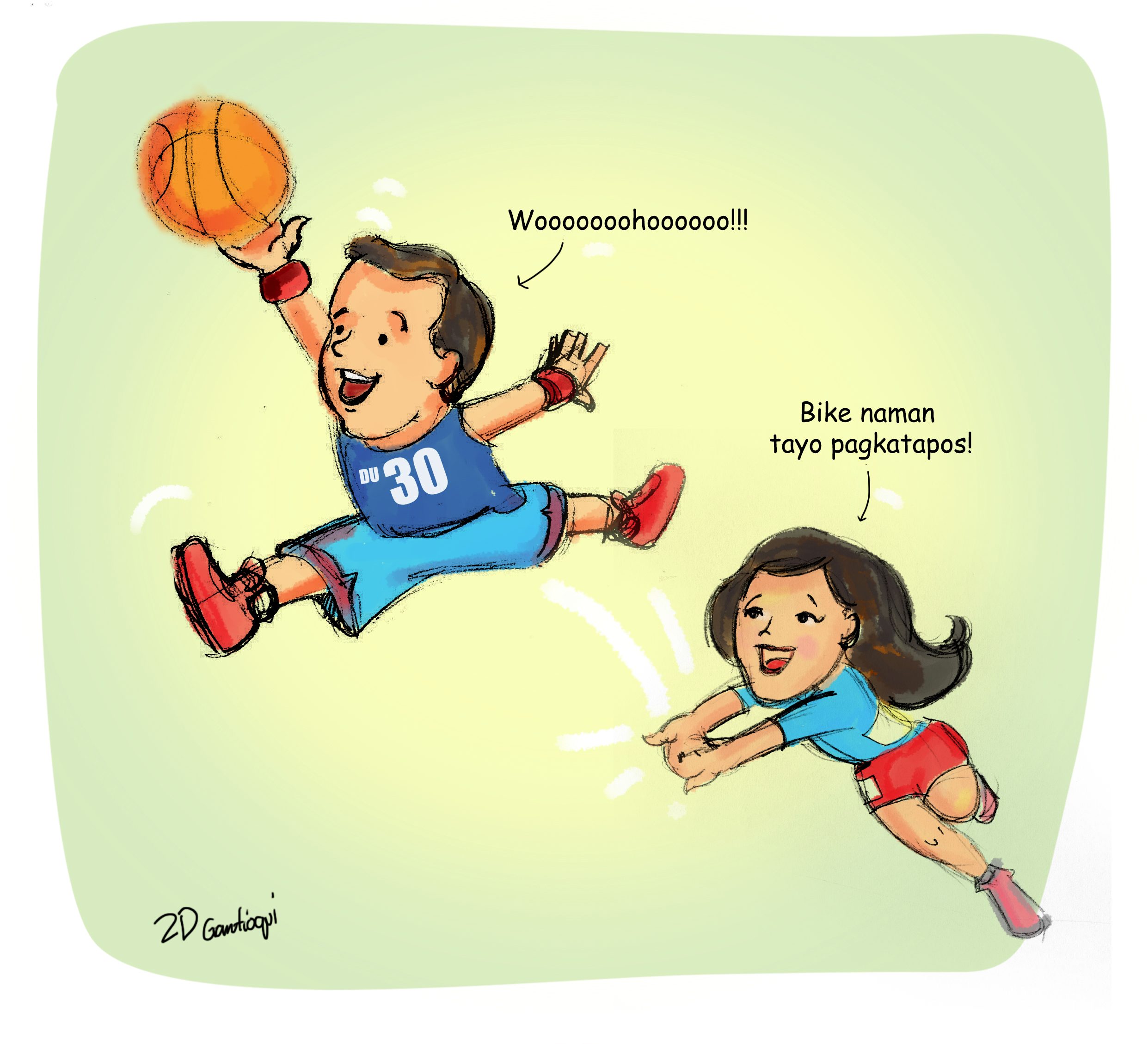 “‘Victory & defiance of the brown man’ – VP Binay refused to concede after almost everyone else walked away [note: he later did congratulate Duterte] – a fighting attitude we all need now more than ever despite the odds. His loving daughter’s win as Makati mayor is a testament from the people he helped in the city,” captioned Gantioqui. Gantioqui said he was inspired to start sketching and drawing after he felt the elections was getting in the way of people’s relationships, especially on social media.

“I was one of the netizens who felt suffocated by all the fights on social media. The past few months were full of negativity. I felt that our society was in a downward spiral.

“Being divided at the height of the election campaign, I felt that there’s goodness in each and every one of the candidates, and everyone, myself included, seems to have forgotten that,” he said.

“I made these drawings in line with Mayor Rodrigo Duterte’s call for healing. What if I shared something positive for a change? A breath of fresh air that I can share with friends? and so I made these sketches.”

Gantioqui said he was surprised to find out that people just started sharing the drawings online. He said he just got word from his family and friends that it was being liked and passed around on social media.

“[I] was not expecting it. Friends and cousins were teling me that the drawings went viral.

“I prayed and thanked God that in a small way people embraced positivity for a change when it comes to the elections,” he said.

Gantioqui said that in some way, his drawings made people happy, following an election that saw many relationships tested.

“[This shows] the way how people are reminded that everyone of these candidates have innate goodness in them. That after the elections they are still human, with flaws and some weak moments and therefore at the end of the day, everything is still up to us to help out in our own little ways and build progress,” Gantioqui said.

“This is proof that despite our differences, we could still get along. An experience that led me to believe that a small effort with good intent could come a long way.