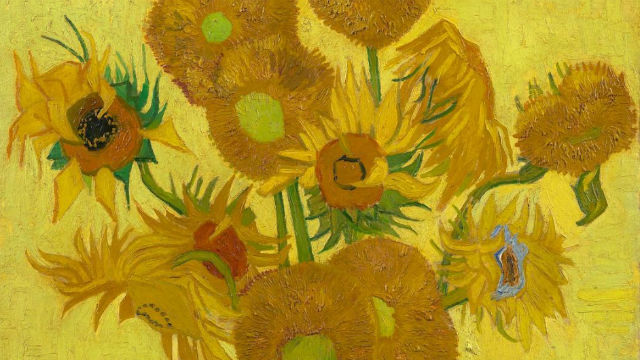 THE HAGUE, Netherlands – Five versions of Vincent van Gogh’s masterpiece painting “Sunflowers” will be united across 3 continents for the first time on Monday, August 14 via a consecutive livestream feed, the Van Gogh museum in Amsterdam has said.

“On Monday… Facebook is hosting 5 consecutive livestreams in which international museum directors and conservators present the version of Sunflowers in their own institution,” the museum said on its website.

“Five different Sunflowers paintings will be reunited in this way for the first time in history.”

Van Gogh’s five (!) Sunflowers are united for the first time. Located on three continents the five masterpieces are presented side by side in a virtual gallery. Join Willem van Gogh, great-grandson of Vincent’s brother Theo van Gogh, for a 360°-tour on our Facebookpage. #VincentvanGogh #SunflowersLIVE

The livestream video in which the participating museums will each offer their insights into the different versions of Sunflowers will begin with London’s National Gallery at 1650 GMT.

Amsterdam’s Van Gogh Museum will follow at 1710 GMT, before handing the baton to the Neue Pinakothek in Munich at 1730, with the Philadelphia Museum of Art showing off its version at 1750 GMT.

Finally, a previously recorded video made by the Seiji Togo Memorial Sompo Japan Nipponkoa Museum of Art in Tokyo will be played at 1810 GMT.

“But because the 5 paintings are spread across different continents, it has never been possible to view them together.”

“That has now changed. We’re immensely proud of this milestone, which aligns perfectly with the Van Gogh Museum’s mission: to make the life and work of Vincent van Gogh accessible,” Rueger said in the statement.

The Sunflowers paintings, which rank among the Dutch master’s most famous works, were painted between 1888-89 while Van Gogh was living in Arles in the south of France.

Sunflowers had a special significance for Van Gogh, who once wrote in a letter to a friend that they conveyed “gratitude”.

Willem van Gogh, the great-grandson of Vincent’s brother Theo van Gogh and who is an advisor to the Van Gogh Museums’ administrators, also describes his personal memories of the Sunflowers in this digital exhibition.

For those who cannot wait until Monday evening, the various museums have put together a virtual display on their Facebook pages where the 5 paintings can be viewed together in a virtual gallery, called “Sunflowers 360”. – Rappler.com